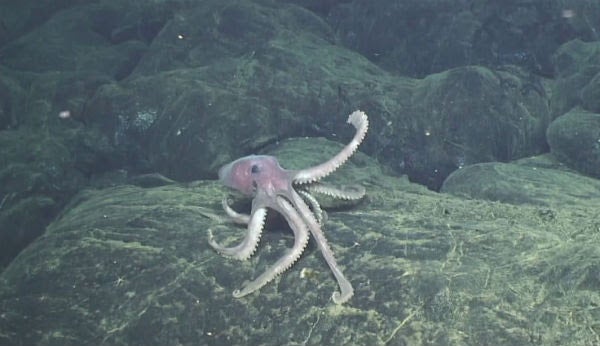 Last year the most active submarine volcano in the Northeast Pacific erupted, triggering over 200,000 earthquakes 300 miles off the coast of Oregon.

The frenzy of activity at the volcano—Axial Seamount—was recorded by a newly established underwater observatory called the Ocean Observatories Initiative Cabled Array, which came into operation just before moving magma triggered the quakes.

It was a remarkable chance to witness an eruption in real time—and researchers were actually able to predict that the eruption was going to happen. In two papers published Thursday in Science, researchers describe observations from the eruption.

In the first paper, Scott Nooner and colleagues describe how previous observations of eruptions at that volcano allowed researchers to predict that it would erupt in 2015. Axial Seamount has erupted three times in recent history: once in 1998, then in 2011, and again in 2015. Between each eruption, the seafloor inflates as the magma chamber just below the surface fills with magma. Then it reaches a tipping point and erupts, deflates, and starts to fill up again.

“We’ve been measuring the deformation over this volcano for a long time,” Nooner says. “We saw an eruption in 1998, during which the seafloor dropped about 3.5 meters [11.5 feet]. It was a really large drop in the surface elevation of the volcano, and then it slowly started inflating again.”

The surface of the volcano kept rising by about 6 inches a year until it erupted again in 2011. But it didn’t deflate quite as far, and the rate of inflation suddenly increased to a little under 24 inches per year. Using data from the past eruption, Nooner and colleagues were able to predict that the volcano would erupt in 2015, which it did.

The volcano is now re-inflating at a rate somewhere between the slow and steady period that scientists saw between 1998-2011 and the rapid inflation between 2011 and 2015. Nooner estimates that if the current rate—about 19 inches per year—continues, the next eruption could be in about 3 years.

But the data from under the sea didn’t just tell researchers when the eruption would happen, but also how it was happening. “By looking at the pattern of deformation on the surface, we could tell that the magma was being injected into this nearly vertical conduit beneath the volcano, and that was what was swelling,” Nooner said. That conduit also became the path for the magma to follow during the eruption itself, when the lava burst onto the seafloor. 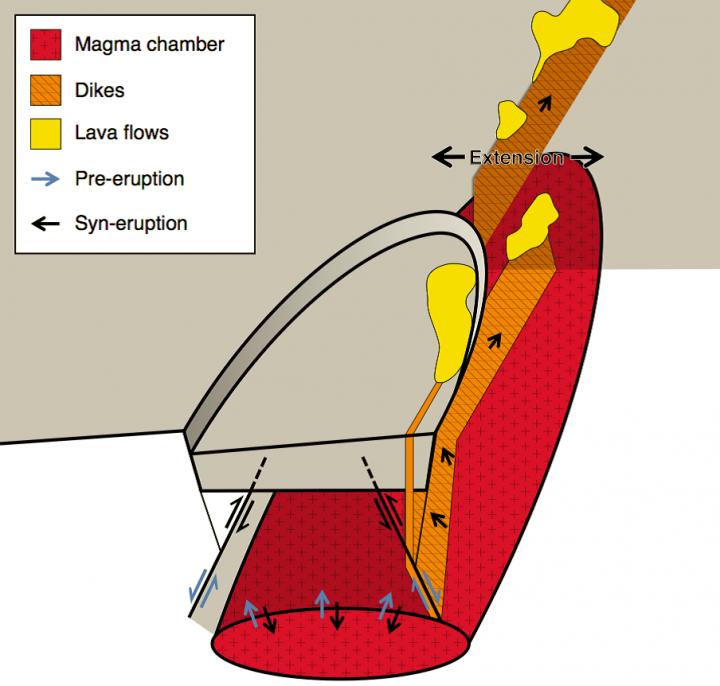 A diagram of the interior of Axial Seamount. The black lines in the center with the arrows on either side indicate the outward facing ring fault. This curcular structure was the surface that moved during the 2015 eruption.

The 2015 eruption at Axial was accompanied by a lot of shaking. In the second Science paper William Wilcock and colleagues describe what they’ve learned from the 2015 eruption itself. Their data comes from the Cabled Array, an array of scientific instruments tethered permanently to a power source that allows them to run indefinitely, making long-scale observations.

“It’s very difficult to deploy instruments to record eruptions autonomously, because it’s very difficult to predict when they’re going to occur. You need a network in place on the order of a decade in order to capture one,” Wilcock says. Previous attempts to deploy autonomous instruments to monitor an eruption were less than ideal, because their power sources need refreshing. And despite the success of Nooner, volcanic eruptions are notoriously difficult to predict. On a previous mission to study another volcano, research was stymied briefly when the sensors actually got lost in the lava.

That’s where the Cabled Array comes in. “This cable basically has given us the ability to have instruments in place for perhaps a few decades and observe multiple volcanic cycles,” Wilcock says.

Because the array was turned on in 2014, Wilcock and colleagues were able to see the tail end of one of these eruptive cycles, with seismometers on the array recording 2,000 earthquakes a day as the eruption neared. Now, Wilcock and others are watching the array to see how the volcano acts during its downtime.

They’ve already seen some interesting results. In this paper, Wilcock and others found that the numbers of earthquakes increased dramatically during low tides, when the pressure of water above the volcano lessened and the faults were able to move more freely. They also were able to peek inside the volcano and add some additional data to a long-standing debate about its architecture. At the site of the volcano is a ring fault, a circular crack that goes around its interior.

“There’s been sort of a controversy about how ring faults work,” Wilcock said. Using the earthquakes as a kind of sonar to peer into the center of the earthquake, they were able to determine that during the eruption at Axial Seamount, the active ring fault was sloped outwards, almost like a traffic cone. “As the volcano inflates, it pushes the sides of the volcano outward, almost like pushing a cork into a bottle, then when the volcano erupts, it subsides down and the whole volcano collapses.”

That’s significant, because there had been debate for years as to whether the inward sloping (think: ice cream cone) or outward sloping ring faults were active during an eruption. At this volcano, at least, it looks like the outward ring faults are more active.

Axial Seamount, as complicated as it is, is considered a pretty simple volcano, without too many added factors to muddle the research. Magma at Axial only has to travel a short distance to reach the surface, while land-based volcano magma has to travel through many more miles of the Earth’s crust to break free. That makes Axial the perfect place to start digging into the basic science of what makes a volcano tick, and researchers are looking forward to using the Cabled Array to answer some of the most basic questions about the most volatile rocks on Earth.

There’s a lot to learn, but luckily it seems as if volcano research is about to explode.