No meat was contaminated, but the rare gene could easily spread 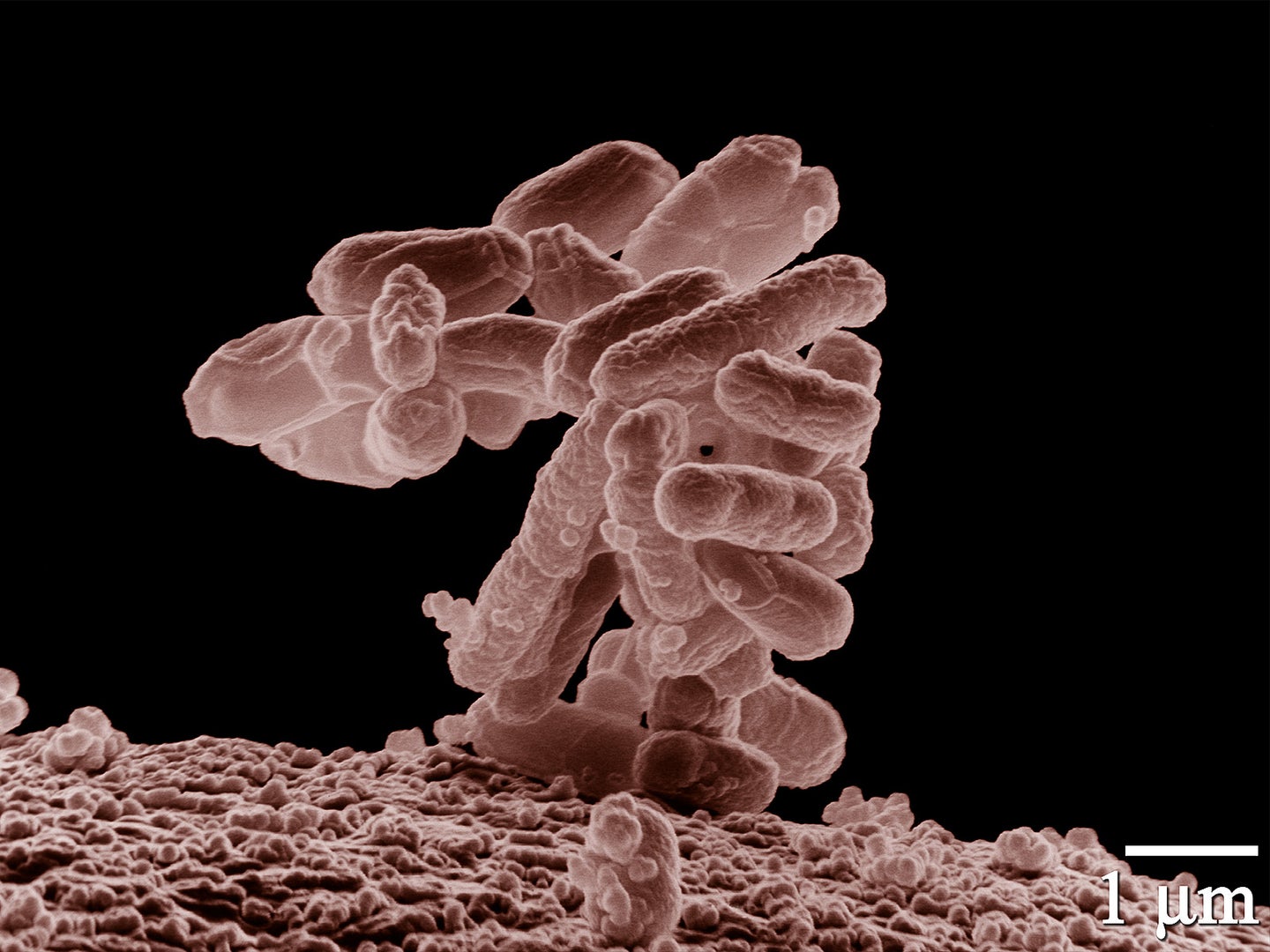 Escherichia coli is a member of the Enterobacteriaceae family of bacteria and is found in the human gut. Researchers have found several species of bacteria, including E. coli, carrying a gene that confers resistance to a class of last-resort antibiotics on a swine farm. Agricultural Research Service
SHARE

Bacteria carrying a gene that grants resistance against a powerful antibiotic have been found on a pig farm in the United States, researchers reported this week in the journal Antimicrobial Agents and Chemotherapy.

The rare gene helps bacteria thwart carbapenems, a class of antibiotics used to fight germs that have already become resistant to other drugs. It was located on pieces of DNA called plasmids, which can be swapped between species. This is the first time that bacteria with transmissible carbapenem resistance have shown up in US livestock.

The good news is that these germs (a group known as carbapenem-resistant Enterobacteriaceae, or CRE) didn’t appear in any of the poop samples taken from pigs scheduled for slaughter. So it doesn’t seem likely that they contaminated any pork from the farm.

“The concern is that bacteria with this gene on this plasmid could be carried by the pigs into the food supply, where consumers could be exposed and colonized,” says coauthor Thomas Wittum of the Ohio State University College of Veterinary Medicine. “We found no evidence that was happening at this farm, but we want to figure out how to be sure that doesn’t happen.”

What did they find?

The bacteria harboring the gene don’t normally cause disease in healthy people. They can, however, cause serious infections in hospitals, and up to half of people who get bloodstream infections of CRE die.

And because the resistance gene can be easily transmitted between different kinds of bacteria, CRE could confer this dangerous ability to microbes that sicken people more often. “These bacteria can be a reservoir of resistance genes that they can share with pathogens like salmonella,” Wittum says. “Carbapenems are one of our most important life-saving antibiotics, so that bacteria are becoming resistant is extremely concerning.”

This isn’t the first time bacteria resistant to these last-resort drugs have been found in livestock; they were reported in cattle feces earlier this year. But those bacteria carried the genes on their chromosomes (threadlike structures that carry most of the genetic material in bacteria, humans, and other life forms), and so can only spread them to their descendants.

The germs on the pig farm carried resistance genes on plasmids, which are separate rings of self-replicating DNA. “Some plasmids don’t move very easily because they only like certain bacteria,” Wittum says. But the plasmid found carrying CRE resistance genes does not appear to care what bacteria carries it. “This one seems to move especially easily between bacteria.”

Where did it come from?

Wittum and his colleagues identified the gene on a family-run farm with 1,500 sows while doing surveillance for antibiotic resistance in agricultural animals. The team used Swiffer mops and gauze swabs to collect pig poop and other microbial samples from the floors, walls, and surfaces over a five-month period in 2015.

The carbapenem-resistant germs were mostly found in the pigs’ surroundings. The team has since discovered them in feces from some sows and piglets, although none of them showed signs of illness.

The gene in allows bacteria to make an enzyme that breaks down carbapenems. It’s “an especially rare gene that has only been reported twice before in the US and only a few times in the world,” Wittum says.

Carbapenems aren’t even used in animals, so it’s surprising that a gene designed to resist them would show up on a farm. “We really don’t know where this gene came from, but it most likely emerged in a human healthcare environment and somehow was introduced onto the farm through the movements of people,” Wittum says. “We do not believe this resistance gene emerged on this farm, it was almost certainly introduced from the outside.”

But pigs are routinely given other antibiotics, and it’s a major contributor to the overall problem of antibiotic resistance. “Any time that antibiotics are used they provide selection pressure, favoring resistant strains, because competition is reduced,” Wittum says. So other antibiotics used to treat sick pigs may have allowed the carbapenem-resistant bacteria to flourish.

To prevent resistant genes from traveling into the human population, farms will have to be closely monitored. “We need to know if there are other farms out there like this one, or if this is just an isolated rare occurrence,” Wittum says.

It’s also important to understand the role drugs used to treat sick pigs play in helping resistant genes spread. “We can’t just stop using antibiotics to treat sick animals,” Wittum says. But there may be steps we can take to prevent resistant strains from spreading.