Now let's see if he can make it reality 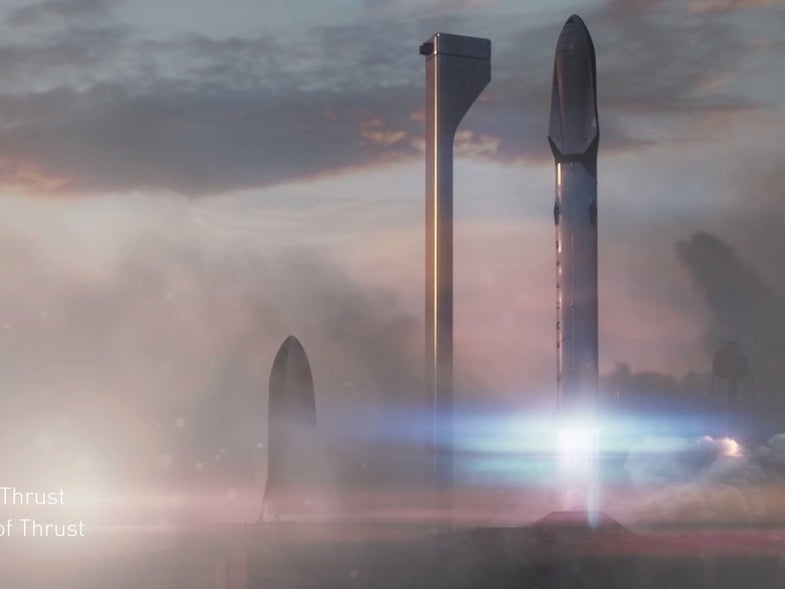 Speaking at the International Astronautical Congress in Guadalajara, he unveiled a mission architecture that is bold, inspiring, and a little crazy. It all centers around the Interplanetary Transport System–a 55-foot-wide pod-shaped spaceship designed to carry 100 people or 100 tons of cargo–that would ride into orbit on a really big freakin’ rocket. And he hopes the two could take off on a journey to Mars in as little as 10 years, although he acknowledges that timeline depends on a lot of factors.

At 400 feet tall, SpaceX’s Mars rocket would be the largest rocket ever (take that, Jeff Bezos). A CGI video shows it lifting off with nearly 29 million pounds of thrust, compared to the 7.5 million of the Saturn V rocket that took Neil Armstrong to the moon. It’ll need that extra oomph to carry a crew and cargo across the tens of millions of miles of empty space between here and Mars.

Although the rocket is still a concept, SpaceX recently test-fired its Raptor engine, 42 of which would boost the rocket off of Earth.

But the crux of Musk’s talk was about bringing down costs so that regular people might be able to afford it. SpaceX is trying to move the price point for a ride to Mars down from $10 billion per person to $200 thousand or less. The Mars-bound spaceship would launch with its fuel tanks empty to save weight and expense, then fuel up in orbit. Musk says this would make the plan 500 percent cheaper than it would be without in-orbit fueling.

Reusability and choosing the right propellant type will also be key. The new rocket will run on methane, because that’s easy to produce on Mars to fuel return trips to Earth, and it doesn’t require loads of insulation and cryogenic cooling the way a liquid hydrogen fuel would.

As for the spaceship itself, Musk says it could carry up to 450 tons of stuff to Mars. NASA has previously estimated we’d need 100 tons or more, so that seems like a good start to seed a colony of 1 million people, which Musk hopes to achieve over time. The spaceship could see its first test flights within about 4 years, with the first flights to Mars shortly thereafter.

The spaceship could eventually make the journey from Earth to Mars in 30 to 80 days, according to Musk. And it doesn’t have to stop there. Since the vehicle can refuel in orbit, SpaceX could potentially set up fuel depots in strategic locations to send the Interplanetary Transport System beyond Mars.

“This system really gives you freedom to go anywhere you want in the solar system,” said Musk. “I wouldn’t recommend this for interstellar journeys, but this system–provided we have filling stations along the way–means full access to the entire greater solar system.” In particular, he’s eyeing a mission to Europa–something we actually suggested a few days ago.

As for radiation-proofing the spaceship–one of the major challenges to a trip to Mars–Musk does not seem particularly concerned, possibly because the only screening criterion for a ticket to Mars is that the passenger is prepared to die. (Perhaps this is where a public-private partnership with NASA could come in handy.)

“The probability of death is quite high on the first mission,” said Musk with his characteristic bluntness. In other words, getting to Mars ain’t gonna be easy. The dream that Musk laid out today is dangerous. Actually, dangerous probably doesn’t do the risk justice. Neither does ambitious, in reference to the scope of the plan. But also: hell yeah.

Let’s check back in with the idea: Space-X will construct the largest rocket ever built, launch a new kind of spaceship, and deploy an in-orbit refueling system straight outta sci-fi. Then it will send that package–along with 100 souls–to Mars within the next 10 years. Quixotic? Sure. But quotidian dreams and easy missions don’t win you screaming fans who want to rush the stage after your dry, late-starting press conferences.

“It would be an incredible adventure,” says Musk. “It would be the most exciting thing that I could possibly imagine. Life needs to be more than just solving problems every day. You need to wake up and be excited about the future, to be inspired and want to live.”

Unfortunately, you’ve also got to be prepared to die for it. And no doubt hundreds of people will be willing to take that risk on the first flight of the Interplanetary Transport System, whenever it takes off.