Space is hard, and Mars is even harder 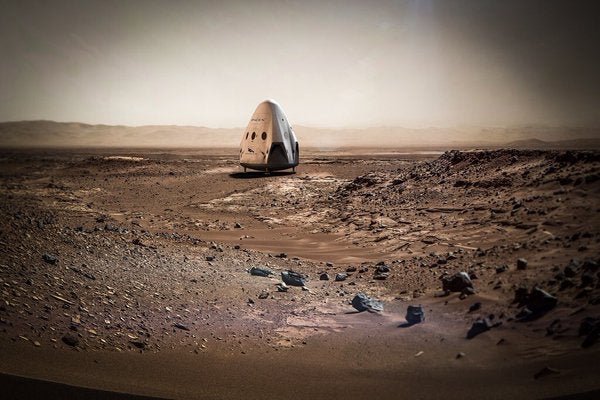 SpaceX made headlines on April 27, 2016, by tweeting it planned to launch its first Mars mission as early as 2018. SpaceX/Twitter
SHARE

Elon Musk doesn’t let a silly thing like a rocket explosion deter him from dreaming big. Even though SpaceX‘s Falcon 9 is grounded after a fiery demise on September 1, the CEO will take the stage at a conference next week to discuss “Making Humans a Multiplanetary Species.”

During the talk, Musk plans to “focus on potential architectures for colonizing the Red Planet.” In other words, he’ll likely be laying out SpaceX’s plan to put humans on Mars.

What we know so far is that Musk hopes to launch an uncrewed Dragon to Mars, to practice landing with its retrorockets, as soon as 2018. He thinks the company could carry the first humans to Mars as soon as 2025.

But getting there (and back) certainly won’t be easy. Here are some of the biggest challenges Musk and others will need to overcome before we can set sail for another planet.

1. How are we getting there?

Although SpaceX’s current Falcon 9 rocket could technically deliver a payload to Mars, it wouldn’t be a very large one. NASA estimates a crewed mission to Mars will require 100 tons of cargo or more. So we’re going to need a bigger rocket, and SpaceX is working on that.

The Falcon Heavy should be capable of taking crew to Mars, although it would need a few trips to deliver all that cargo. The heavy-living rocket was originally supposed to launch in 2013, but the date keeps getting pushed back. After the September 1 explosion, the Falcon Heavy’s maiden launch got delayed again from November to the first quarter of 2017.

We’re also going to need a bigger spaceship. The Crew Dragon, like other crew capsules designed to get astronauts into Earth orbit, has enough room for a few people to stand up inside, but it’s not equipped for a months-long journey to Mars. If the Crew Dragon does make it to Mars, it’ll be attached to a larger habitat module that gives the crew privacy, exercise areas, a bathroom, and other essentials.

SpaceX has a concept for a larger ship–the Interplanetary Transport System, formerly known as the Mars Colonial Transporter–designed to carry either 100 humans or 100 tons of cargo to Mars (or beyond), but little is known about what the ship would look like or how it would operate. Launching this behemoth would require an even larger rocket than the Falcon Heavy.

2. How will the astronauts survive?

After leaving Earth’s orbit, future Mars explorers will be at the mercy of deep space radiation. Not only could these charged particles harm the crew, they might also degrade their food. So the spaceship will either need to radiation shielding (which adds weight and cost), or someone needs to come up with a sunblock that protects against radiation.

What will the astronauts live in when they get to Mars? Currently, Bigelow Aerospace‘s expandable habitats are a top contender. Compared to the aluminum structures typically used in space, Bigelow’s habitats are lighter and they travel in a compact state, inflating to full size at the destination site. A test demonstration of a Bigelow module on the International Space Station went well, but the company is not sure whether their designs will hold up on the gritty, radiation-bombarded red planet.

3. How would such a colony be sustained?

Every resupply mission to a colony on Mars would cost millions or billions of dollars. Who’s going to pay for that? And what will we get from Mars in return? Although the goal of ensuring humanity’s survival in the event of a cataclysm on Earth is nice, NASA’s budget is tight already, and businesses would need a financial incentive to pitch in. Perhaps space tourism will provide the solution.

The ultimate goal is to get a Mars colony to be self-sustaining. But that too will take a lot of time, effort, and money to set up.

Without a realistic long-term plan, the goal of colonizing Mars is in danger of going the way of the Apollo missions: spend a lot of money to put the first humans there, plant a flag, fly a few more missions until the public gets bored, then never return.

We know that NASA will provide communications and technical advice on SpaceX’s 2018 Red Dragon mission. What will the space agency’s role be in the company’s bigger plans? NASA originally planned to colonize deep space itself–will it be willing to take the co-pilot’s seat on Musk’s trip instead? It seems likely NASA will be onboard with Musk’s plans, but the division of labor, funding, and glory could be a touchy subject.

Space is hard, and Mars is even harder. Elon Musk has his work cut out, and we’re looking forward to learning more about how he plans to solve these problems during Tuesday’s talk, which starts at 2:30pm Eastern.

Correction, 9/26/2019: An earlier version of this article misstated the time of Musk’s Mars talk.