To prep for the one that will actually be on Mars, naturally. 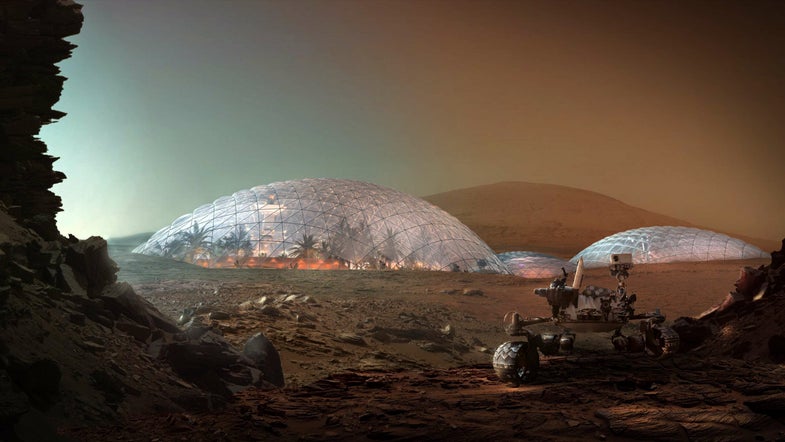 Before Mars, the UAE will build a city in a more familiar desert. UAE
SHARE

The government of the United Arab Emirates recently declared intentions to build a city on Mars in the next century or so. Their first step? A prototype city on Earth. This week officials launched the Mars Science City project, which will attempt to build “a viable and realistic model to simulate living on the surface of Mars.”

People on Earth pretend to be Martians all the time. Mars simulations in places like Hawaii and Utah have become so de rigor that IKEA recently sent their engineers for a short stay in one for, uh, reasons? But the UAE has grander plans in mind: their 1.9 million square foot city will provide a playground for engineers to prototype future Martian building materials and construction techniques, while simultaneously creating labs capable of simulating various aspects of the Red Planet’s environment.

The country hopes to attract “the best scientific minds from around the world,” according to a statement. There’s no word on whether the city will eventually have permanent inhabitants, but the UAE does plan to have a dedicated team live within a Mars simulation there for one year. They’ll work on developing the kind of self-sufficient processes that will keep astronauts healthy and well-fed during a true Mars mission. And as is always the case with research for longterm spaceflight, the lessons learned under those harsh conditions—limited access to water, intense heat and cold, isolation, and so on—could help develop useful farming and building strategies to implement right here on Earth.

UAE officials have yet to release a timeline for the project, but presumably it’s on a faster track than the 2117-ish deadline for the actual Martian settlement. Here are some peeks at the proposed design, created in collaboration with the architect Bjarke Ingels.

Figuring out how to feed folks on Mars is one of the biggest hurdles a potential settlement will have to clear before taking off. The Mars Science City project plans on practicing several methods of farming that are light on the resources Mars is lacking, like water and naturally nutritious soil. Waste and water recycling methods will also be put to the test to make the most of the system’s scant resources.

The city will be made of interconnected dome structures. The UAE plans on testing materials for the dome that can block solar radiation. That radiation is more potent on Mars than here on Earth, thanks to that planets lack of protective atmosphere.

It appears as though the domed city in the UAE will also have the ability to filter in more or less sunlight, perhaps in order to control conditions so that days there match Martian time. Renderings suggest that engineers plan to make inflatable domes out of transparent, recyclable plastics.

The UAE plans to have simulated Martian settlers spend a year living within the city’s confines. Various labs will support spaceflight research.

In addition to laboratories, the proposed city is also set to include a museum. It’s to be 3-D printed from local Emirati sand—roughly similar to the most abundant building material on Mars, to be sure.

The museum will honor “humanity’s greatest space achievements,” according to a statement.

The museum will include “educational areas meant to engage the youth with space, and inspire in them a passion for exploration and discovery.” You can’t put a settlement on Mars without a generation eager to settle there, after all.

The “city” will serve as a base of operations for scientists and engineers working on creating the real thing. This rendering shows a lobby with a prototype of the aspirational Mars settlement displayed in the center.

Recreation isn’t a frivolous aspect of space travel—it’s important that astronauts maintain good mental health, and that’s difficult so far from home. In addition to plans for an amphitheater that could presumably be used for recreation as well as education, press materials suggest a pool—one that fits into the grand water recycling scheme—is also in the works. Whether it makes sense to carry that particular element over to Mars is another question entirely.