Testing the limits of software. 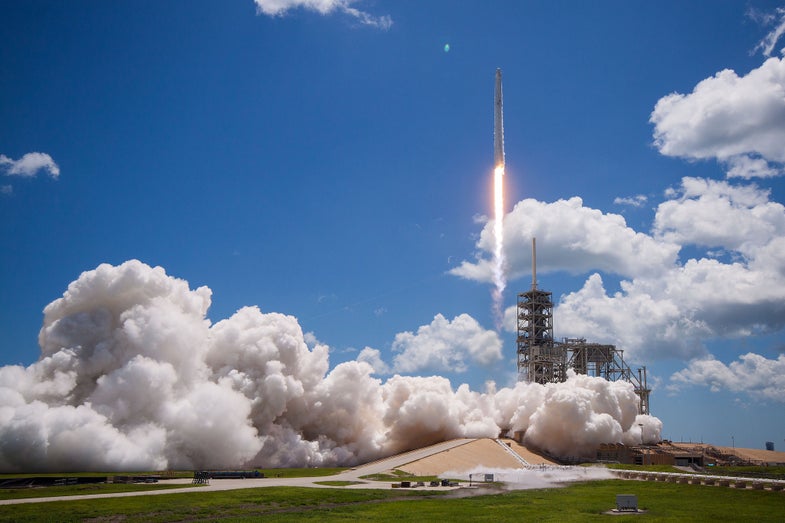 SpaceX's most recent launch lifted over 6,000 pounds of stuff destined for the ISS, including a supercomputer. SpaceX
SHARE

On Monday, at 12:31 p.m. Eastern time, a SpaceX Falcon 9 rocket lifted off on a resupply flight for the International Space Station, and among its cargo, in addition to ice cream, was something else very cool: a supercomputer.

The machine, made by Hewlett Packard Enterprise and called the Spaceborne Computer, is capable of a teraflop worth of computing power, which puts it roughly in line with a late-1990s supercomputer. Made up of two pizza box-shaped machines in a single enclosure, the HPE supercomputer is a part of a year-long experiment to see how an off-the-shelf computer system can fare in space if protected in the right way by software.

Long space missions like a trip to Mars come with considerable communications delays, so equipping astronauts with a powerful supercomputer would allow them to solve complex problems without having to wait for the issue and the solution to be transmitted to and from Earth. But radiation on a trip like that can damage computers, so NASA and HPE are conducting this research to see if software can provide the necessary protection to keep things functioning correctly.

Just like NASA’s famous identical twin experiment—in which Scott Kelly spent a year in space and his brother, Mark Kelly, stayed down on Earth—the supercomputer in space has a brother on this planet, a doppleganger machine located in Wisconsin acting as a control in this experiment.

HPE’s approach with the Spaceborne Computer, a two-node, water-cooled machine, is different from the way a mission-critical computer in space is physically protected (or “hardened,” in space gear speak) from radiation. For example, the chief computer for the Juno spacecraft inhabits a “protective titanium vault with walls about one centimeter thick,” according to BAE systems, which made that processor. Instead of physical protection for the HPE computer, the company is hoping to learn if software can do something similar.

Eng Lim Goh, the HPE project’s principal investigator, says that the “dramatic vision” for the future of this line of research is one in which before an astronaut travels to space, he or she would be able to take a top-of-the-line, off-the-shelf machine with them, and software could make it space-worthy. Then the astronaut could put whatever programs she wanted on the machine, a process that Goh, a computer scientist, compares to having an iPhone in space onto which you’ve preloaded your apps.

So how might this computer’s software help protect it?

In general, Goh says that smart machines on Earth that exercise “self-care” may turn themselves off in the face of dangerous conditions. Another idea is that a machine can intentionally run slowly so that it can handle errors as it goes, as opposed to running at maximum capacity and not having the bandwidth to also cope with problems.

“We will find out what works, what doesn’t,” Goh says. “We have a whole list.”

HPE said in a statement describing the project that the “system software will manage real time throttling of the computer systems based on current conditions and can mitigate environmentally induced errors.” (If you’re wondering what Hewlett Packard Enterprise is, it’s one-half of the old HP, which divided in 2015; the other half is now HP, Inc., which makes personal computers and printers.)

“This system is not planned to replace the [physically] hardened systems,” Goh says. The intention is that something like this could function as a “decision support” tool on a long mission to a place like Mars, and not a primary mission computer.

It’s due to arrive at the space station in the Dragon Spacecraft on Wednesday.

This article has been updated to correct errors with the spelling of Eng Lim Goh’s name.