This humble bombus is in danger of going extinct 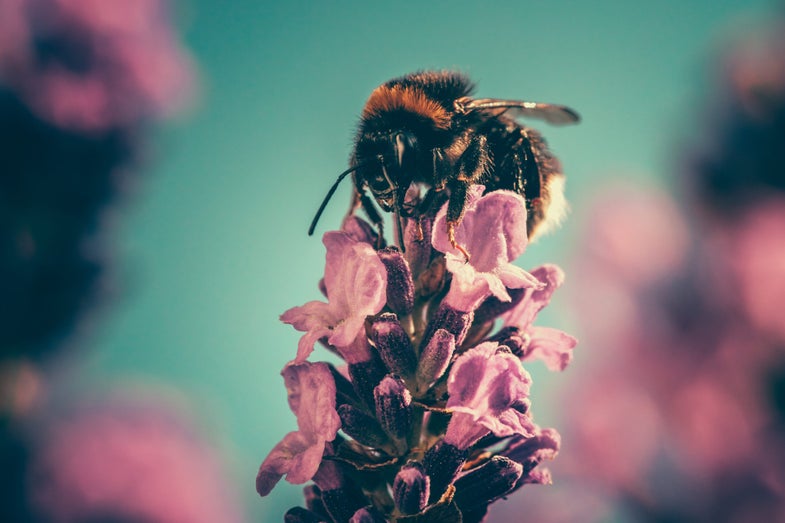 Its no news that bumble bees, or the “humble-bee,” as Charles Darwin first deemed them in Origins of the Species, are in danger. The U.S. Fish and Wildlife Service proposed putting the rusty-patched variety of these fuzzy buzzers on the endangered species list last month, after years of incredibly rapid population decline.

While this isn’t the Bengal tiger or black rhino–there are 250 species of bumble bees living in temperate zones of North, Central, and South America, as well as Europe and Asia–the rusty-patched bumble bee is a little more rare than most. In 2014, scientists were very excited to find the first Bombus affinis in five years in Virginia — and that was just a single bee. Still, some species of bumble bees are a familiar sight for most people who live outside of an urban area. They were abundant as late as 1990, declining by ninety-five percent in recent years.

Of the 250 species of bumble bees in the world, the decline of the rusty-patched is “significant because of its severity,” Sarina Jepsen, Director of Endangered Species and Aquatic Programs at the Xerces Society told Popular Science via email. The Xerces Society filed a petition in 2013 to list the rusty patched bumble bee as an endangered species under the US Endangered Species Act (ESA). “While it is not the only North American bumble bee that has undergone a dramatic decline, it represents one of the most well documented cases,” Jepsen says. “I think that the rusty patched bumble bee is representative of a larger trend.” Research conducted by Xerces Society conservation biologist Rich Hatfield, in collaboration with the IUCN Bumblebee Specialist Group, found that approximately one fourth of the nearly 50 species of North American bumble bees also face extinction risk.

If bumble bees disappear completely from this Earth, we’ll lose one of the world’s best pollinators. “Even if you can self-pollinate a crop, you get bigger plants and more fruit if bumble bees do the pollination,” Georgia Parham, spokesperson for the U.S. Fish and Wildlife Service told Popular Science. They’ve got the “buzz pollination” technique down: Grabbing part of the flower in their jaws and vibrating their wings to shake the pollen.

“A major reason bees and pollinators are in decline is urban development,” says Clint Perry, a cognitive neuroethologist at Queen Mary University who’s studying bee cognition. “With bumble bees, its not just the food they eat, but wildflowers and the whole ecosystem itself.” They pollinate blueberries, cranberries, and clover, and are almost the only insect pollinators of tomatoes, according to the USFWS. Native insects — mostly bees — are worth $3 billion per year in pollination services in the United States.

The good news is, you don’t need to quit your day job and become a beekeeper, or have a degree in melittology to help save the bees. Here’s what experts say are a few simple steps to take at home:

Start a flowering garden. Even if it’s a window box outside of your tiny city apartment, the bees will thank you. Urban development is one of the reasons they’re in this mess; Help put back some of what’s been paved over by planting your own small garden. They’re not picky about where they call home; Bumble bees are “habitat generalists,” says Jepsen. “These are not the species that we would expect would face a high degree of extinction risk, and yet many are.”

Plant native flower species. Pollinators like lupin, clover, bee balm, and asters attract bumble bees and are native to the U.S., Parham says. Choose a variety that bloom throughout the whole season, that’ll bloom early spring into fall, or plant a variety so that the garden is never not blooming. Bumble bees remember their home gardens, and will stay faithful to yours, so get to know your new bee buddies.

Use chemical pesticides and herbicides sparingly, or not at all. Even if you’re very careful with where you’re spraying that weed killer or pesticide, these can travel on the wind and harm bees far away.

Be nice to bumble bees when you see them. Don’t smash something just because you’re afraid of it. Bumblebees only sting if you’re hassling them or their nests. They’re smart — don’t squash ’em.

Report sightings in the wild. If you know your bombus affinis from your bombus terrestris, tell the FWS you’ve seen a rusty-patched bumblebee, here. You’ll need a photo of the bee, as well as some general information about location information.

Starting small and supporting conservation efforts could eventually give the bumble bees something to feel optimistic about.