Bumblebees are really good at picking up on cues from flowers, even electrical signals. 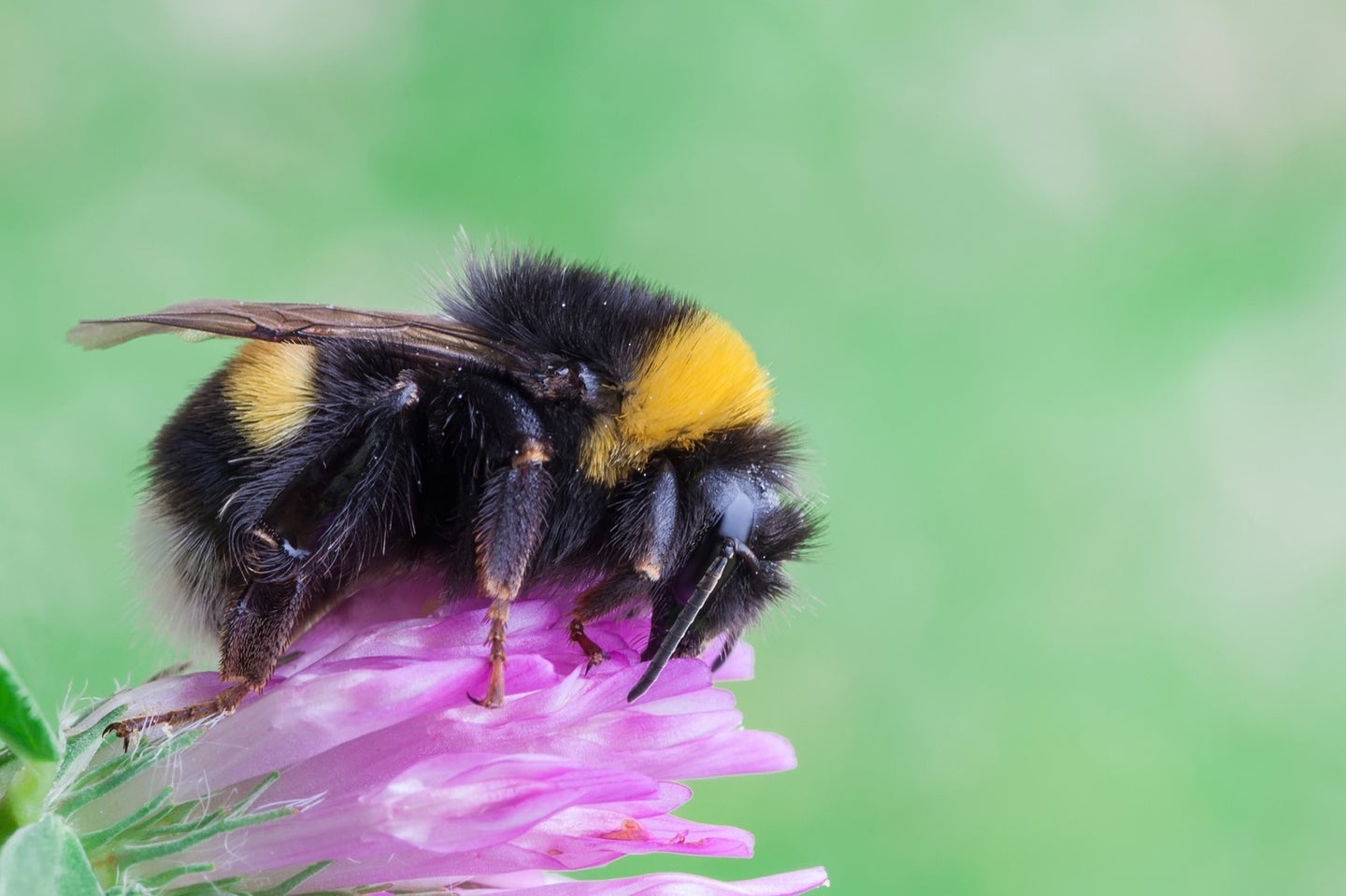 Pollinators, like this bumblebee (Bombus terrestris), can detect all kinds of sensory cues from flowers. Deposit Photos
SHARE

Bees are well-versed in the unspoken language of flowers. These buzzing pollinators are in tune with many features of flowering plants—the shape of the bulbs, the diversity of colors, and their alluring scents—which bees rely on to tell whether a reward of nectar and pollen is near. But bees can also detect signals that go beyond sight and smell. The tiny hairs covering their bodies, for instance, are ultra-sensitive to electric fields that help bees identify flowers. These electric fields can influence how bees forage—or, if those fields are artificially changed, even disrupt that behavior.

Today in the journal PNAS Nexus, biologists found that synthetic spray fertilizers can temporarily alter electric cues of flowers, a shift that causes bumblebees to land less frequently on plants. The team also tested a type of neonicotinoid pesticide—known to be toxic and detrimental to honeybee health—called imidacloprid, and detected changes to the electric field around flowers. Interestingly, the chemicals did not seem to impact vision and smell cues, hinting that this lesser-known signal is playing a greater role in communication.

“Everything has an electric field,” says Ellard Hunting, lead study author and sensory biophysicist at the University of Bristol. “If you are really small, small weak electric fields become very profound, especially if you have lots of hairs, like bees and insects.”

[Related: A swarm of honeybees can have the same electrical charge as a storm cloud]

Biologists are just beginning to understand how important electric signals are in the world of floral cues. To distinguish between more and less resource-rich flowers within a species, bees, for instance, can recognize specific visual patterns on petals, like spots on the surface, and remember them for future visits. Shape of the bloom also matters—larger, more open flowers might be an easier landing pad for less agile beetles, while narrow tube-shaped bulbs are hotspots for butterflies with long mouthparts that can reach nectar. Changes in humidity around a flower have also been found to influence hawkmoths, as newly opened flowers typically have higher humidity levels.

An electrical cue, though, is “a pretty recent thing that we found out about,” says Carla Essenberg, a biologist studying pollination ecology at Bates College in Maine who was not involved in the study. A 2016 study found that foraging bumblebees change a flower’s electric field for about 1 to 2 minutes. The study authors suggested that even this short change might be detectable by other passerby bees, informing them the flower was recently visited—and has less nectar and pollen to offer.

A flower’s natural electric field is largely created by its bioelectric potential—the flow of charge produced by or occurring within living organisms.  But electric fields are a dynamic phenomenon, explains Hunting. “Flowers typically have a negative potential and bees have a positive potential,” Hunting says. “Once bees approach, they can sense a field.” The wind, a bee’s landing, or other interactions will trigger immediate changes in a flower’s bioelectric potential and its surrounding field. Knowing this, Hunting had the idea to investigate any electric field changes caused by chemical applications, and if they deterred bee visits.

He first started out with pesticides because of the well-studied impacts they can have on insects. “But then I figured, fertilizer also has a charge, and they are also applied and it is way more relevant on a larger-scale,” he says. These chemical mixtures used in agriculture and gardens often contain various levels of nitrogen, phosphorus, and potassium. “Everyone uses [fertilizers], and they’re claimed to be non-toxic.”

First, to assess bumblebee foraging behavior, Hunting and his colleagues set up an experiment in a rural field site at the University of Bristol campus using two potted lavender plants. They sprayed a commercially available fertilizer mixture on one of the potted plants while spraying the other with demineralized water. Then, the team watched as bumblebees bypassed the fertilizer-covered lavender. Sprays that contained the pesticide or fertilizer changed the bioelectric potential of the flower for up to 25 minutes—much longer than shifts caused by wind or a bee landing.

But to confirm that the bees were avoiding the fertilizer because of a change in electric field—and not because of the chemical compounds or other factors—the researchers needed to recreate the electric shift in the flower, without actually spraying. In his soccer-pitch-sized backyard, a natural area free of other sources of electricity, Hunting manipulated the bioelectrical potential of lavender plants in order to mimic the change. He placed the stems in water, wired them with electrodes, and streamed a current with a DC powerbank battery. This created an electric field around the plant in the same way as the fertilizer.

He observed that while the bees approached the electrically manipulated flowers, they did not land on them. They also approached the flowers significantly less than the control flowers, Hunting says. “This shows that the electrics alone already elicit avoidance behavior.”

Hunting suggests that the plant’s defense mechanism might be at the root of the electrical change. “What actually happens if you apply chemicals to plant cells, it triggers a chemical stress response in the plant, similar to a wounding response,” he explains. The plant sends metabolites—which have ionic charge—to start to fix the tissue. This flux of ions generates an electric current, which the bees detect.

The researchers also noted that the chemicals didn’t seem to impact vision or smell, and that, interestingly, the plants sprayed with pesticide and fertilizers seemed to experience a shift in electric field again after it rained. This could indicate that the effect persists beyond just one spray. The new findings could have implications for casual gardeners and major agricultural industries, the researchers note.

“Ideally, you would apply fertilizer to the soil [instead of spraying directly on the plant],” Hunting says. But that would require more labor than the approach used by many in US agriculture, in which airplanes spray massive fields.

Essenberg says that luckily the electric field changes are relatively short lived, making it a bit easier for farmers to find workarounds. For instance, they could spray agricultural chemicals during the middle of the day, when pollinators forage less frequently because many flowers open in the morning and typically run out of pollen by then.

The toxicity of chemical sprays is probably a bigger influence “at the population level” on bee decline, Essenberg says. But this study offers a new idea: that change in electric potential might need to be taken into account for effectively spraying plants. “It raises questions about what other kinds of things might influence that potential,” she adds, such as contaminants in the air or pollution that falls with the rain.

Essenberg says it would be helpful to look at the impacts of electric field changes in more realistic foraging settings over longer periods of time. Hunting agrees. “Whether the phenomenon is really relevant in the long run, it might be, but we need to uncover more about this new mechanism.”