Watch A Bumblebee Tug A String To Get Lunch

New research shows how insect innovations can spread through a colony 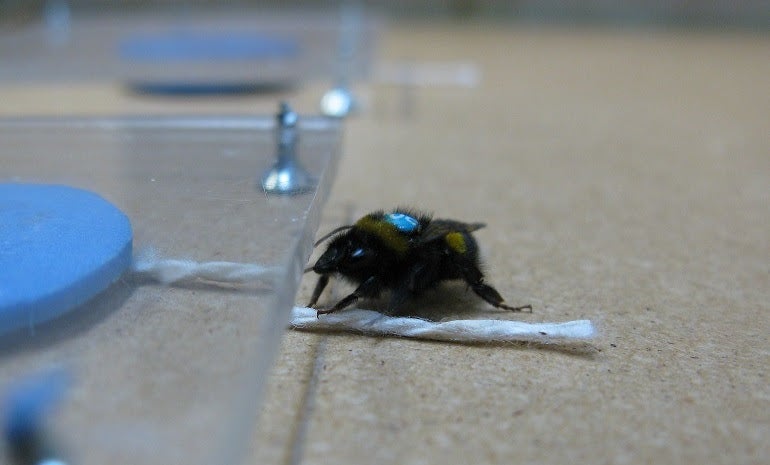 Bumblebees can be taught to yank a string to collect a sweet treat, scientists reported today in the journal PLOS Biology. Bees also picked up this “highly unnatural” way of foraging from watching each other.

Bees have cognitive abilities necessary for culture–they can learn and spread behaviors through a group. Studying how bugs learn from each other may offer insights about our own culture, the researchers suspect. “More sophisticated forms of social learning…specific to human culture may well have evolved from simpler forms of learning and cognition as described here,” they wrote.

The string-tugging puzzle the team used is often used to test cognitive abilities in vertebrates, partly because it’s not the type of behavior most animals would do on their own. Though bees drag debris and corpses from their nest, they don’t pull objects with the expectation of getting a snack.

Like other animals, though, the insects could be trained in this task. A few even figured it out on their own. You can watch one of the “experienced” bees earn her lunch in the video above. The blue disk is designed to mimic a flower, with a well of sugar water in the center. To slide the flower out from under a Plexiglas table, the worker bee must use her forelegs to grasp and yank the string.

Bumblebees could also learn the trick by observing their peers. Fifteen of 25 uninformed bees picked the skill up after watching another bee in action. And a single bee could introduce the string-pulling technique to a colony, with the skill continuing to spread even after that bee had died. “Once one bee knew how to string pull, over time, most of the foraging bees learned,” wrote the researchers. “Learning a non-natural task in bumblebees can spread culturally through populations.”

The team also gave the bees a longer, coiled string to tug. The bees failed to understand that pulling this string would eventually bring the flower within their grasp (an ability that’s been seen in wolves and long-tailed macaques). If the snack did not immediately move closer, the bees gave up.

Still, the bees’ triumphs demonstrate how an innovation can spread among animals that lack “the high cognitive sophistication” of people.

“The capacity of culture may be within most animals with a relatively basic toolkit of learning processes,” concluded the researchers.