As Its Ice Sheet Melts, Greenland Is Rising Faster Than Expected

We may have been underestimating sea level rise If the Earth’s crust had a theme song, it would probably be Chumbawamba’s ’90’s classic “Tubthumping”.

Allow me to explain.

In a paper published today in Science Advances, researchers led by Shfaqat A. Khan from the Technical University of Denmark found that we might have been underestimating Greenland’s ability to bounce back after thousands of years of glacial oppression, which is very bad news for estimates of sea level rise.

So first some background: the Earth’s interior has a mostly solid core at the center, a mantle that is made up of flexible heated rock and a very very thin layer (five to 30 miles thick) of solid rock at the edges of the planet. That crusty outer layer is called the Earth’s crust. During cold periods in the Earth’s history, ice starts building up on land. In large amounts, this ice becomes glaciers and ice sheets, building up into vast masses thousands of feet thick. Greenland and Antarctica have the last two significant ice sheets on Earth. With that much of a load on top of it, the crust sinks into the mantle. But when the ice melts away or gets thinner during warmer periods, the crust starts to bounce back, a process called postglacial rebound.

In other words, it gets pressed down, but it gets up again, and we’re never going to keep it down.

New GPS measurements reported in the paper found that in some areas (where the mantle might be a little springier), Greenland’s underlying land mass was rising by nearly half an inch (12 mm) every year as ice is removed. That’s a big deal because many measurements of the thickness of the Greenland Ice Sheet are based on researchers measuring the elevation of the surface of the ice. The reasoning is if the ice is taller than it was last time measurements were taken, then the ice sheet is growing. If it’s shorter, than the ice sheet is shrinking. And by taking many different measurements across Greenland, researchers can build up a picture of how much ice is being lost over time. These calculations do take postglacial rebound into account, but the new research suggests that Greenland is bouncing back faster then previous studies had accounted for.

That means that Greenland may have lost much more ice than we’d thought. The study suggests that instead of Greenland’s melting ice contributing 10.5 feet (3.2 m) to sea level rise over the past 20,000 years, the Greenland Ice Sheet has contributed around 15.1 feet (4.6 m) to sea level rise. (To put those 20,000 years in perspective see this xkcd comic for a visual of how climate has changed since then.)

Greenland is still a very icy place, and contains a lot of ice that could raise sea levels much further if they continue to melt at an accelerated rate. Researchers hope that with these new, more accurate measurements they can get a more accurate picture of how Greenland is contributing to sea level rise, helping people living in coastal cities prepare for a wetter future. 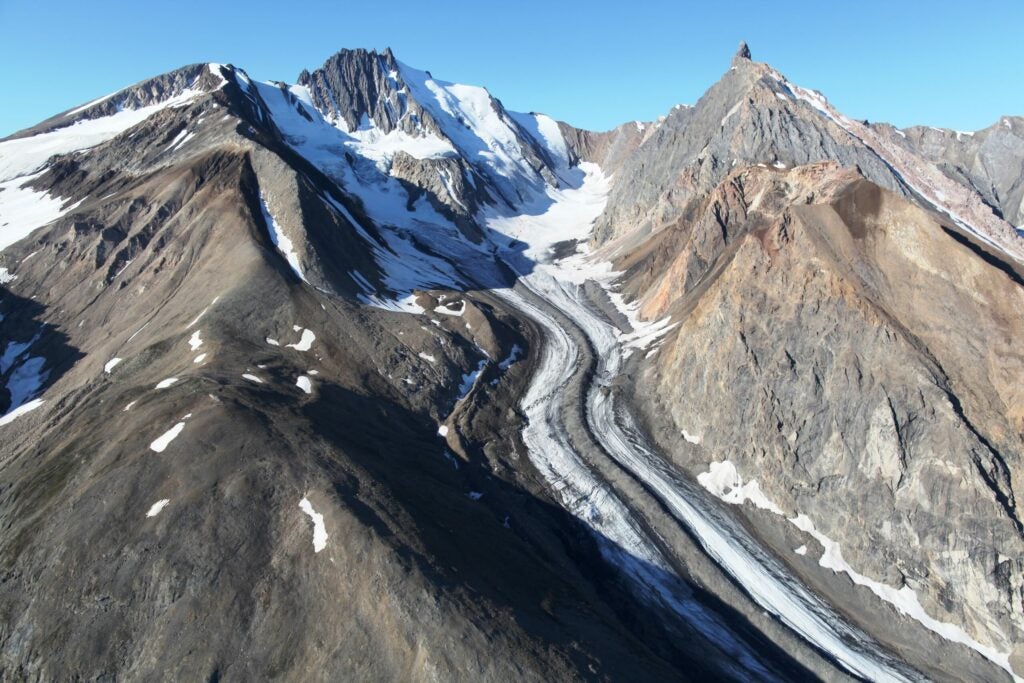 A glacier makes its way down a mountain in Greenland. 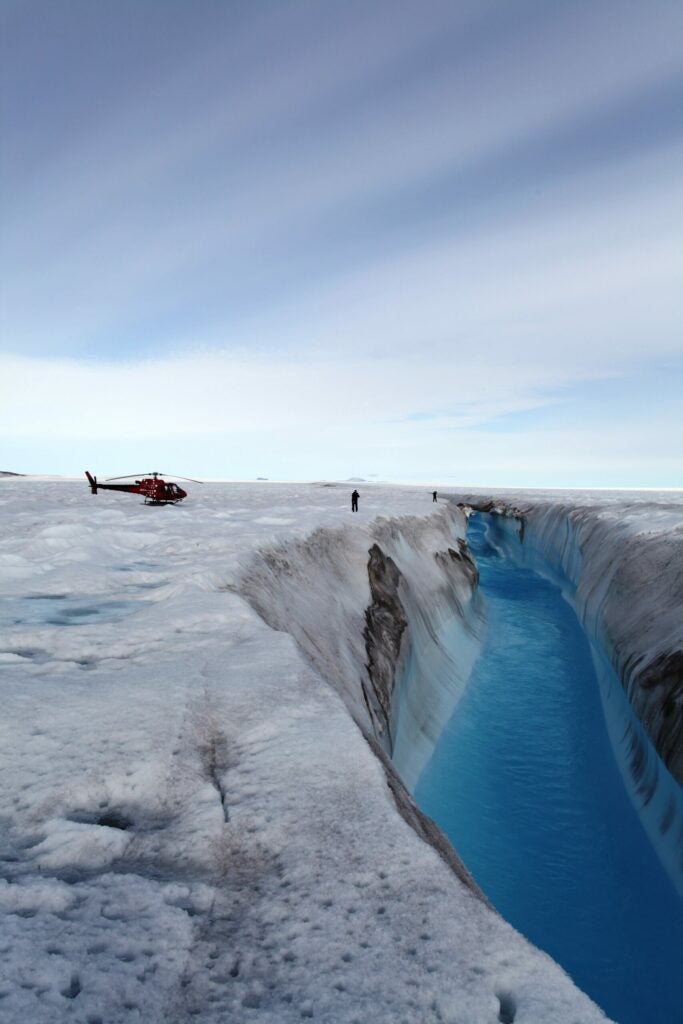 A helicopter and researchers help provide a much needed size perspective on the massive sheet of ice. 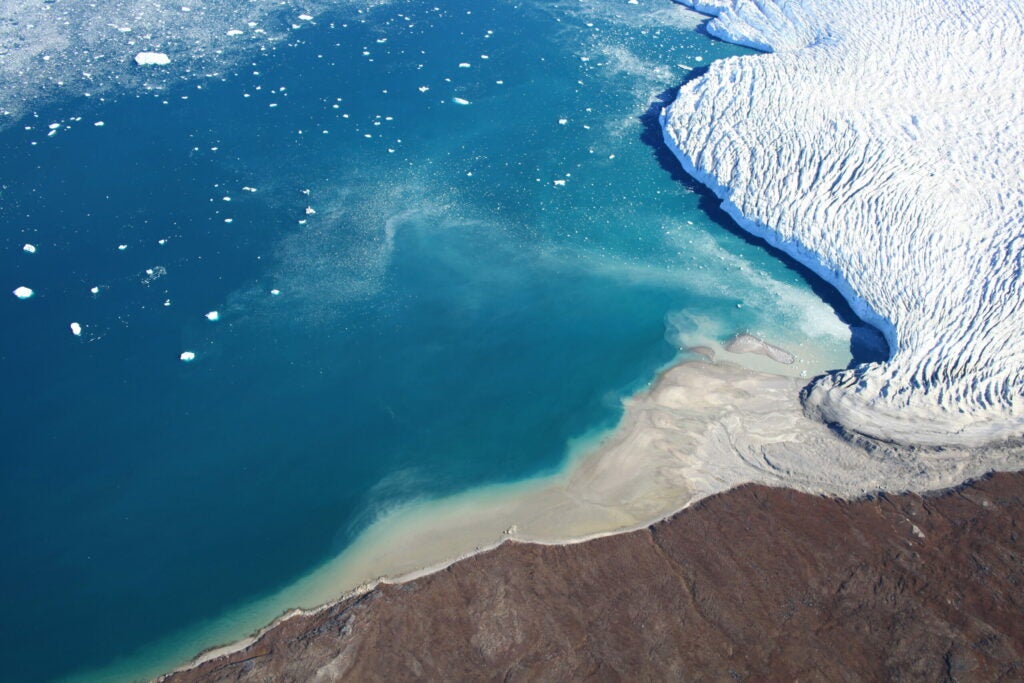 The Sarqardliup glacier in west Greenland where it flows into the sea. 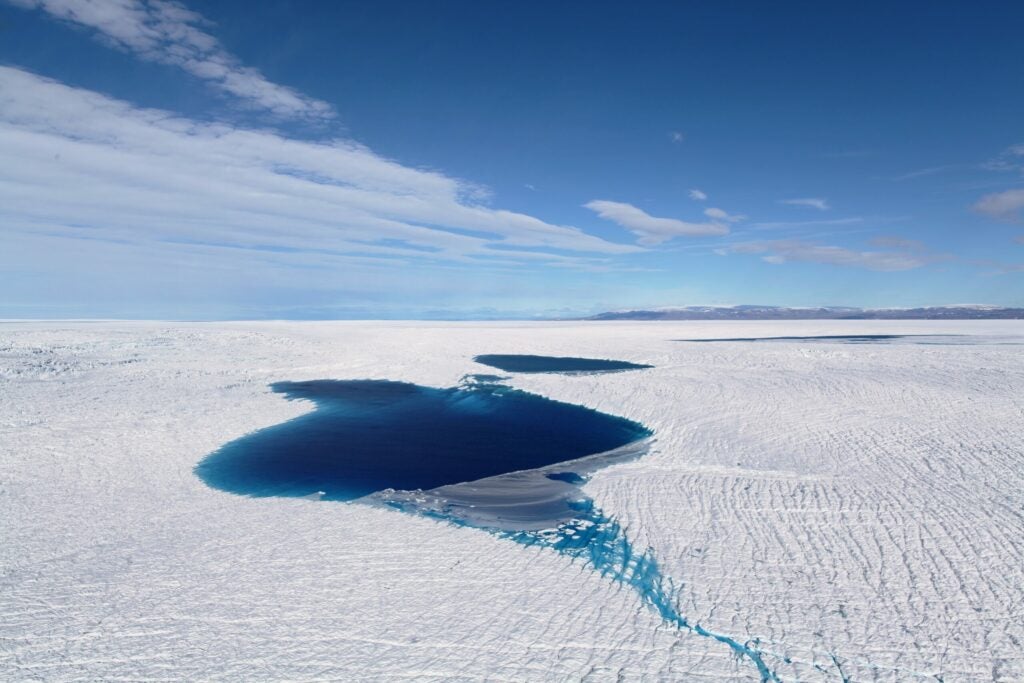 A supraglacial lake is a lake that sits on top of a glacier. Though massive, cracks that form under the surface can drain them in a matter of hours. 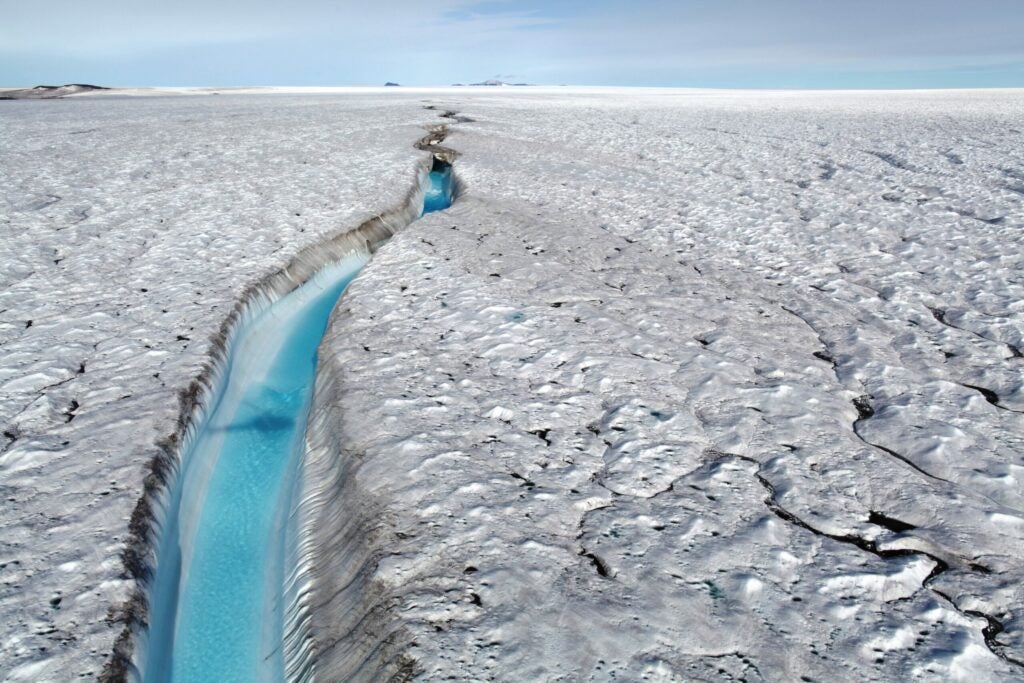 Meltwater flowing into the oceans from the Greenland Ice Sheet can contribute to sea level rise.