Sweet bees are made of these 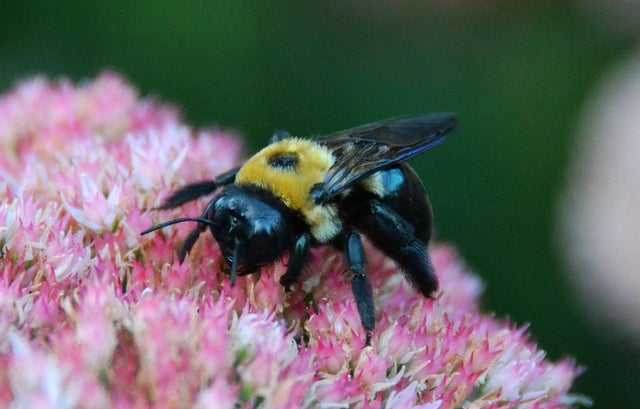 Publishing their work in Science this week, researchers found that bumblebees could experience something like a sugar rush of optimism. “We can’t say they experience life in the same way that we do,” Clint J. Perry, cognitive neuroethologist at Queen Mary University, told Popular Science. “But on a basic level, there’s no reason to believe they can’t feel something. It does feel like something to be a bee or an ant or what-have-you.”

Perry, along with researchers Luigi Baciadonna and Lars Chittka, sought to find out if bees could “feel” positive emotions. To do this, they first taught the bees that blue entrances held lightly sweetened water and green held boring, plain water, and recorded how long it took the bees to enter a door. The researchers then gave half of the bees a more concentrated taste of sugar water, and presented them with a new color: ambiguous blue-green. Bees can differentiate between blues, greens, and what’s in between pretty well, so this new color was meant to be confusing and mysterious.

The sweet bees were quicker to “optimistically” fly into this strange new door and find out if more sugar waited inside. They weren’t flying faster thanks to the buzz — they measured speed and found no difference between the two groups — but they were making a judgement call more quickly and acting on it. Bumblebees exhibit “emotion–like states” that change their behavior. And because they were able to nix the bees’ good vibes with a topical dose of the dopamine-killer fluphenazine, and return to the original results, they could conclude that the sugar was giving them a high similar to how we’d feel good wrist-deep in a pint of Ben & Jerry’s.

Some days, it feels like a crab spider has sprung out from the dark side of your thistle blossom and squeezed you, until setting you free. At least, if you’re a bumblebee, you’ve had those days — and afterward, a sugary snack helps them bounce back. It’s not far from how humans might grab a pint of ice cream to deal with a rough day.

After experiencing a simulated attack, the bees on a sugar-high flew to a feeder four times faster than the sugar-free bees. They were able to recover from the trauma if they were full of a feel-good treat.

Although these experiments show that bees are doing a lot of cognitive work in the brain the size of a sesame seed, the researchers are careful with their terminology around what emotions, feelings, and free will mean when it comes to insects. It’s hard to say definitively that a bug’s life has the capacity for joy or fear — but they do fulfill the same criteria that’s used to study expression in infants and nonverbal mammals. “That feeling inside is what’s so close to us and makes emotion present in our lives? Emotions are a lot more than that,” Perry says. Whether insects tremble in terror when you’re about to smack them is still unknown, but this study and those like it opens potential for more research.

“We’re understanding that insects aren’t these behaviorally rigid machines,” Perry says. “They’re much more complex than we have often thought.”