The effects spell peril for the entire food web. 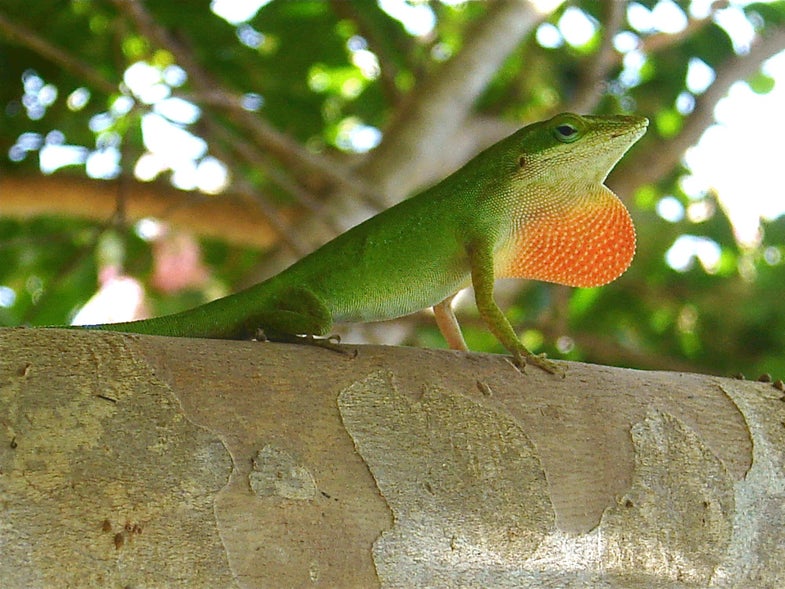 The world is getting warmer, but insect populations are not doing so hot. Plenty of studies have shown how certain bugs like bees and fireflies have hemorrhaged numbers over the last several decades. But until now, very few have tracked these trends across all species. As it turns out, things are stupendously worse than we previously thought, and the culprit is—spoiler alert—climate change.

New findings published Monday in the Proceedings of the National Academy of Sciences illustrate how insect and other arthropod populations in the rain forests of Puerto Rico have declined 60-fold over the last four decades; this time span saw a 2 degree Celsius rise in average temperatures. Moreover, the effects are already cascading into losses for the animals that prey on these bugs for food, threatening to crash the intricate food web that sustains and stabilizes the rainforest ecosystem.

“We are not seeing any studies that show that insect groups are doing particularly well,” says Scott Black, the Executive Director for the Xerces Society for Invertebrate Conservation. “This is just the latest study in a long line that show loss and decline of invertebrates at the population level, species level, and loss of invertebrate biomass generally.” Black is not particularly surprised by the new findings, except in how severe the results describe that loss, and that’s part of what makes this latest study so uncomfortable to swallow.

Lead study author Bradford Lister, a biologist at Rensselaer Polytechnic Institute in New York, has been studying the region’s insect populations for nearly forty years, focusing on the El Yunque national forest, located in northeastern Puerto Rico on the slopes of the Luquillo mountains, and the only tropical rain forest within the U.S. National Forest System. When he began in the 1970s, Lister was measuring and tallying estimates of the forest’s insect populations as well as their predators, including birds, lizards, and frogs.

Four decades later, he came back to take measurements of the insects once again, as well as other arthropod species like spiders and centipedes. He and his team used sticky traps as well nets to collect arthropods en masse and quantify the biomass (dry weight of lifeforms) of these species in El Yunque.

What they found was that the arthropod numbers had plummeted between 1976 and 2013. The trap rate in the sticky traps had fallen by 60 times, while the net sweeps only captured between 25 and 12.5 percent of previous hauls. The 10 most common species living in the forest canopy all experienced detrimental losses.

That’s not even the worst news. Lister and his colleague also trapped anole lizards, a natural predator of arthropods, and found the average density of those animals were cut by more than half. Some anole species had vanished entirely from the forest. An analysis of previously unpublished findings showed bird captures had fallen by 50 percent between 1990 and 2005—the iconic, green Puerto Rican tody in particular declined by about 90 percent.

It’s easy to blame climate change, but that charge is not without just cause. The United Nations’ Intergovernmental Panel on Climate Change recently outlined how devastating a temperature rise of just 2 degrees could be on global habitats for humans and animals alike. Species living in tropical climates are accustomed to a very specific type of weather condition, and even minor shifts can change internal biochemistry in ways that foster a slow doom for these species, and the other plants and animals that depend on them.

Although the study is limited to just the ecology of the Luquillo forests, its findings follow similar trends found in other parts of the world, including a study published last year that found a 76 percent drop off in insect biomass in Germany between 1989 and 2016. Although that study suggests pesticide could have also contributed to this demise, the PNAS study points out that Puerto Rico’s use of pesticide since 1969 has dropped by more than 80 percent. The evidence seems to overwhelmingly point to climate change as the primary driver of insect loss.

“From my reading of the study, it is robust in its findings,” says Black, who was not involved with the study. “The vast majority of studies are showing insects and other invertebrates declining, so taken in total, that minimizes the geographic limitation of any one study.”

The consequences of insect loss extend well into human activity itself as well. “If you like to eat salmon, you can thank small flies that live in the streams where those salmon are born,” he says. “If you like birds you can thank insects—the majority of birds feed on insects at least as young. And if you like to eat a healthy, plant-based diet you can thank a pollinator for your fruits, vegetables, and nuts. Insects and other invertebrates are vital for pollination, waste management, and food for many other animals.”

The situation is dire, but not hopeless. A few real options exist that can help remediate the situation. For starters, limiting our greenhouse gas emissions would significantly mitigate global temperature increases moving forward. The best news is there is, incredibly, still time for us to act.