Bees deal with darkness the same way humans do

It just took an eclipse, some microphones, and a bunch of schoolchildren to prove it. 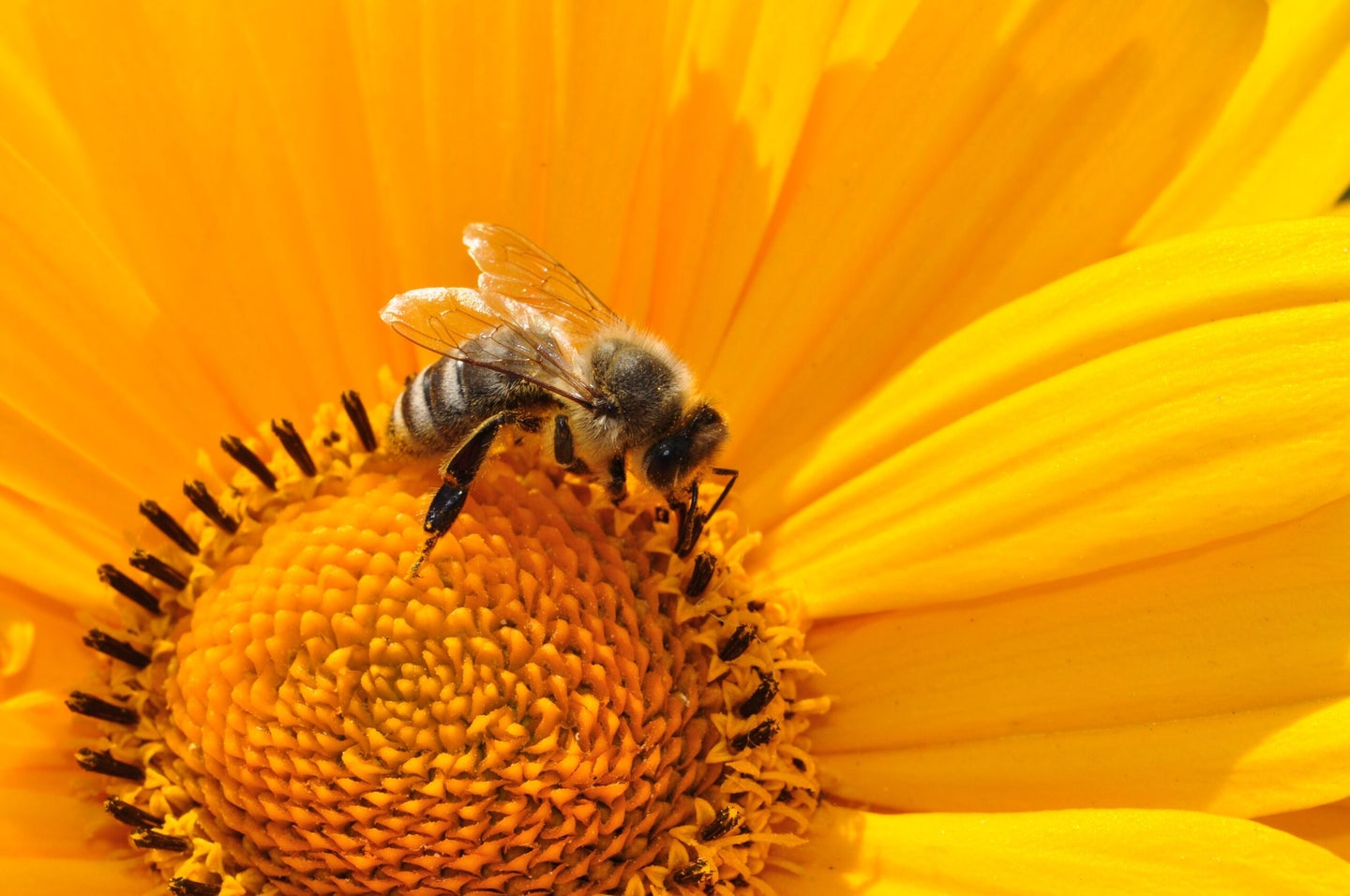 When bees can't see well enough to buzz their way to another flower, they slow down, and eventually stop. Pixabay
SHARE

Even the industrious honey bee rests when the sun goes down, and that goes for other solar disappearances as well.

Plenty of anecdotes support the notion that solar eclipses can trick animals into performing their nighttime routines, but evidence in the scientific literature has been sparse. Eclipse science moves in fits and starts, in part because the chance to study them comes so rarely. Astronomers who plan their lives around being in the right place at the right time can catch dozens, but biologists with other research priorities might consider themselves lucky to witness one or two.

When that once-in-a-lifetime opportunity came for American scientists in August 2017, researchers were prepared. The last time the moon’s shadow touched U.S. soil, Sony was five months out from releasing the Walkman cassette player. This time, a team of entomologists at the University of Missouri took full advantage of more modern technology, delivering USB microphones to groups of volunteer citizen scientists from Oregon to Missouri, half of which were elementary school classrooms. After crunching the data, they confirmed that honeybees and bumblebees, like humans, have a hard time getting around during the darkness of an eclipse and prefer to hunker down until the light returns—something earlier reports had hinted at but not conclusively demonstrated.

Previous research had shown that bumblebees drop to the ground during darkness in laboratory settings, but the only natural observations were those collected during a 1932 solar eclipse. “The only note of bumblebees that was recorded was this single anecdote from a person that said a bumblebee landed on their arm and crawled into their sleeve during totality,” says Zach Miller, a co-author. Study leader Candace Galen realized during a conversation with a colleague that the 2017 crossing would provide another opportunity to test whether bees would stop flying when the sun disappeared.

To fill in the gap in the literature in a more rigorous way, Galen and Miller recruited classrooms in Missouri and volunteer groups in Oregon, Utah, Wyoming, and Idaho to help them test out a new technology their lab had been developing to detect bees by their buzz out in the wild. They distributed USB-powered microphones to 16 sites in the path of the eclipse, and had their army of volunteers eavesdrop on the pollinators. The technology can’t yet tell species apart based purely on buzz, but local observations suggested that most of the insects were honeybees or bumblebees.

The results, which the schoolchildren helped analyze, showed that bees do in fact shut down in the darkness of the totality. Only one of the dozens of microphones picked up a single buzz. Miller says they expected this behavior since North American bees can’t get much done when they can’t see, although he pointed out that some South American bee species can see pretty well in the dark, and speculated that they may pollinate straight through eclipses.

The study also answered questions about bee flexibility, behaviorally speaking. When the light levels are low just before and just after totality, the buzzes got a bit longer. Extended buzzes represent slower flying speeds, Miller says, since it takes the bees longer to get where they’re going. This change in flight shows that bees have some degree of control over their actions that isn’t purely determined by their genes, and can respond to the twilight conditions by slowing down. Biologists call this phenomenon “behavioral plasticity,” meaning the ability to change behavior in response to external conditions. Humans, for instance, display a similar plasticity when they drive more slowly in the fog or snow, Miller says. “You’re going to slow down so you can pick up on all the environmental cues so you don’t get into an accident.”

While astronomers kept busy taking measurements of the corona and mapping craters on the moon, Galen and Miller weren’t the only researchers thinking about what was happening on the ground. A number of other University of Missouri professors carried out their own observations of fish, birds, and bats. MU botanists are currently preparing a paper describing how plants weathered the loss of light as well.

For Galen’s lab, the eclipse was just a trial run for their buzz-recording setup. The group is developing the microphone-software package as an alternative to traditional tools for figuring out what species of bees, and how many, are flying where. Other methods are often more destructive, such as the poison-first-and-ask-questions later approach known as “sugar trapping,” in which scientists catch bees with fatal mixtures of sugar and detergent. They hope future versions of the microphone system will let them tell bee species apart and track them. That information could help researchers address questions of climate change, such as when certain flowers bloom year-to-year, by looking at where and when individual types of bees are buzzing during each season.

“This technology is certainly still in its nascent stages,” says Miller. “But we’re starting to be able to answer certain questions about the plant-pollinator relationship just using sound alone.”.