Migrating monarchs are in trouble. Here’s how we can all help them.

A new conservation plan weighs the burden and interests of landowners, biologists, and butterfly enthusiasts alike. 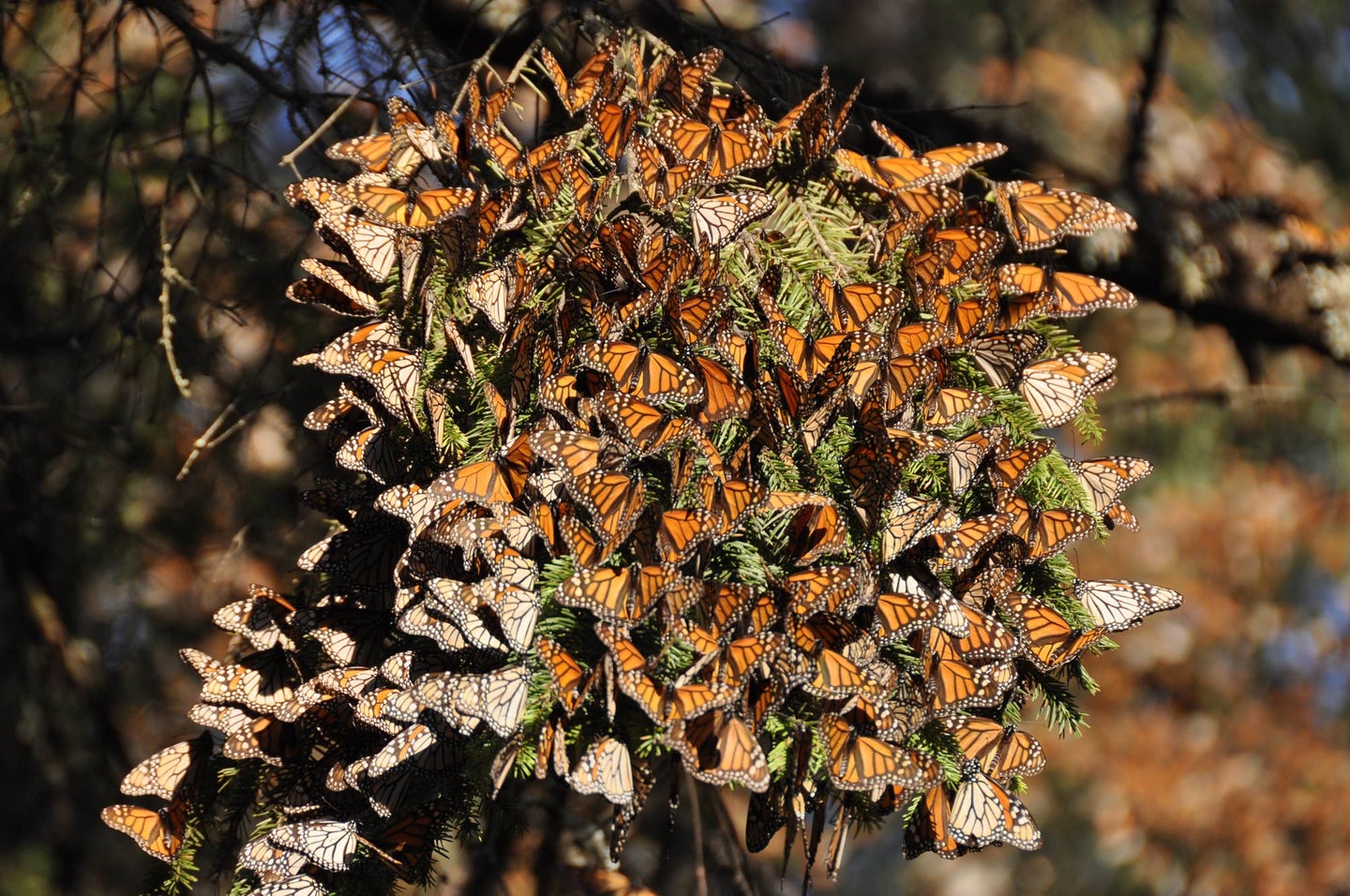 D. André Green II is an assistant professor of Ecology and Evolutionary Biology at the University of Michigan. This story originally featured on The Conversation.

One of nature’s epic events is underway: Monarch butterflies’ fall migration. Departing from all across the US and Canada, the butterflies travel up to 2,500 miles to cluster at the same locations in Mexico or along the Pacific Coast where their great-grandparents spent the previous winter.

Human activities have an outsized impact on monarchs’ ability to migrate yearly to these specific sites. Development, agriculture and logging have reduced monarch habitat. Climate change, drought and pesticide use also reduce the number of butterflies that complete the journey.

Since 1993, the area of forest covered by Eastern monarchs at their overwintering sites in Mexico has fallen from a peak of 45 acres in 1996-1997 to as low as 1.66 acres in the winter of 2013-2014. A 2016 study warned that monarchs were dangerously close to a predicted “point of no return.” The 2019 count of monarchs in California was the lowest ever recorded for that group.

What was largely a bottom-up, citizen-powered effort to save the struggling monarch butterfly migration has shifted toward a top-down conversation between the federal government, private industry and large-tract landowners. As a biologist studying monarchs to understand the molecular and genetic aspects of migration, I believe this experiment has high stakes for monarchs and other imperiled species.

Millions of people care about monarchs

I will never forget the sights and sounds the first time I visited monarchs’ overwintering sites in Mexico. Our guide pointed in the distance to what looked like hanging branches covered with dead leaves. But then I saw the leaves flash orange every so often, revealing what were actually thousands of tightly packed butterflies. The monarchs made their most striking sounds in the sun, when they burst from the trees in massive fluttering plumes or landed on the ground in the tussle of mating.

Decades of educational outreach by teachers, researchers and hobbyists has cultivated a generation of monarch admirers who want to help preserve this phenomenon. This global network has helped restore not only monarchs’ summer breeding habitat by planting milkweed, but also general pollinator habitat by planting nectaring flowers across North America.

Scientists have calculated that restoring the monarch population to a stable level of about 120 million butterflies will require planting 1.6 billion new milkweed stems. And they need them fast. This is too large a target to achieve through grassroots efforts alone. A new plan, announced in the spring of 2020, is designed to help fill the gap.

Pros and cons of regulation

The top-down strategy for saving monarchs gained energy in 2014, when the U.S. Fish and Wildlife Service proposed listing them as threatened under the Endangered Species Act. A decision is expected in December 2020.

Listing a species as endangered or threatened triggers restrictions on “taking” (hunting, collecting or killing), transporting or selling it, and on activities that negatively affect its habitat. Listing monarchs would impose restrictions on landowners in areas where monarchs are found, over vast swaths of land in the US.

In my opinion, this is not a reason to avoid a listing. However, a “threatened” listing might inadvertently threaten one of the best conservation tools that we have: public education.

It would severely restrict common practices, such as rearing monarchs in classrooms and back yards, as well as scientific research. Anyone who wants to take monarchs and milkweed for these purposes would have to apply for special permits. But these efforts have had a multi-generational educational impact, and they should be protected. Few public campaigns have been more successful at raising awareness of conservation issues.

To preempt the need for this kind of regulation, the U.S. Fish and Wildlife Service approved a Nationwide Candidate Conservation Agreement for Monarch Butterflies. Under this plan, “rights-of-way” landowners—energy and transportation companies and private owners—commit to restoring and creating millions of acres of pollinator habitat that have been decimated by land development and herbicide use in the past half-century.

The agreement was spearheaded by the Rights-of-Way Habitat Working Group, a collaboration between the University of Illinois Chicago’s Energy Resources Center, the Fish and Wildlife Service, and over 40 organizations from the energy and transportation sectors. These sectors control “rights-of-way” corridors such as lands near power lines, oil pipelines, railroad tracks and interstates, all valuable to monarch habitat restoration.

Under the plan, partners voluntarily agree to commit a percentage of their land to host protected monarch habitat. In exchange, general operations on their land that might directly harm monarchs or destroy milkweed will not be subject to the enhanced regulation of the Endangered Species Act—protection that would last for 25 years if monarchs are listed as threatened. The agreement is expected to create up to 2.3 million acres of new protected habitat, which ideally would avoid the need for a “threatened” listing.

Many questions remain. Scientists are still learning about factors that cause monarch population decline, so it is likely that land management goals will need to change over the course of the agreement, and partner organizations will have to adjust to those changes.

Oversight of the plan will fall primarily to the University of Illinois, and ultimately to the U.S. Fish & Wildlife Service. But it’s not clear whether they will have the resources they need. And without effective oversight, the plan could allow parties to carry out destructive land management practices that would otherwise be barred under an Endangered Species Act listing.

A model for collaboration

This agreement could be one of the few specific interventions that is big enough to allow researchers to quantify its impact on the size of the monarch population. Even if the agreement produces only 20 percent of its 2.3 million acre goal, this would still yield nearly half a million acres of new protected habitat. This would provide a powerful test of the role of declining breeding and nectaring habitat compared to other challenges to monarchs, such as climate change or pollution.

Scientists hope that data from this agreement will be made publicly available, like projects in the Monarch Conservation Database, which has tracked smaller on-the-ground conservation efforts since 2014. With this information we can continue to develop powerful new models with better accuracy for determining how different habitat factors, such as the number of milkweed stems or nectaring flowers on a landscape scale, affect the monarch population.

North America’s monarch butterfly migration is one of the most awe-inspiring feats in the natural world. If this rescue plan succeeds, it could become a model for bridging different interests to achieve a common conservation goal.