Lockheed Martin will build the vehicle, which should only be about 10 feet tall. Eventually, NASA wants to literally throw it into the Martian atmosphere. 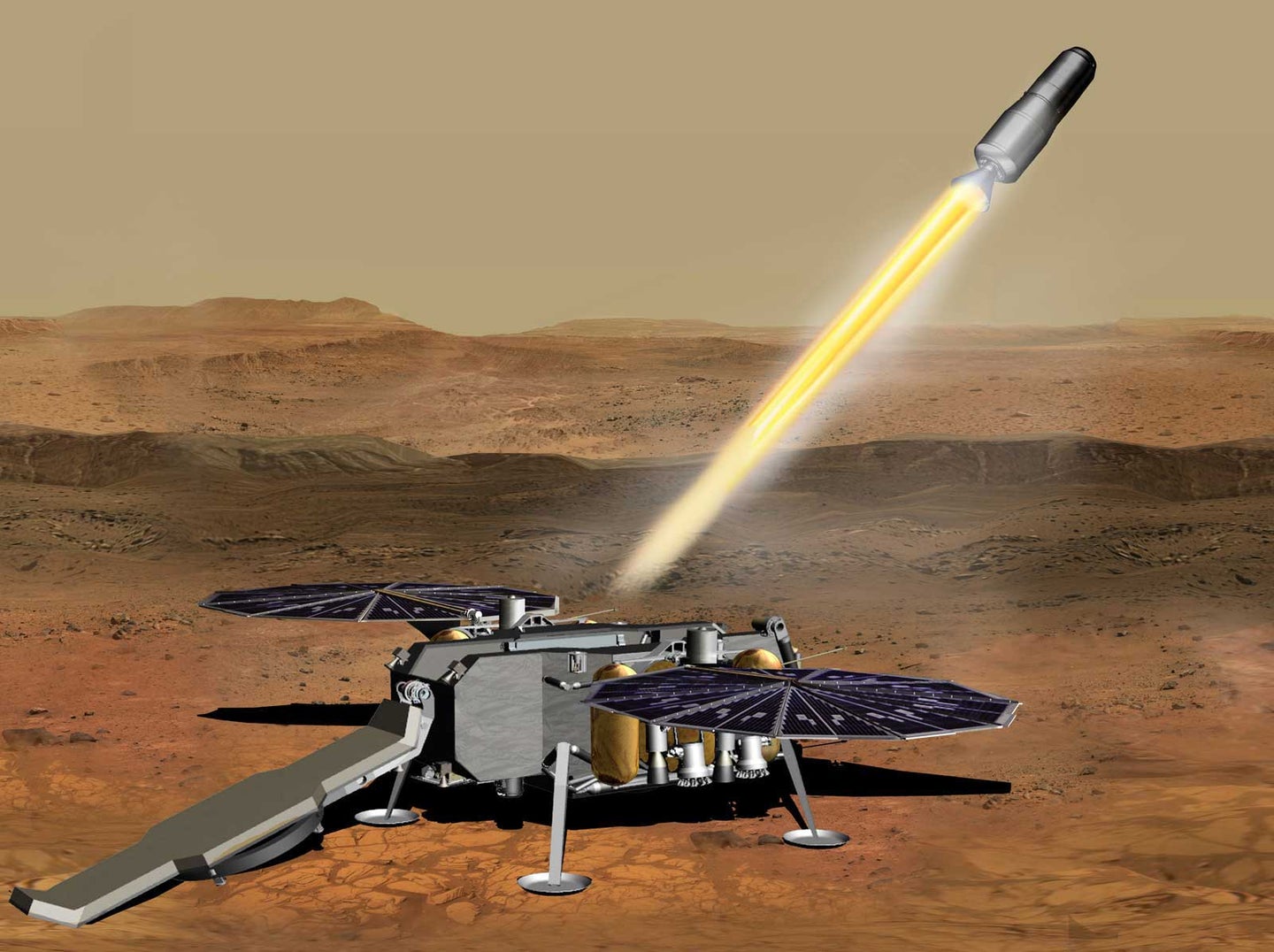 A conceptual rendering of the Mars Ascent Vehicle. NASA/JPL-Caltech
SHARE

The Perseverance rover has been exploring Mars for a year now, scoping out the planet and picking up pieces that might reveal whether life is, or was, ever there. While rovers have explored Mars before, the bits that Perseverance has been collecting would be the first samples of another planet brought back to Earth. If all goes well, pieces of Mars could be back on Earth by 2033.

Getting a rover to Mars is one thing—but bringing samples of it back to Earth represents a new challenge altogether. A return mission will require multiple complex pieces working together to ferry the precious cargo back to Earth.

Earlier this month, NASA announced that defense contractor Lockheed Martin would be building the Mars Ascent Vehicle (MAV), the rocket that will someday take off from the surface of Mars to start the return journey with samples of the planet’s dirt, rocks, and atmosphere.

What is the MAV?

The MAV will be a small rocket designed to get from the surface of Mars up into the planet’s orbit. In some ways, it will be just like any other rocket, explains Philip Franklin, NASA’s chief engineer on MAV. It will run on solid propellant, just like other rockets that take off from Earth.

NASA has already made most of the major design decisions, like the size and shape of the spacecraft and how it will be powered. Think of NASA as like the architect on the MAV project. The blueprints are basically done, says Dave Murrow, Lockheed Martin’s deep space exploration business development lead. Now, Lockheed Martin will take what NASA has planned to build the rocket, refining the design as needed to make sure everything works as intended, Murrow says. His team will work out details like how much the steering nozzle will be able to move around to efficiently steer the rocket, he says.

Of course, the rocket has to get to Mars before it can take off from there. NASA will launch the MAV inside a larger spacecraft, which should take off from Earth around 2028. Since it’s being carried to Mars, the team is paying extra attention to keeping the vehicle small and light. “Mass is king,” Franklin says. The MAV will be somewhat diminutive. It will measure in at around 10 feet tall, and will weigh just under half a ton—so it’ll be shorter than a basketball hoop and weigh about the same as a grand piano, says NASA’s MAV project manager Angie Jackman.

The rocket will have a compartment in the top for samples, as well as two engines that will power it up into orbit. The contract with Lockheed Martin could total up to $194 million.

How does the rocket get to Mars – and back?

The MAV will be launched inside a bigger spacecraft from Earth and carried to the surface of Mars by NASA’s Sample Retrieval Lander.

After the lander navigates to a location in or near the Jezero crater, the lander and rocket will remain on Mars until it’s time to bring samples back. The MAV will be contained in a protective shell, which the engineers sometimes refer to as the igloo, Murrow says. The igloo helps keep the equipment warm in the harsh Martian conditions—even though the mission is timed for the relatively balmy Martian spring, temperatures will likely dip below -90F.

Already, the Perseverance rover has been collecting samples of the Martian dirt (called regolith), as well as vials of the atmosphere. So far, it has collected seven samples, but by the time the mission is complete, there should be about 30 samples set to return to Earth, each in a small test tube-like container that’s about eight inches long and half an inch wide. Once all the samples have been collected, a fetch rover will pick them up and bring them to where MAV is on its lander. Then, a robotic arm will load the samples into the top of the MAV into a special compartment about the size of a basketball.

The rocket will remain horizontal during its stay on Mars, laying flat on the lander. In order to get the rocket into the air, the lander will loft it—basically, tossing it up into the air. Because the front will be tossed a bit harder than the back, the rocket should wind up pointing at an angle, towards the Martian sky. Then, in midair, the solid propellant will ignite, and the rocket will take off. The process sounds chaotic, but all the mechanics of the deployment mechanism are carefully calibrated to Martian gravity—and a similar process is used for many missile launches today, Murrow adds.

The two-stage rocket will then deliver the cargo into Mars’s orbit. The second stage will employ what’s called spin stabilization to keep the rocket straight on its journey—the physics are similar to why footballs are thrown with a spiral to keep them straight. Eventually, the rocket’s two stages will fall away along this journey until just the sample compartment and its protective shell are all that’s left floating in orbit. That small section will then get picked up by a European Space Agency ship and brought back to Earth. (Watch an animation about the process, below.)

When is all this happening?

NASA and Lockheed will build and assess the MAV over the next few years. Environmental trials should start around 2026, when parts will be tested at low temperatures and in vacuum chambers to simulate Martian atmosphere. The sample retrieval craft will launch from Earth with the MAV inside it in 2028. If all goes according to plan, bits of Mars should get back to Earth around 2033.

The MAV, like all the other technology that’s part of the mission, is a feat in itself, but the engineers from NASA and Lockheed are especially excited about what the rocket will hopefully  enable scientists to do: look closely at bits of another planet. “I’m ecstatic to think that’s what the ultimate goal is,” NASA’s Franklin says, “to actually be able to bring samples of another planet back to Earth.”

“We get to build the coolest rocket ever,” NASA project manager Jackman says, “but it’s really about the science.”