What could life on Mars look like? This Chilean desert holds some clues.

If alien life exists below the surface of Mars, it might very well have a thing or two in common with these populations. 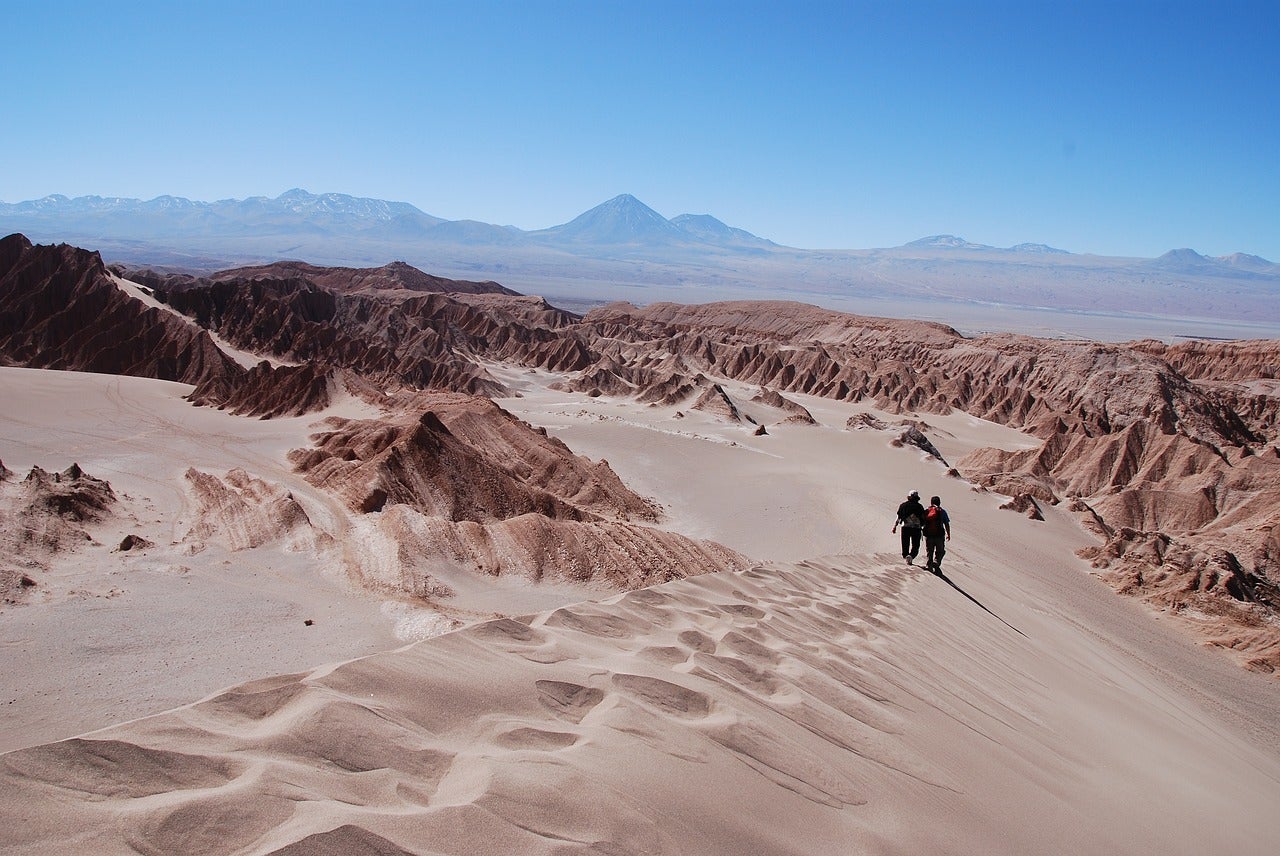 Mars is a cold, dry hellscape, but that doesn’t mean Earth doesn’t share some its more inhospitable traits. If you venture out into the Atacama Desert in Northern Chile, you’ll find the driest place on the planet (outside of the North and South Poles), where the average rainfall is 0.6 inches per year—and even less in some locations. That makes it an imperfect, but useful analogue for Mars, so if you need a place to, say, test out a rover designed to investigate extraterrestrial life somewhere like the red planet, the Atacama Desert is the place to be. An international team of researchers is doing just that, and recently literally unearthed something unexpected.

A robotic rover tasked with testing out an array of instruments in the Atacama Desert managed to dig up subsurface soil samples possessing incredibly specialized and unique forms of microbial life. According to the findings, published Thursday in Frontiers in Microbiology, the study is the first ever to drill beneath the surface of an extreme desert soil like Atacama and recover samples for biological analysis. Moreover, it’s the first to illustrate the ability of life to adapt to this sort of environment, and leaves the door open for the potential that we could very well find signs of similar life lurking beneath the surface of Mars.

“The results are a cause for optimism that bacterial life could tolerate the conditions of the Martian subsurface,” says Stephen Pointing, a researcher based at the Yale-National University of Singapore and a co-author of the new study. “There is nowhere on Earth quite like the surface of Mars [where] the surface has potentially lethal levels of radiation and very little liquid water. A summer’s day on Mars might see equatorial temperatures rise to comfortable 20 degrees Celsius but at night they would plummet to -100 degrees Celsius. Just beneath the surface, however, where the mineral soil and rock provide shelter from the extreme conditions, there is a potential habitat for life.”

The most Mars-like soils on Earth exist in the Atacama desert. They’re dry, nutrient-poor, and extremely salty and alkaline. The purpose of the trial rover mission was essentially to test out the viability of drilling beneath the surface to recover samples that could then be examined for potential Martian “biosignatures,” the chemical signs that life once did (or perhaps still does) exist on Mars.

Drilling’s not easy. You have to ensure you can go down far enough to recover samples without compromising the integrity of any biosignatures. Before we land a brand-spanking new drill-bot on the red planet, we want to make sure it knows what it’s doing. So, in a project funded by NASA’s Astrobiology Science and Technology for Exploring Planets program, Pointing and his colleagues deployed a rover into Atacama in 2013 to see whether rover-acquired samples could be used one day to identify biosignatures of microbial life beneath the surface of Mars.

What they found was entirely unexpected. The subsurface soil samples collected by the trial rover did indeed possess bacteria, able to thrive in extremely salty and alkaline soils. But more galvanizing was the fact that those bacteria communities were distributed in clear, zonified formations—a major sign that these populations were advanced enough to organize themselves in a way that makes the most use of a limited amount of resources. Further down, as deep as 80 centimeters underground, the team found that a specific group of bacteria was able to survive because it learned how to metabolize the greenhouse gas methane.

Pointing finds these findings exciting because bacteria being hardy enough to survive the harsh conditions of the Atacama subsurface, specialized enough to make due with a limited amount of resources and nutrients, and evolved enough to metabolize methane, then extraterrestrial life on Mars could have potentially done the same. “These bacteria clearly survive right at the limit of habitability,” he says.

Before we get over-excited about what a future rover mission to Mars might unearth, there’s plenty of room for caution. The patchy nature of the bacterial communities suggests a “needle in the haystack” scenario where we’re relegated to drilling at random and hoping to feasibly stumble on something. Even more damning, the parts of the soil that containing subsurface bacteria all showed a somewhat recent history of water input—and most of Mars, for billions of years, has been basically bone dry, as far as we know. Any investigation of Martian life that’s informed by these findings would need to have a very good idea of what spots have the best chances of being most recently habitable to life.

Brian Hynek, a planetary scientist at the University of Colorado Boulder who was not involved with the study, believes the study was very useful as a proof-of-concept for the types of technologies we’ll need to really understand the history of habitability on Mars. But he points out that the investigation collected a low amount of biomass, and there was no real correlation between finding microbial life on the surface and finding it within the soil. “To me,” he cautions, “this study demonstrates that our prospects of finding life on Mars in the shallow subsurface in desert soil environments is quite low.”

Moreover, the limitations of using the Atacama Desert to anticipate what we might find on Mars cannot be overstated. “Like all analogs, there are important differences that limit the application of the results to Mars,” says Hynek. They give us a starting point, but Atacama is still nowhere near as harsh as the Martian surface is.

Still, the findings add to our general understanding that life, to quote our lord and savior Jeff Goldblum during his role in Jurassic Park, finds a way. If it’s possible on Earth, it may have been possible on a wetter, warmer Mars a long time ago. And it might still be possible on a Martian world today.