Don't worry, no one has gotten sick yet. 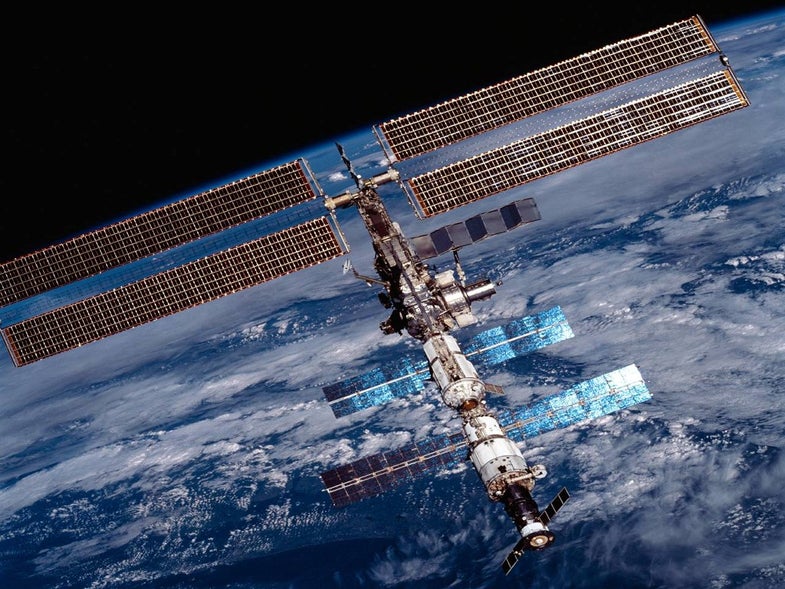 We may be dreaming of Mars this week, with NASA’s InSight lander having touched down on the red planet yesterday. But before we join InSight out in the stars, there’s still a lot of research to be done closer to home when it comes to understanding how bacteria and humans can live together in space. Researchers are finding that all kinds of bacteria are thriving on the artificially-habitable International Space Station. A new study from researchers at the California Institute of Technology’s Jet Propulsion Laboratory looked at one of these—namely, which strains of a potentially infectious kind of bacteria called Enterobacter follow astronauts onto the International Space Station.

Don’t freak out. For starters, none of the strains of enterobacter that they found are going to make astronauts sick. But scientific proof that these strains of the bacteria can thrive up there helps us better understand how to keep the ISS and other spacefaring vessels safe for humans.

“Understanding how microbial life grows in a closed environment like the ISS will help us be better prepared for the health concerns that come with space travel,” wrote study first author Nitin Singh in a statement provided to Popular Science by the JPL.

Enterobacter is a relatively common type of bacteria and benign strains are often found in our intestinal tracts as well as in soil and water. While most are innocuous, at least a handful of strains of these bacteria are harmful to humans and can infect our respiratory and other organ systems. The researchers analyzed five isolated Enterobacter strains collected on the ISS in 2015 as part of a series of experiments done by the JPL (another one, published recently, also looks at the staphylococcus bacteria.) Four of those came from the “waste and hygiene compartment” (where astronauts go to do their business) and the other one was from the exercise area. They sequenced the genomes of each strain and compared them to the genomes of all available Earth samples—comprising more than 1200 different strains—to see if the bacteria on the ISS were like the bacteria on Earth.

They found that the ISS strains most resemble three strains of Enterobacter bugandensis, a potentially pathogenic bacteria. Although none of the ISS Enterobacter can cause illness right now, researchers concluded that they should be watched, because E. bugandensis has caused illness here on Earth.

This study is part of a larger project at the JPL to understand and catalogue the microbial life of the ISS. “This study highlights why it’s important to monitor the microbiome of the ISS,” writes Singh. “Keeping an eye on how microbes grow and adapt lets us take better care of astronaut health, teaching us where and how frequently to clean different parts of the station.”

In space, this is extra-important, he writes, because “human immune systems are especially stressed while in space.” This means that unexpected bacteria—or low quantities of bacteria that wouldn’t make a healthy person on Earth unwell—could potentially have outsize effects.

“I think the concern on the ISS is actually no different than the concern in hospitals,” says David Coil, a University of California, Davis microbiologist who has studied bacteria on the ISS. Like hospitals, on the ISS, the natural bacteria are absent from the environment because of cleaning practices, leaving open niches for harmful bacteria to settle in–and humans themselves are often a source of these potentially harmful bacteria.

Then there’s also the fact that we don’t really understand microbiomes here on Earth. That means every paper has the potential to contribute totally new knowledge to the field. And that information is essential for space travel. “The dream of human exploration through space won’t be possible without understanding the microbial world around us,” writes Singh. “Studying these fields is a crucial part of preparing for that future.”

Maybe someday, Coil speculates, we’ll seed the ISS and spacefaring craft with a prepared microbiome to take with us into the stars, one that promotes astronaut health and is better than the current policies of keeping things as bacteria-free as possible. “We’re not there yet,” he says. “We don’t have the understanding to do that.” But, maybe someday.