Most Missions To Mars Don’t Survive

If you want to go to Mars, fly American 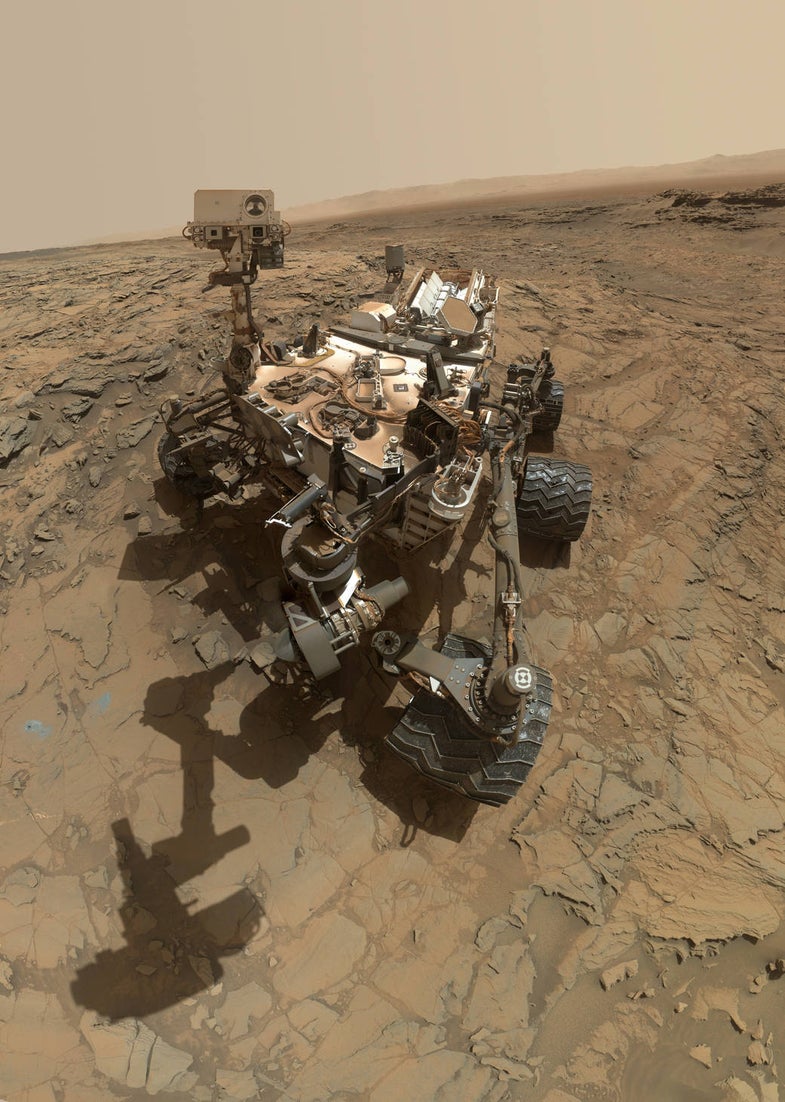 In October 2015 Curiosity used the camera at the end of its mechanical arm to take a self portrait inside Gale Crater. NASA/JPL-Caltech/MSSS
SHARE

There have been 53 missions to Mars since the 1960s, from flybys to rovers, and 23 have accomplished their objectives. That means more than half either never left Earth or failed when they get to Mars.

Eighteen of those 23 successes were launched by the U.S.

Like the space race, the marathon to Mars has been dominated by Earth’s superpowers: the Soviet Union (later Russia) and the United States. A coalition of European countries called the European Space Agency entered the scene in the 1970s, but they focused on collaboration with other agencies and basic research. They’ve worked with NASA on multiple international projects and have only recently launched their own Mars missions. They were in it for the science, not the glory.

But the U.S. and Russia wanted the glory. And though Russia had a few years’ head start, NASA took the early lead. Russia had a series of flyby failures, and when in 1962 they launched their first lander—Sputnik 24—it barely made it to low Earth orbit and fell back down a day later. In the intervening 50+ years the U.S. has racked up the metaphorical gold by safely landing seven landers and rovers, while the rest of the world has yet to land one.

Two years after the Sputnik 24 failure, the U.S. made the first successful Mars flyby, despite a failed launch a few weeks before. Mariner 4 sent back the first pictures of the Martian landscape just two days before the competing Russian flyby mission lost communications. 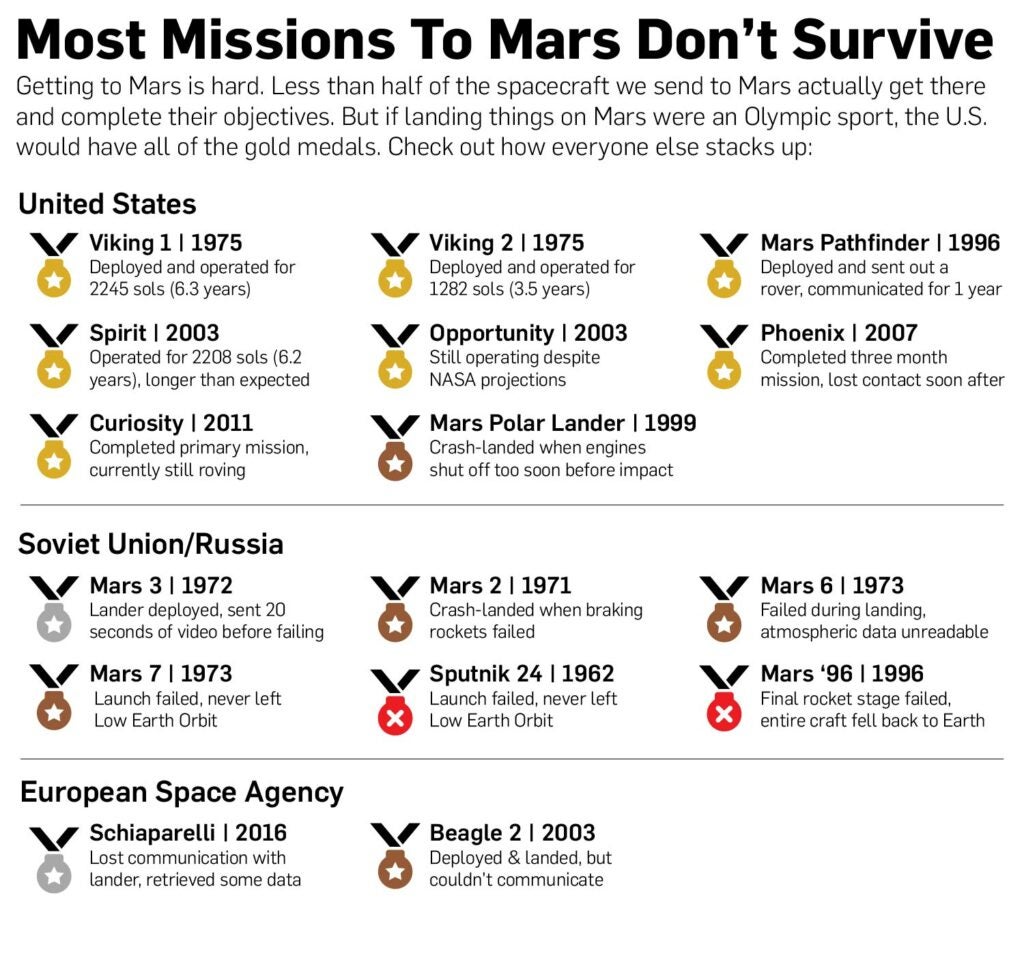 Most Missions To Mars Don’t Survive

In the Olympic event of Mars Landing, the U.S. takes home all the gold.

Russia has attempted nearly every Martian milestone before the U.S. The triumph of having the first flyby, orbiter, lander, and rover all went to NASA, always just after the Soviet attempt. The Russian missions Mars 2 and 3 left Earth before NASA’s Mariner 9, but the U.S. orbiter settled into its position above Mars on November 14, 1971, just two weeks before Mars 2 and 3 arrived. 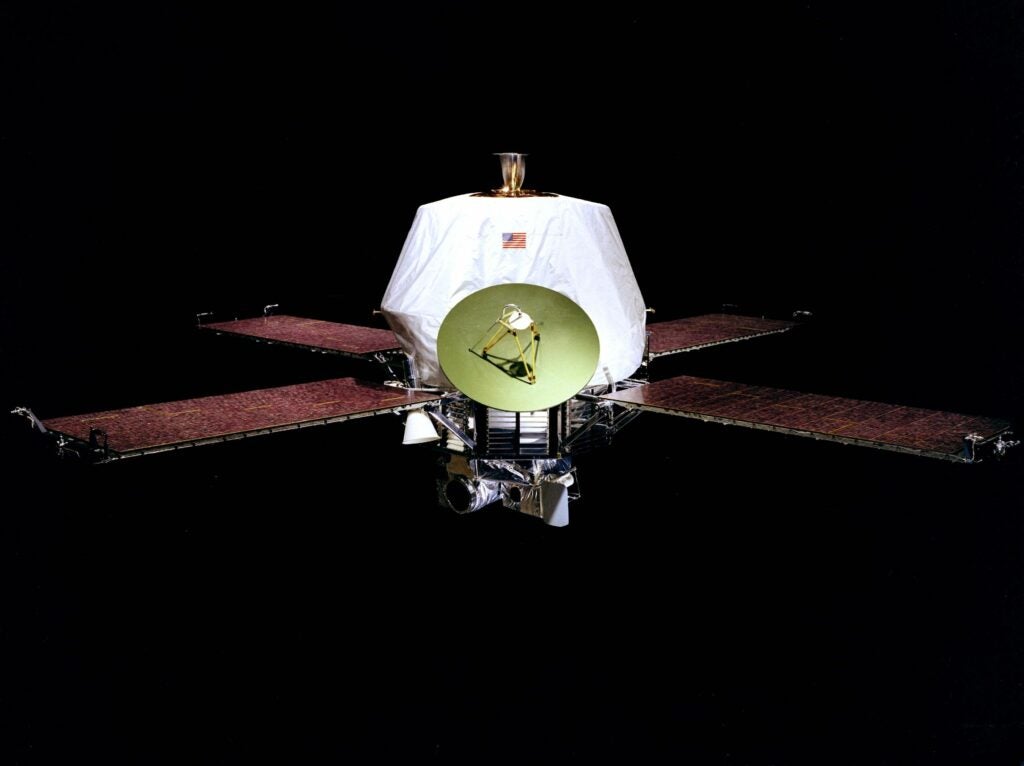 The Mars 2 lander was the first man-made object to reach the surface, but a malfunction during descent caused it to crash. And when Mars 3 dispatched its lander, it did so into a dust storm that caused its early demise 14.5 seconds after landing.

In 1974 the Soviets tried again with Mars 7, but as it approached Mars one of the rockets malfunctioned and instead of touching down it missed the entire planet by 810 miles.

No one landed on Mars with any real success until NASA launched Viking 1 and 2 in 1975, both of which put spacecraft into stable orbit and deployed landers to the surface. The U.S. has been responsible for every single successful Mars lander or rover since that time and has only had one failure. 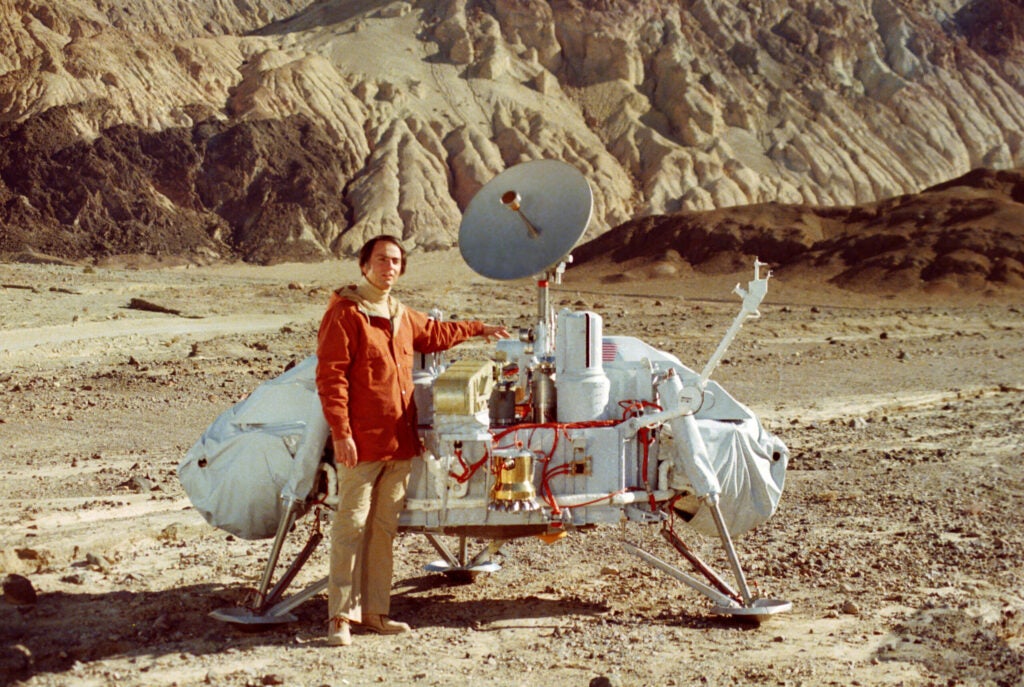 Legendary astronomer and science communicator Carl Sagan rests his hand regally on a model of the Viking lander modules.

The Russians made one more attempt with their ambitious Mars 96, which included an orbiter, two stations destined for the surface, and two surface penetrators. Roger Bourke, who spent most of his career at the Jet Propulsion Laboratory and worked on a series of Mars missions in the 1990s, called Mars 96 “probably the most ambitious planetary mission ever launched by any country.”

Mars 96 never even escaped orbit around Earth. The fourth rocket stage shut off too early, and the craft made three orbits before crashing near Chile.

This isn’t to say that the U.S. has a perfect track record. Let us always remember the Mars Climate Orbiter, which slammed into the Martian earth after they forgot to convert pound-seconds to newton-seconds. But on the whole? We dominate.