The ExoMars orbiter is going strong, and slowing down. 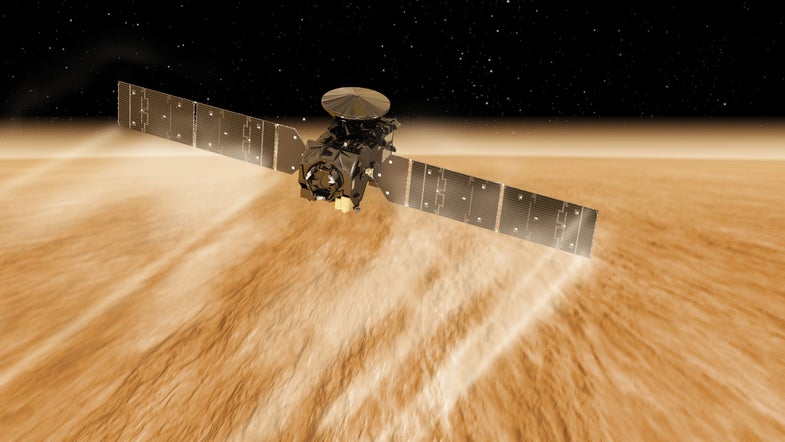 Whether screeching to a halt or gently lowering your speed, slowing down can be hard on Earth. But when braking in a vacuum you need to get creative. That’s why spacecraft like NASA’s Mars Reconnaissance Orbiter and the European Space Agency’s Venus Express use the atmospheres of planets they’re studying as an external brake, slowing down and edging closer to their target orbit over the course of months.

The process is called aerobraking, and right now the ESA’s ExoMars Trace Gas Orbiter is going through its last few weeks of the process, after nearly a year of dipping its solar panels and body into the atmosphere of Mars to slow it down and lower it into an orbit closer to the planet’s surface.

It’s like sticking your hands in the snow to slow yourself down as you speed down a hill on a sled, or brushing your hands along a plastic slide to adjust your speed as you hurtle to the ground. The friction is enough to slow you down to a more comfortable speed—whether you’re a sliding human or a speeding satellite.

Eventually, the ExoMars Trace Gas Orbiter will orbit at 248 miles (400 km) above the Martian surface, roughly the same height as the International Space Station is relative to Earth. At that altitude, circling Mars will only take 2 hours, down from the once-daily orbits it was making last March when it started the aerobraking process, and vastly closer than the 4.2 days it was taking earlier in its orbit.

The orbiter is finally getting to the perfect point, and is now at a height that takes it around the planet every three hours.

The aerobraking process started in March 2017, took a break in summer 2017 (when the Earth and Mars were on opposite sides of the sun), and started again in August. In that time, it’s slowed down by an incredible 1748 miles per hour (781.5 m/s) and come into more of a circular orbit.

Scientists here on Earth have to send commands to the orbiter every day to make sure it stays in the optimal position. The density of Mars’ atmosphere can vary widely, so the scientists have to makes sure the orbiter is positioned in exactly the right way to slow itself down without losing control.

Once the orbiter is in just the right spot, science can begin in earnest.

The Trace Gas Orbiter is (rather predictably) focused on understanding more about the trace gases within the Martian atmosphere. Two suites of instruments on the orbiter will look for small amounts of gases like methane, which on Earth can originate from either geothermal sources like volcanoes or vents, or biological sources, like cows. Figuring out how much methane is in the atmosphere and pinpointing where it comes from could give us greater insight into the nature of Mars.

An onboard camera will image any potential sources of methane the orbiter picks up, while another instrument looks for sources of frozen water just at or under the surface.

The orbiter was accompanied to Mars in 2016 by the Schiaparelli lander, which perished on the surface during its landing. But aother companion, the ExoMars 2020 rover, is slated to launch in 2020.