These diamonds are tiny, flawed, and may come from a long-lost planet

The early solar system was a wild, world-destroying place. 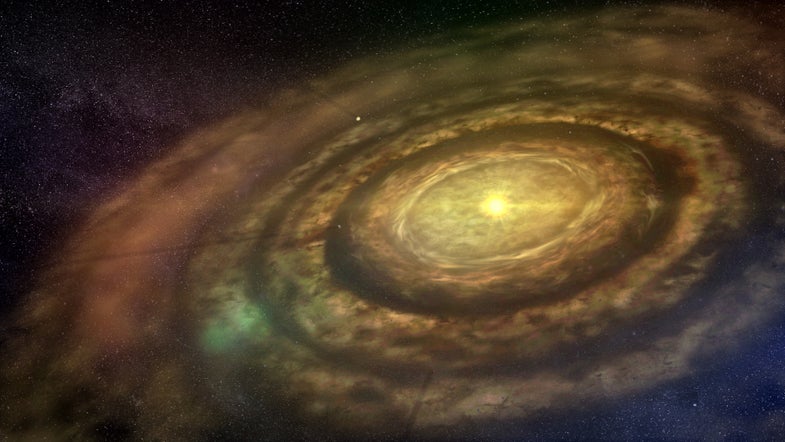 In 2008, a rock laced with tiny diamonds hurtled through miles of thickening nitrogen, oxygen, and carbon dioxide, its exterior heating up as it raced through the thick air. A telescope tracked its progress, watching as the asteroid-turned-meteor exploded. The violent burst 23 miles above the ground sent fragments speeding toward their resting place, dark against the sands of the Nubian desert in Sudan.

The explosion and crash were just the latest of eons of indignities, from a high pressure beginning in a promising planetary start up, to a cataclysmic failure, to billions of years of aimless wandering around the solar system.

A new study published in Nature Communications today offers a dramatic origin story for the meteorite. Based on materials found inside the diamonds nestled within, researchers think this may be the remnant of a long-lost planet or planetary embryo; one that was still in its infancy when the chaos of the early solar system obliterated it.

Diamonds are a geologist’s best friend

In this case, the diamonds aren’t the most important part of this story. They’re just the heavy-duty packaging for much more precious cargo held inside. While a jeweler might see a bit of rock trapped inside a diamond as a flaw, to a geologist it is precious. Because of their strong crystal structure, diamonds can preserve minuscule bits of material that would otherwise disappear under the relentless changeability of the universe over time.

Researcher Farhang Nabiei—of the École Polytechnique Fédérale de Lausanne in Switzerland—was looking at the relationship between the diamonds and the layers of graphite surrounding them when he started wondering about the small pockets of substances trapped within.

Upon closer inspection, he found that the material inside the diamonds could only have been formed at incredibly high pressures—much higher than anything the meteorite would have been subject to as it crashed toward Earth. These diamonds must have held the weight of an entire world—literally. At 20 gigapascals, the pressure necessary to form these substances is likely to occur deep within a planet—one between the size of Mercury and Mars.

This visitor was not from Mercury or Mars. The meteorite was classed as a ureilite, a group of meteorites with a mysterious origin, pieces of some planetary body or asteroid that don’t quite match any of the rocky bodies that humans have recorded today. Researchers already knew that whatever it was, it had probably met its end in the demolition derby of the early solar system, but the scale of the object (or objects) was still unknown until the inclusions were described. The size of the diamonds is another clue to their deep origins.

“100 microns doesn’t seem very large—it’s the size of a human hair—but these are much larger diamonds than you’d get during the transformation of graphite to diamond in a shock,” says Thomas Sharp, a geologist at Arizona State University who wasn’t involved in the new research, but studies meteorites using similar electron microscopy tools.

“An important piece of the puzzle is that the diamonds are large and zoned, which strongly supports the idea that they formed deep in a body’s interior (and not in an impact, for example),” Rebecca Fischer, a planetary scientist at Harvard University who was not involved in the study, said in an email. Fischer points out that the bulk composition of the material (an iron-sulfur compound with nickel (Ni) and phosphorous (P)) inside the diamond is likely to only form at high pressures. “Fe3S is a well studied phase only stable above 21 GPa. Adding in Ni and P can change the pressure at which it is stable, but the authors argue that this wouldn’t be a major effect given the bulk composition that they see. This could be verified in future experimental studies. It will also be interesting moving forward to keep looking at diamonds from ureilites to see if they have captured any other high pressure phases in inclusions, which would offer strong support for the authors’ interpretation.” Fischer says.

This adds to evidence that protoplanets or planetary embryos appeared early in the formation of the solar system, when things looked far less settled than they do today. Jupiter and the other gas planets were growing quickly, and their gravity (along with the Sun’s) had a tendency to throw smaller objects around. Those smaller objects were forming fast, too. Previous studies of isotopes found in Martian meteorites indicate that the planet formed quickly, in the first 2 million or so years of the solar system’s existence. “The implication was that Mars is a stranded planetary embryo of that size that spawned very early, suggesting that there were planetary bodies of that size that formed very early and participated in the planet formation scenarios,” says Meenakshi Wadhwa, director of the Center for Meteorite Studies at ASU, who was not involved with the current research.

“Dynamical models have long suggested the presence of many Moon- to Mars-sized bodies in the inner Solar System at the onset of terrestrial planet accretion, but they are generally thought to have been either incorporated into planets or lost—accreted by the Sun or ejected from the Solar System, for example,” Fischer says. “This is really intriguing evidence that we actually have samples of one of these bodies in our meteorite record, the ureilites.”

Planetary scientists still aren’t sure exactly where the parent body that broke apart into ureilites formed in the solar system, or how it was ultimately destroyed, but they’re analyzing samples gathered from around the world to try to learn more about what came before.

“There have been other classes of meteorites that have been studied where its been suggested that they might have come from a largish parent body, but it wasn’t quantified to this extent,” Wadhwa says. Wadhwa looks at the chronology of the early solar system, measuring how early crusts formed on planetary embryos (2-4 million years after solar system formation*), and other groups research how early the dense metal cores of early planets had to form (before the solar system was 1 million years old). But figuring out how old those objects were was one thing. Estimating how large they would have been is another challenge entirely. “I would say this is the most quantified estimate of a body that size that is no longer around. It is exciting from that perspective.” Wadhwa says.

Shock to the system

Computer models detailing the formation of the solar system predict a rapid formation process. Out of the disk of gas and dust surrounding our star, gas giants swirled together quickly, with more rocky bodies piling together soon after. While today we have only four rocky planets, along with a smattering of moons and asteroids, back then—in the first 10 million years of the solar system—Nabiei says there may have been tens of planetary embryos, each one accumulating as much material as it could.

It was crowded, to say the least. And as in any crowded environment, sometimes there were collisions. Occasionally these were creative processes, with one crash giving rise to our moon. But in other cases, they were devastating.

The meteorite fragments from the desert hold evidence of this destructive process, too. The diamonds are relatively large for meteorites—about 10 micrometers across. The large size of the diamonds was described in previous literature. But the new research by Nabiei and colleagues shows that in addition to serving as time capsules from the early days of our 4.6 billion year old star system, the diamonds are also evidence for some rough interplanetary relations.

The diamonds were surrounded by graphite layers, which isn’t that unusual. Graphite and diamond are just different forms of the same material, carbon. But based on the alignment of the diamonds, Nabiei doesn’t think they formed from the surrounding graphite. Instead, the diamonds likely partially transformed into graphite during a huge, shocking event, likely the same collision that separated it from its parent body, the ill fated planetesimal.

There are still many other ureilite samples to examine and test to see if they fit into the image of the long-lost planet that this research has drawn for us.

“It begs the question, are there more of these?” Sharp says. “Are there other samples with diamonds in them that need further characterization to determine if they formed in large bodies as opposed to shock events?”

“We made a picture based on one specific ureilite sample, now we are trying to look at the other samples and fit them into the picture,” Nabiei says. I ask if it’s like a jigsaw puzzle and he laughs and agrees. “At least now we know that it is a large puzzle,” Nabiei says.

Nabiei is looking forward to presenting his work and talking to other researchers about the paper. He says he was originally planning to discuss this research at a meeting of the American Geophysical Union last December.

“I was really excited to talk about it with people and all the scientists there, but it didn’t happen,” Nabiei says. He is Iranian, and the recent travel ban meant that he was denied a visa. “I’m going to present it in Paris, but for for now at least, the U.S. is off limits for us.”

Nabiei will continue his research in Switzerland, using minuscule fragments to piece together some of the most gaping holes in our solar system’s history.

“We are looking at inclusions that are tens of nanometers and then we are talking about planets that are thousands of kilometers in diameter,” Nabiei says. “It’s like two extremes of the size range. I could never imagine that though microscopy I could talk about planetary formation. It’s like pushing the limits of what we can see.”