Rosalind Franklin missed out on a Nobel, but now she’ll help look for life on Mars

A rover of her own. 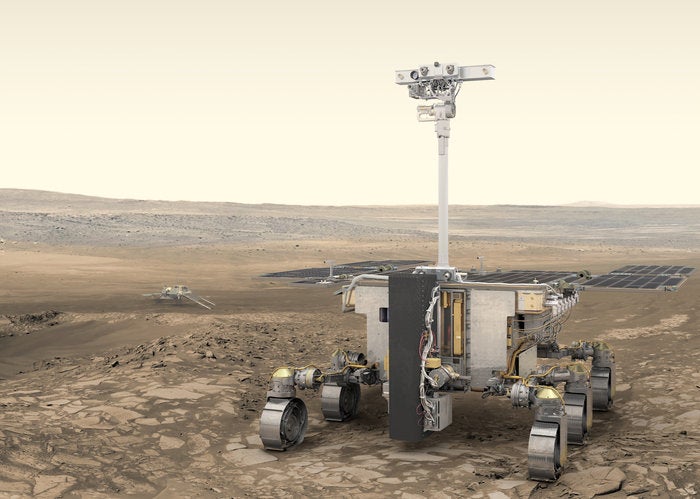 An artist's impression of the artist formerly known as the ExoMars rover. ESA
SHARE

After reviewing 36,000 suggestions, the United Kingdom Space Agency has named the rover it’s sending to Mars in summer 2020: Rosalind Franklin.

The six-wheeled rover is expected to land on the Red Planet the following year to search for clues as to whether or not there is, or has ever been, life on Mars.

Rosalind Franklin’s work in X-ray crystallography contributed to one of the biggest discoveries of the 20th century: the double helix molecular structure of DNA strands. It’s common to name rovers after scientists who had a significant role in research related to the space vehicle’s mission. In this case, it’s finding life––the basis of which is deoxyribonucleic acid, or DNA.

American scientist James Watson and British molecular biologist Francis Crick used Franklin’s team’s images to confirm the shape of DNA in 1953, a discovery that earned them a Nobel Prize. Franklin died of ovarian cancer in 1958 and therefore was never nominated for such honors (people can’t receive the Nobel Prize posthumously, plus, Watson and Crick published their findings in the journal Nature without telling Franklin).

Popular Science spoke with Watson for the May 1963 issue. In the interview, Watson said that Franklin “should have shared” the Prize, since she played an integral role in the process. Crick has admitted that Franklin was “two steps away” from making the discovery herself.

The discovery of ice and what scientists think are dry river valleys and seabeds on Mars has lead them to believe that the planet could harbor at least microscopic forms of life, since there is life in virtually all water on Earth.

Discoveries from NASA’s Curiosity rover published last summer found organic molecules near the Martian surface. The samples, which were collected over five years, didn’t even come close to confirming life, but they didn’t rule out the possibility.

With Rosalind Franklin’s help, scientists were able to understand how DNA works. Now, they could discover life on Mars.