Why NASA needs to flip Curiosity’s ‘brain’ over

It's having memory issues. 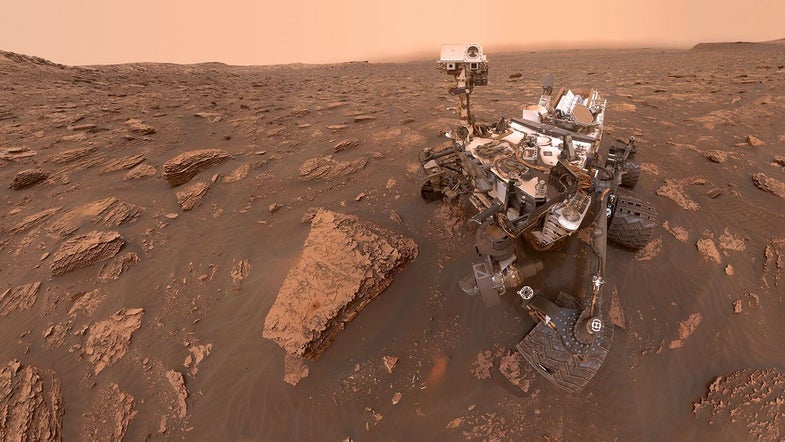 The past few months have been pretty rough on NASA’s Mars rovers. Opportunity is still not responding to NASA’s frequent missives, and this week mission specialists decided that in an effort to rejuvenate Curiosity’s languishing memory, they needed to switch out its ‘brain.’

On the plus side, during most those three months, the car-sized Curiosity rover was doing just fine, relying on juice from nuclear batteries which were unfazed by the dust-darkened skies. Then, over the course of a weekend in September, mission engineers on Earth noticed that the rover wasn’t sending the science data it was collecting on the surface back to Earth. Something was very wrong.

They quickly shut down science operations and tried to figure out what went wrong, but with so little data coming back from the surface, an accurate diagnosis was difficult. So now they’re doing virtual surgery, ordering the rover to switch from the computer it’s been using (Side B) to the redundant computer it carries onboard (Side A). In anthropomorphic terms, they’re telling it to switch brains.

If that sounds familiar, you might be remembering an incident with Curiosity from five years ago. Back when Curiosity landed in 2011 it was using the Side A computer. But in 2013 that computer had a major memory issue that kept interfering with the rover’s operations. NASA had the robot switch to Side B, relegating Side A to the backup position. They made sure Side A’s memory problem was isolated and fixed in the process in case anything similar ever happened to Side B.

Now, the scientists are switching the computers back, but it’s not clear when Curiosity will return to its normal routine of photographing the surface and drilling into rocks.

“At this point, we’re confident we’ll be getting back to full operations, but it’s too early to say how soon,” Curiosity’s deputy project manager Steven Lee said in a statement. “We are operating on Side A starting today, but it could take us time to fully understand the root cause of the issue and devise workarounds for the memory on Side B.”

“We spent the last week checking out Side A and preparing it for the swap,” Lee said. “It’s certainly possible to run the mission on the Side-A computer if we really need to. But our plan is to switch back to Side B as soon as we can fix the problem to utilize its larger memory size.”

Though both Opportunity and Curiosity are in dire straits, there’s still hope that both will eventually recover. And other rovers are coming to the red planet. Both NASA’s Mars 2020 rover and the European Space Agency’s ExoMars rover are set to launch in 2020.