MEGAPIXELS: This is a Martian selfie from the InSight lander

It can’t move, so it’d might as well take something for a spin. 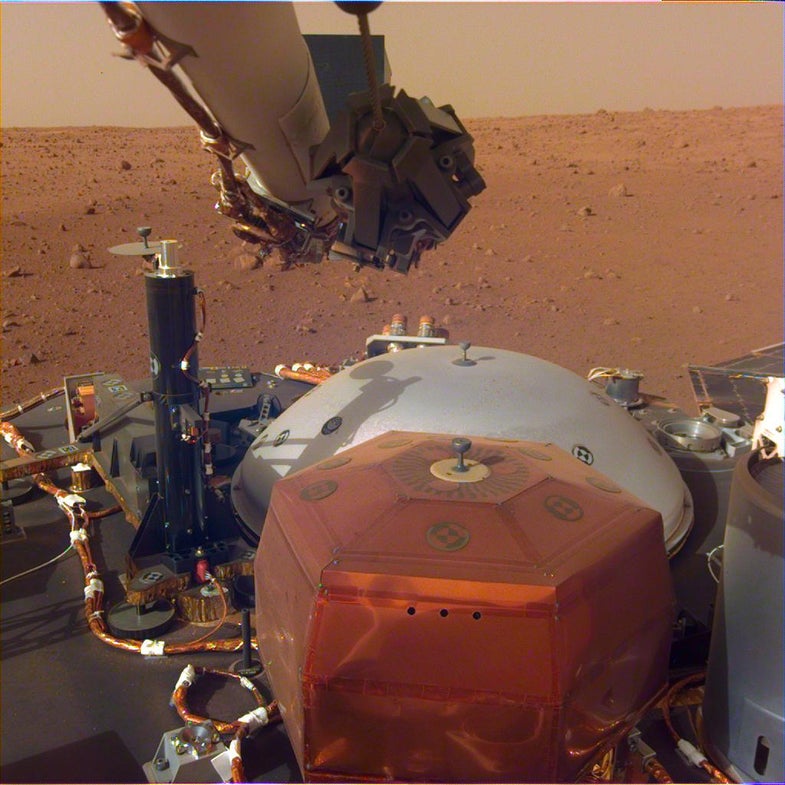 InSight snaps some selfies and prepares to get to work. NASA/JPL-Caltech
SHARE

After a seven-month journey to the Red Planet, NASA’s InSight lander is stretching out and preparing to unpack at its final destination.

InSight touched down safely on the surface of Mars in late November, and promptly unfurled its two wing-like solar panels. Now that the lander—which doesn’t have any wheels to roll around—has powered up, it’s checking out its surroundings with the help of a camera mounted on the “elbow” of a six-foot-long robotic arm, seen hanging down from the top of the frame.

Once the arm has mapped nearby areas it will start to set up shop, placing two instruments onto the ruddy soil. The Seismic Experiment for Interior Structure instrument (the hexagonal orange box) will monitor the ground for marsquakes—even ones that ripple the surface by just a few atoms. The gray plate-cover seen sitting just behind will be placed over it protect from wind and temperature swings.

The arm will also move the black, rocket-like tube to the surface, where it will drill down and drop a thermometer-like device 16 feet into the planet to track its temperature. Researchers hope that tracking heat flow will help settle questions about the interior, such as whether magma still flows deep inside the planet.

To minimize the risk of misplacement, the team expects InSight will proceed slowly but surely, taking as long as two or three months to settle in. The entire mission will last for about two Earth years.