‘The Martian’ author Andy Weir answers your questions about Mars

His favorite astronaut, his most beloved fictional space explorer, and the discoveries that would have changed the plot of 'The Martian.' 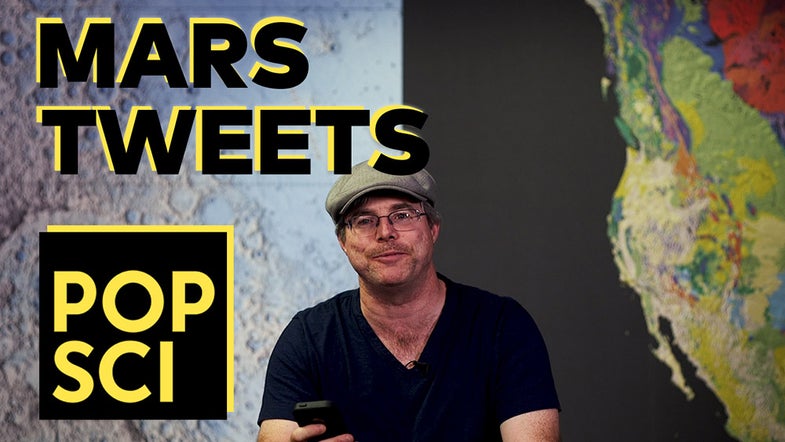 So, @ellipses asks what is your second favorite planet?

@coolmjohnson asks, if Mars had earthquakes, would they be called marsquakes?

Yes, and by the way, Mars does have quakes. They recently found that out. They’ve detected seismic activity on Mars. It’s not quite like Earth tectonic plate movements, but it does have tremors. In response to a question about when his Mars base, Alpha will become a reality, Elon Musk said probably 2028 for a base to be built. I think Elon Musk is a genius, but I think he is also a very optimistic genius. I don’t that think we will have a human presence on Mars in 2028, or really anywhere near it.

@fieldguideTom asks, imagine if you just started writing The Martian today. Would recent discoveries about Mars, like scientists finding a 12 mile wide reservoir under an icecap, change how you might frame or approach the story?

Yes, absolutely. There have already been a bunch of things discovered about Mars since writing The Martian that would’ve changed things. For starters, just ignoring the 12 mile lake under the ice cap, martian soil is absolutely littered with ice crystals. That was not known at the time I wrote The Martian. So all this stuff that Mark Watney had to do, all this chemistry and blowing himself up to create water for his crops, all he needed to do was heat up dirt.

@dvoken69 asks, the real question is does the SCC have jurisdiction on Mars? #occupymars.

My favorite real astronaut is the late John W. Young. He was the commander of Apollo 16, and he walked on the moon. One of my favorite stories about him is, they have the astronauts bio monitors hooked up to them. They can check their heart rate and everything. They have records of what the astronauts heart rates are at the moment of launch, and they always jump up to 150 beats per minute. John W. Young’s heart beat didn’t go above 70. He’s just like yep, on a rocket, going to the moon.

And then as for my favorite fictional space explorer. Well, definitely somebody from Star Trek. But I don’t wanna be too simple and say Kirk. I mean out of all the Star Trek characters, who could fairly be called explorers.

Oh wait, no! My favorite space explorer is The Doctor from Doctor Who of course.

@wearewakinup asks, this is the latest Mars Rover. Can you answer me a few questions? Why does it look like a car? Why didn’t they go in the normal type of rover? In my opinion it’s so easy, they can fake videos easier when pretending they’re on Mars with people, #marshoax, #NASAlies. Look into it, #flatearth.

It comes with a picture of a prototype of a Mars Rover. Just for the record, NASA has never claimed to have landed humans on Mars. So.

And he provided a bunch of potential Space Force logos. I often get asked about my opinion of a Space Force, to which I say we already have a Space Force. It’s called the Air Force. The US Air Force manages everything related to space and space security. They run all of our spy satellites. They have half of the the launch pads at Cape Canaveral belong to the US Air Force. They launch stuff whenever they want. When people ask hey, what did you just launch? They say screw you, we’re the Air Force. So they have total jurisdiction, so to speak, over anything related to defense in space.

@frankcothold asks when’s his, my, next book coming out? I’m ready for more!

Well, probably not for awhile ’cause I haven’t started it yet. And it generally takes me a year to write it, then about six months from there to actually show up on shelves. So my guess is gonna be mid 2020. Sorry about that, I’m slow.

Take a look at the first photo from the surface of Mars, Viking One 1976. What does it make you feel or think?

Oh, that’s the end of these.

Weir is also a “big thinker” for season 2 of National Geographic’s Mars series, which premieres Monday, November 12 at 9 p.m. EST. For more, check out the video, above. You can also subscribe to Popular Science on YouTube.