Mars is missing a lot of this crucial terraforming ingredient

Time for a new plan. 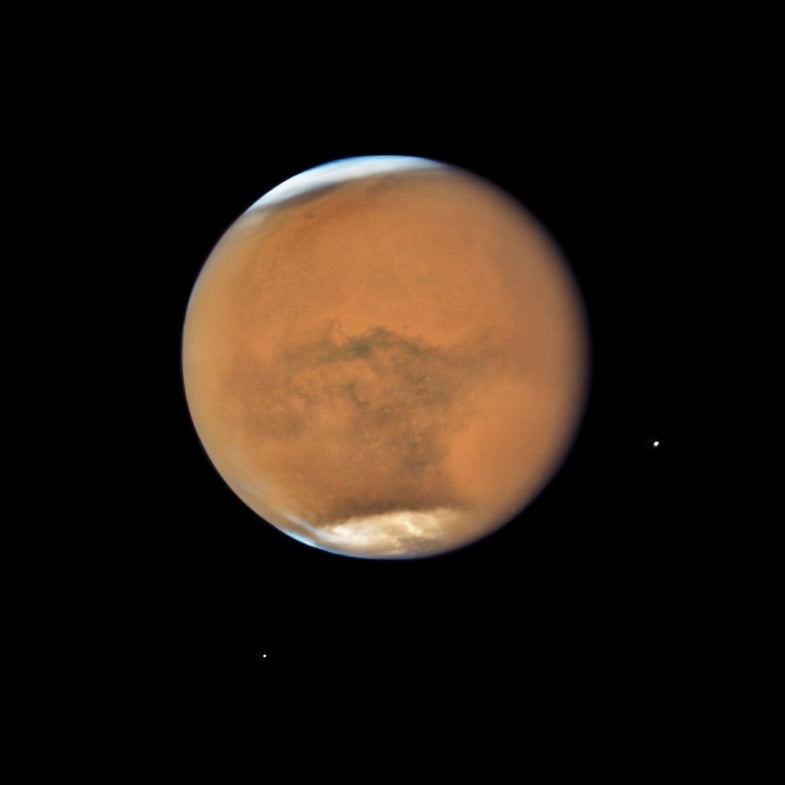 Think of a familiar recipe, one so ingrained in your cooking brain that you can whip it together after a long day at work without much thought. You have your bowls and pans laid out on the counter, the oven is preheated, but…shoot. You are completely out of that one key ingredient, and the closest store is tens of millions of miles away. Time for plan B?

For people who dreamed of terraforming Mars using local greenhouse gases, that might be the situation they find themselves in—in possession of a detailed plan but without enough raw materials to see it through to fruition. A paper published today in Nature Astronomy finds that there might not be enough carbon dioxide on Mars to make the Red Planet into a second blue marble.

Terraforming Mars at some point in the future isn’t a given—there are long-standing ethical concerns about changing another planet to suit our species—but given the popularity of terraforming in popular culture, and the current (if glacially slow) push to send humans to Mars, research into the terraforming question has continued.

One popular idea for terraforming Mars proposed harnessing global warming in order to warm a different globe. The idea is that releasing greenhouse gasses into the Martian atmosphere would trap heat from the sun, melting underground stores of ice and carbon dioxide, and creating an atmosphere that is an approximation of Earth’s.

But that relies on there being enough carbon dioxide trapped in ice reservoirs and rocks to make an appreciable difference when released into the air. And this new paper asserts that there just isn’t enough to change things on the planet dramatically.

Using data collected by current missions to Mars, including MAVEN (the Mars Atmosphere and Volatile Evolution Mission, launched in 2013), researchers were able to pull together a basic accounting of where Mars’ CO2 might be hiding.

“One of the scientific questions for Mars has been where did the carbon dioxide go and where did the water go?” says Bruce Jakosky, a geologist at the University of Colorado, and lead author of the paper. “One of the corollaries of that is the basic question: how much CO2 is left on the planet and can you mobilize it into the atmosphere?”

Planetary scientists think that Mars’ atmosphere used to be much thicker than it is today, which suggests that there used to be much more carbon dioxide in its skies. Earth and Venus still have plenty. On Venus, the gas is mostly in the atmosphere. On Earth, some is in the atmosphere, and some is locked away in rocks and minerals called carbonates. On Mars, some of it is frozen at the poles, some has been locked away in rocks and sediments, and still more has been lost to space.

Since the current atmosphere on Mars is much thinner than on Earth, we’d have to add a significant amount of gas to the atmosphere to get it to an atmospheric pressure where it could support liquid water on the surface—Jakosky says that you’d need about a bar (a unit of atmospheric pressure) of CO2 in order to warm the planet. (Others think that terraforming efforts could make do with less atmospheric pressure). But even if we melted the carbon dioxide reserves at the poles, we’d still come up short, adding only about 6 millibars to the planet’s atmosphere.

There’s more CO2 locked in the rocks and sediments, but it’s practically inacessible with our current mining methods. Jakosky and his co-author, Christopher Edwards, say in the paper that the effort to extract enough carbon dioxide could require the equivalent of massive strip mining operations that could cover entire regions of the planet. With today’s technology, things aren’t looking up.

“We could still terraform Mars. We could manufacture high-efficiency greenhouse gases like chlorofluorocarbons and they would warm the planet, but that requires a more advanced manufacturing system that is far beyond our current capability,” says Jakosky. “So if we do it, it’s pretty far into the future.”

The new paper is all based on current data, but we’re still learning more about Mars every day, and Jakosky says the next few years could bring more interesting results. “This is our best guess today, but as we get more information it might evolve. We do want to see more missions, we do want to see sample return in particular.”

The European Space Agency’s Trace Gas Orbiter is currently at Mars, gathering more information about the planet. And NASA’s Mars 2020 rover could set the stage for an eventual sample return mission, which could provide scientists on Earth with samples taken directly from Mars’ soil and atmosphere.

But even if future missions turn up data that is more optimistic, or we make a technological leap that enables us to change another world, (with apologies to Jeff Goldblum) it’s worth taking a second while asking if it can be done to also ask if it should be done.

“I struggle to understand why we want to terraform Mars,” says Jakosky. “I know a lot of people are pushing the idea having it as a safety valve in case we muck up the Earth, but I think it’s a lot easier to keep the Earth in good condition than to change the climate on Mars.”