Weather got you down? The entire planet of Mars is buried in a dust storm right now.

But that's not too weird for the red planet. 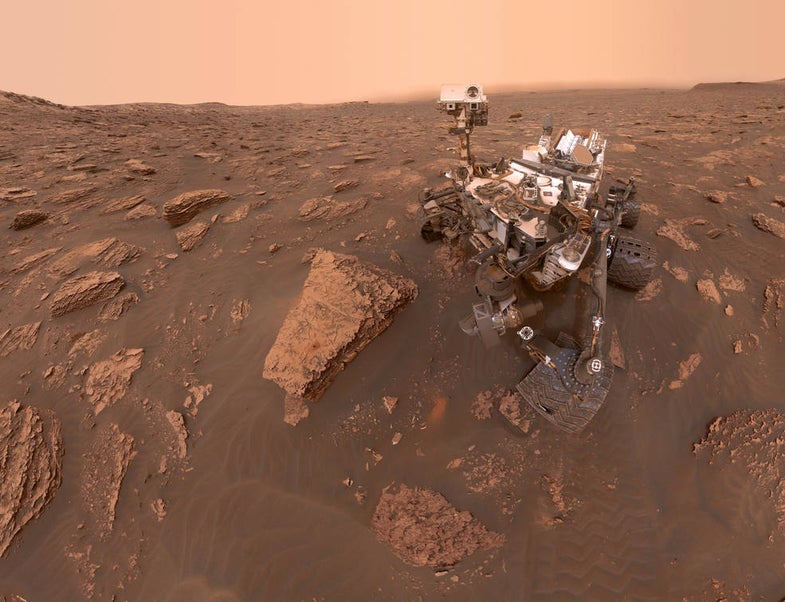 A self-portrait by NASA's Curiosity rover taken on Sol 2082 (June 15, 2018). A Martian dust storm has reduced sunlight and visibility at the rover's location in Gale Crater. NASA/JPL-Caltech/MSSS
SHARE

Mars is having a bit of a dustup. The entire surface is currently smothered in a “planet-encircling” dust storm that began two weeks ago, and swelled into a global event that forced NASA to suspend operations for the Opportunity rover.

Mars is no stranger to dust storms, but this one isn’t a run-of-the-mill tempest. It’s far more gargantuan. These global storms occur only once every 5.5 years or so, swallowing up the entire planet in a cloud of red.

The dust storms on Mars work largely the same as they do on Earth. You have high winds that roll across the surface and move small grains forward, on the order a few hundred microns in size. These grains bounce up into the air, and once they’re just a few centimeters up the increased turbulence takes them higher and higher. Take that situation and watch it cascade into something abhorrently larger, and you have yourself a dust storm—capable of launching dust up to 20 kilometers in the air, covering up large swaths of land.

“The trick on Mars,” says Don Banfield, a planetary scientist at Cornell University, “is that the air density is only about one percent of what it is on Earth, because Mars has a very low atmospheric pressure. The winds will have to be faster to move the particles on Mars around, but it will come off as more or less the same force.” Those winds during these storms top off at 60 miles per hour, but due to a lack of atmosphere, they’ll end up feeling like just a refreshing breeze.” (Sorry, Mark Watney).

Tanya Harrison, a planetary scientist at Arizona State University, explains that heat is the driving force behind dust storms on Mars. “If you have sunlight that reaches the surface and heats it up, that creates an instability where warm air rises up. On Mars, there’s so much of this loose dust lying on the surface that when you have these upward winds, they take a lot of the dust with it.” The particulate dust is so fine and small—way smaller than sand on Earth—that it just hangs in the air, and takes a really long time to settle.

According to Harrison, it’s still a pretty big mystery why some storms stay local and are fairly transient, and why others go global and persist for weeks. But so far, “we know that dust storm season happens at the same time every year—early spring to summer—and the season creates these strong temperature gradients every year.” But it’s still unclear why some years experience regional storms, and some experience global storms. Generally, storms start in the northern hemisphere and are funneled south through topographic basins to the equator. If they cross the equator and make it to southern hemisphere, toward the end of the polar cap, they have a good chance of blowing up into something much more massive. “That’s what we saw happen this year,” she says.

“There’s clearly some kind of feedback mechanism that’s sensitive to conditions, allowing the dust to stay in the air for longer periods,” says Banfield. “But we don’t know what that is.”

And so there’s no way yet to predict how long a regional storm might last, or whether a storm will go global or not. “We’ve only observed about nine storms with ground-based and orbital instruments since 1924. We just don’t have a lot of data to work with.” For instance, a 2007 storm lasted about four months before it finally started to settle down, and it’s still unclear why. The Curiosity rover, which is still active thanks to its nuclear-powered battery, is taking advantage and acquiring what data it can on the ground.

These photos span about a couple of weeks, starting with a shot of the area before the storm appeared.

The storms don’t really pose a massive danger to Martian missions, but there are plenty of ramifications to consider. Opportunity, for instance, needed to go into suspension because it’s solar powered, and the storm is enough to blot out the sunlight from reaching its solar panels (as is the upcoming InSight lander). When you have a storm that’s enveloping the entire planet, that’s a lot of fine, sticky matter that’s waiting to come down. When it finally does, it could cake rovers and landers with such large amounts of the stuff that it might effectively ruin any optical instruments (which is what happened to Opportunity’s infrared spectrometer). Banfield says the best NASA can do right now is hope Martian winds can blow the dust off the rovers, but “it’s kind of the luck of the draw.”

“Dust storms are definitely something we take into a account when we decide when to land a rover or lander on Mars,” says Harrison. Thankfully, “the weather on Mars is pretty repeatable and predictable. we can pick places that are less stormy and less dusty.” Global events are unavoidable, but NASA and its partners can pinpoint regions that are more stable than others. Of course, Harrison points out that ice reserves are located in quite a few northern regions where storms also manifest frequently. If future settlers are after those reserves, “we might have to have a trade off,” knowing that some operations will have to live and work in areas affected by storms.

But dust isn’t exactly healthy to humans. It’s easy to imagine a future human immigrant on Mars tracking dust into their home after a day outside, and that particulate matter finding its way into the body. And it can’t possibly be beneficial to human health. Getting humans to acquiesce to a bit of hazardous red dust might be a hard pill to swallow. Then again, there are plenty of other ways space could kill you.