Mars Rover Curiosity Uncovers A Watery Past Throughout Gale Crater

All around the site where the rover drilled its first sample, evidence shows the rocks formed in watery conditions. 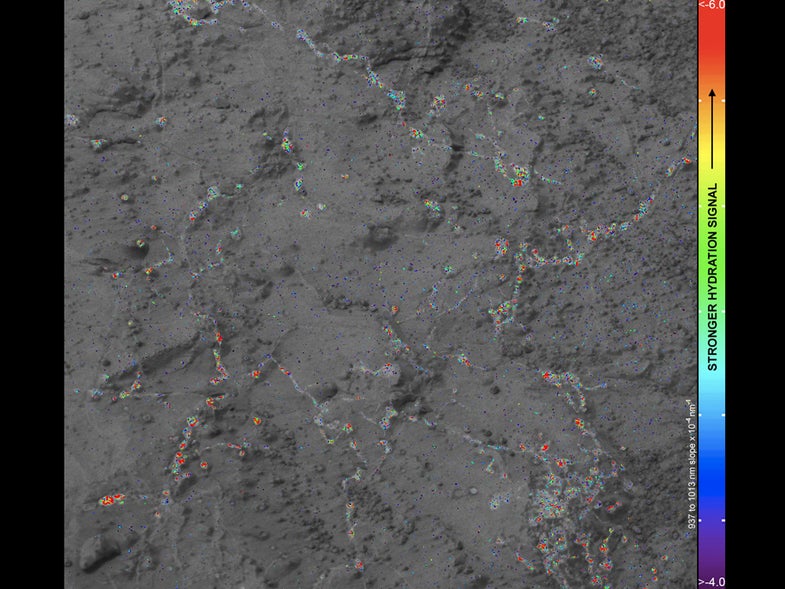 The Mars rover Curiosity’s home in Gale Crater may be dry now, but it was definitely wet long, long ago, scientists said Monday. Curiosity has seen evidence of wet conditions all around the area where it drilled last month and has been parked in safe mode for a while.

The watery conditions extend beyond the site of Curiosity’s drilling, according to NASA.

Scientists working with Curiosity keep noticing some interesting coloration in the rocks in Yellowknife Bay, where the rover has been exploring. Some of the rocks contain fissures, and bright veins crisscross their surfaces. Using a sensitive neutron instrument and the rover’s infrared cameras, scientists were able to study these veins in great detail, and determine they contain signs of water.

“With Mastcam, we see elevated hydration signals in the narrow veins that cut many of the rocks in this area,” said Melissa Rice of Caltech. “These bright veins contain hydrated minerals that are different from the clay minerals in the surrounding rock matrix.”

That’s interesting because it lends further credence to the idea that Gale Crater could have been hospitable for life. Curiosity’s science team announced last week that past environmental conditions there were favorable for microbes. Now it looks like this is true across a broad swath of the area. It’s also worth noting that this water apparently didn’t change the rocks’ chemical composition very much.

The rover’s Dynamic Albedo of Neutrons instrument, or DAN, detected hydrogen in water molecules that are bound up inside minerals in the rock. There’s a lot of variation in its location, but there is more in Yellowknife Bay than earlier on Curiosity’s traverse, according to Maxim Litvak, deputy principal investigator for the DAN instrument at the Science Research Institute in Moscow.

Once Curiosity gets rolling again, it will cross another potentially interesting geologic boundary where scientists could find even more water evidence, Litvak said.

“We are looking forward for the next drive,” he said in a news conference.