The craziest space moment of the year, in one of the craziest places on Earth 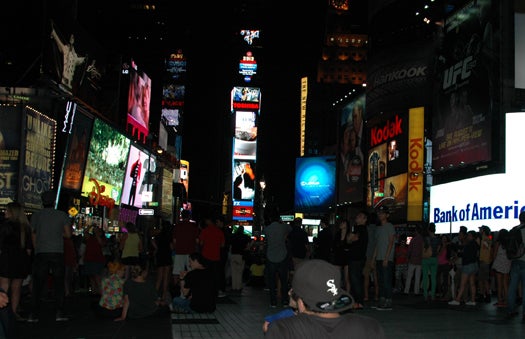 TIMES SQUARE, NEW YORK, NY: A dramatic lightning storm with violent accompanying downpour lit up New York’s skies yesterday evening. But the unpredictable weather didn’t stop New York’s space-loving faithful from gathering in Times Square for NASA’s airing of the Curiosity landing on one of the largest screens in the world. At first, it was hard to tell the everyday tourists from the Curiosity-curious. Times Square is always a madhouse. I wove through crowds and around food carts, passed a woman arguing with an actor dressed as Elmo, and walked by two horse-drawn carriages plodding slowly through traffic. At 1 a.m., about a hundred people remained gazing up at the massive Toshiba screen, just below the ball that drops on New Years’ Eve.

“I’m a total space geek,” said Eli Friedman, visiting from Memphis. He dragged his three friends to Times Square to see Curiosity’s mission control live on the 53 x 53-foot Toshiba screen. They watched as NASA scientists–-including a crowd favorite/internet meme, Mohawk Man (otherwise known as mission Activity Lead Bobak Ferdowsi)-–waited intensely for the craft to land. Friedman couldn’t stop talking about the rover’s ChemCam laser and camera that can analyze Martian rocks from 25 feet away, but the distinct possibility that the landing would end in disaster was on everyone’s minds. (Friedman promised to salute Curiosity with a classic slow clap if things went awry.)

I had forgotten that these screens don’t have their own massive sound systems; instead of hearing interviews and cheering scientists, I heard the typical soundtrack of Manhattan–cars honking, tourists chattering in languages I only sometimes recognized. Some people listened to Third Rock Radio’s narration on their smartphones. 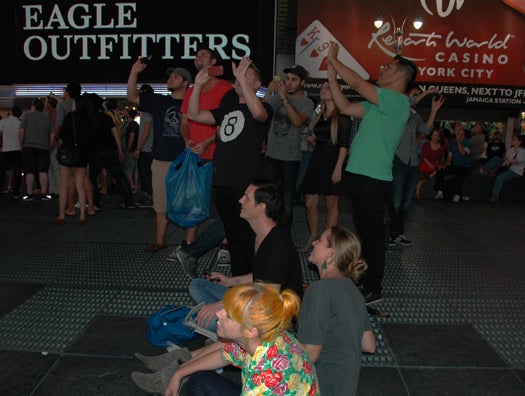 Couples sat on spread newspapers on the damp ground. Friends gravitated into small groups. Of the people I spoke to, most were visiting the city, heard of Curiosity’s adventure and came to Times Square for the night, eager to tell their friends back home in Warsaw, the Czech Republic, Newfoundland and Washington, D.C. about the rover.

Timothy Allen, a marketing manager with the National Institute of Aerospace, filmed the onlookers and passed out Curiosity stickers. But really, he was waiting to see the people at mission control jump, hopefully for joy, after the seven minutes of terror passed and Curiosity communicated with NASA.

THE FINAL MINUTES BEFORE LANDING

Allen looked at his watch. The “seven minutes of terror,” in which the lander decreases its speed from 13,000 mph to zero as it moves from the tip of Mars’s atmosphere to the planet’s surface, began. “Right now the rover has either landed or we’ve had a bad day,” Allen said. There’s a delay in communication as well, due to the rover’s 352 million-mile distance from Earth–it takes 14 minutes to receive a signal from the rover. Those are 14 very nerve-wracking minutes.

I walked over to the crowd. The scientists on screen were clearly, infectiously tense. I bent down to talk with a woman, and suddenly, a great cheer rang out. We did it! People took pictures of the scientists hugging on the screen above the square. Groups chanted “Science, science, science!” and a man yelled, “USA is number one!” But for all its importance, the landing did not exactly attract an Olympic-sized crowd.

I walked across the curb and asked a visitor from Newfoundland, Danielle Porter, her thoughts. “It was pretty anticlimactic,” she said. It was a great crowd, but small for the immensity of Curiosity’s landing.

“I was hoping it would be a cathartic group moment for humanity,” says Erik Noren, of New York. He and his friend Chris Walker met up to watch the event, which Walker calls the second most historic recent space event, after the 2004 Ansari X Prize for privatizing space travel. The two were glad for each other’s company, but said they hadn’t met as many new people as they’d expected. 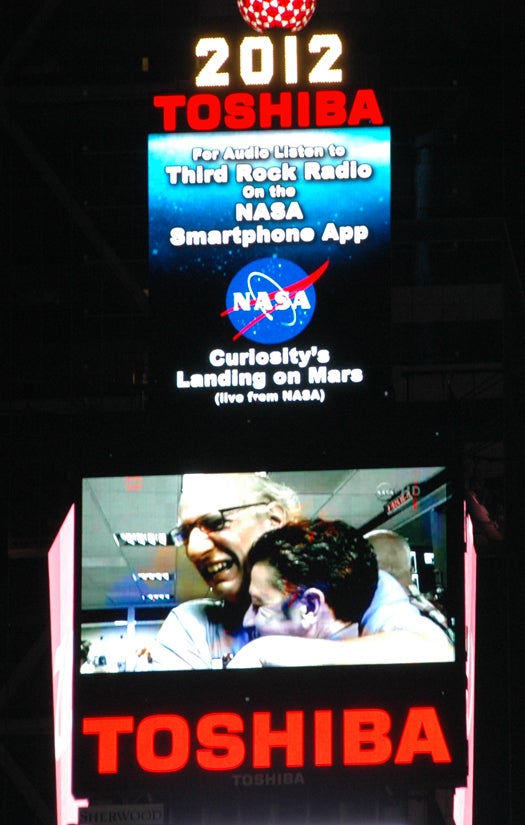 “See all the cheering engineers up there?” said Dan Gareau, an engineer at Rockefeller University. “That’s a good sign.” He’s wearing a pi hat that goes to the fifth decimal place and carrying his miniature husky named Voxel, the word for a three dimensional pixel. I think he came to Times Square to mingle with like-minded Curiosity diehards for a nerdy intellectual symposium–and nerdy intellectual symposia are small events. If only I had introduced him to Noren and Walker. But they’ve left, as have most people. The whole experience was oddly disconnected; we were so far from the screen, without the benefit of any sound. It wasn’t exactly an IMAX experience; those watching at home, in bed, on their computers probably got a better audiovisual experience. The crowd mostly dispersed within about fifteen minutes of the landing.

Shortly afterward, around 2 a.m., I head to the subway. I’m proud of NASA and proud of America. Maybe next time more Times Square screens will carry the Mars mission and more people will intermingle, sharing jokes about where they were during the August 2012 Curiosity landing. Maybe.

I turn one last time and take a photo of the Toshiba screen. “Congratulations Curiosity,” it reads, “on your successful landing on Mars.” I can’t wait to see the pictures that the rover sends. And hear about the rocks it zaps with that laser.