The AEGIS software will help speed up the process of exploring Mars. 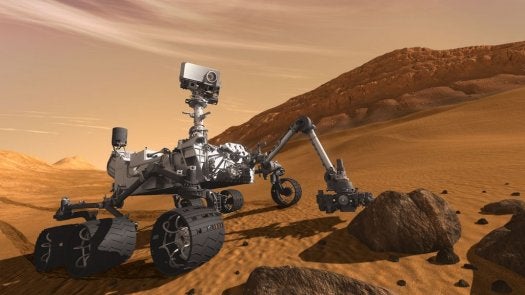 As the Mars rover Curiosity rolls through pebbly Gale Crater, it snaps a multitude of photographs and sends them to Earth, where humans pore over them and decide where to send the rover next. But within a few months, the rover will be able to find salient rocks on its own, speeding the process of exploring Mars.

NASA’s Autonomous Exploration for Gathering Increased Science (AEGIS) software, which has been on board the Mars rover Opportunity for almost three years, will help Curiosity zoom in on features that Earth-based scientists want to see. It will use an automated image-capture process to photograph rocks meeting certain criteria, and then zoom in on them for further study. Scientists can program it to say “if you see this, do this,” which will make it easier to focus on interesting targets. NASA won’t have to go through the arduous process of checking the rover’s images for interesting features, and then telling it to proceed.

Curiosity already had one brain upgrade after it landed, but NASA only just finished its month-long testing regimen to make sure everything works. The AEGIS software will be installed within the next nine to 12 months, according to Information Week.