Today On Mars: Curiosity Arrives At ‘The Promised Land’ 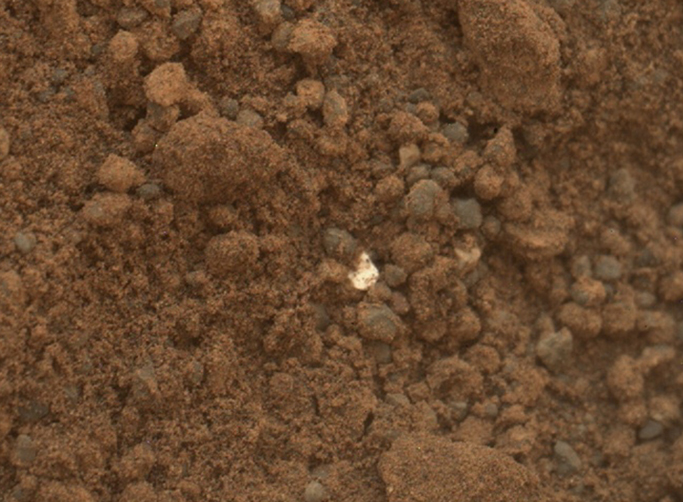 The Mars rover Curiosity has arrived at its long-sought destination: Glenelg, a region where three types of geologic formations converge into a potential bonanza for scientists.

“Glenelg was conceptually a point that represented the three areas,” John Grotzinger, project scientist for MSL at the Jet Propulsion Laboratory, told reporters today. “As part of understanding how those interrelate, we consider ourselves now to be in the promised land.”

Now the rover’s Chemistry and Mineralogy (CheMin) instrument is analyzing a scooped sample of dirt from a site inside Glenelg called Rocknest. This is a major step for the rover, whose ability to X-ray sand is a crucial part of its two-year mission.

To prepare, Curiosity rinsed its instruments with some dirt to ensure any Earthly contamination was removed.

In the process of scooping those mouthfuls, it spotted some bright material. One of the pieces turned out to be a piece of the rover itself, a shard of plastic that fell off but didn’t cause any harm. But the other shiny things, including the object in the image above, are native to Mars.

There are two theories about what it is, Grotzinger said. It could be a type of mineral that breaks along a cleavage point, exposing a flat surface to sunlight; or it could be the result of some process inside the soil that results in certain minerals. Scientists “very much would like to study this,” he said. The rover’s laser eye will zap the shiny material within the next few days to get a sense of what it contains. Then Curiosity will continue exploring the Glenelg region, probably through the end of the year.