The rover is getting ready to fire up its drill. 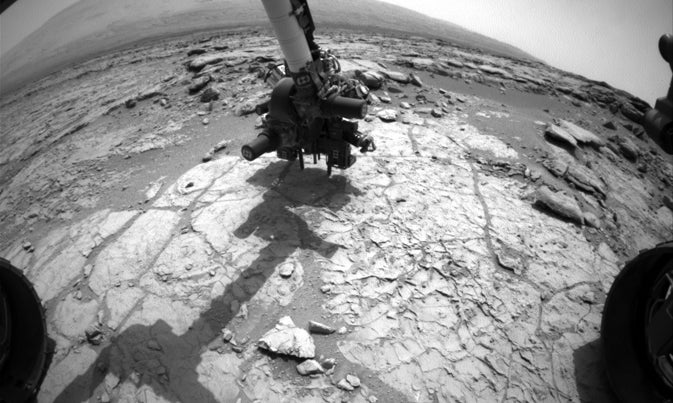 The beefy arm on the Mars rover Curiosity is equipped with many tools, but none is more exciting to planetary geologists than its drill. Curiosity is the first robot ever sent to another world equipped to drill into that world, and find out its secrets. A long series of tests, culminating in a drill-punch over the weekend, is getting NASA ready for the first exciting boring operation.

Curiosity’s drill bit slammed into the surface over the weekend, but it didn’t rotate, so it wasn’t really drilling. It just proved that it can breach a rock’s surface and expose its interior. This is called a “drill-on-rock checkout,” and it’s designed to use the hammer part of the hammer-drill action. This will assure engineers that the percussion mechanism and all the controls work properly and are properly tuned, NASA says.

After that, the rover will make tiny drill holes to make sure the powder looks right. It will not drill deep enough to scoop anything up, but it will verify that the drill is making powder the way engineers expect.

If NASA deems the rock suitable, then the hammer drill will finally spring into action, boring deeper into rock to bring out powdered samples that the rover will swallow, bake and analyze. NASA will probably drill a bunch of test holes before a suitable science-hole is chosen.

The Spirit and Opportunity rovers were able to brush rocks and grind against them with a special abrasion tool, but they couldn’t drill inside them. This unique ability will help Curiosity understand whether its home in Gale Crater could have ever been a hospitable home for life. You can read all about its ongoing mission here.