The Mars rover Curiosity’s first roll was more than a cause for celebration — it will help pinpoint where the... 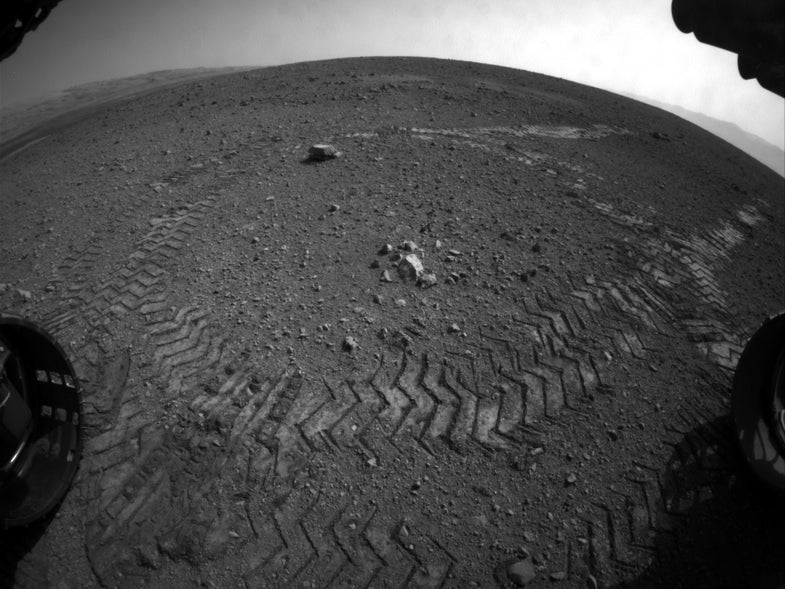 The Mars rover Curiosity’s first roll was more than a cause for celebration — it will help pinpoint where the rover set down, and emblazon the name of its maker into the Martian soil. Curiosity’s wheels have holes arranged in the Morse code pattern for “JPL.”

Each of Curiosity’s six 20-inch-diameter wheels has a zigzag tread and a dash-dot pattern (.— .–. .-..), which translates into the short and long signals of Morse code for the letters JPL. Engineers at the Jet Propulsion Laboratory, where the rover was built, designed it this way in homage to the unmanned planetary systems center. It’s also to serve as a sort of wheel-based odometer.

Matt Heverly, lead rover driver, said in a news conference that the tracks will help the team figure out the rover’s position. “If we are in sand dunes where we don’t have lots of rock features around us, we can use those patterns to do our visual odometry,” he said.

Curiosity’s first roll is the latest in a series of checkouts it must finish before driving to its first science target. The science team found out that some debris kicked up by the rover’s sky crane rocket backpack landed on one of its wind sensors, scrambling its data-collection abilities. But all things considered — from the thundering launch to radiation-filled journey to Mars to the crazy sky crane delivery — Curiosity is a picture of health.

Eventually, the rover will traverse through Gale Crater to Mt. Sharp at its center.