Mars Rover Curiosity Drives Itself For The First Time 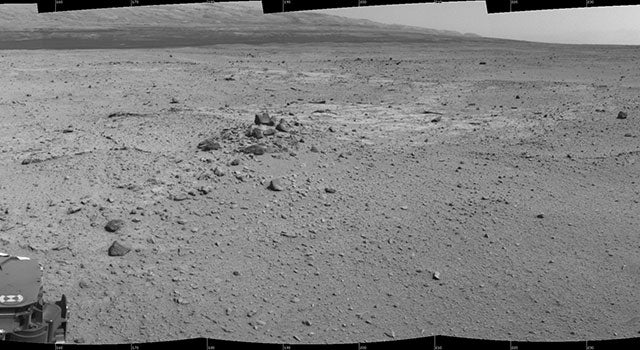 The rover Curiosity, our best friend on Mars, has always had the ability to pilot itself around its new home. But for its first year away from Earth, it’s been piloted remotely by humans here on its birth planet. That just changed: this Tuesday, Curiosity officially drove itself for the very first time.

Curiosity has an autonomous navigation system that visually analyzes the terrain in front of it. Here’s how it works, from NASA’s press release:

‘Curiosity takes several sets of stereo pairs of images, and the rover’s computer processes that information to map any geometric hazard or rough terrain,’ said Mark Maimone, rover mobility engineer and rover driver at NASA’s Jet Propulsion Laboratory, Pasadena, Calif. ‘The rover considers all the paths it could take to get to the designated endpoint for the drive and chooses the best one.’

The autonav was flipped on because the remote operators couldn’t quite see the terrain directly in front of the rover; they knew they wanted Curiosity to go from point A to point B, but what lay in between was unclear. So Curiosity got to drive herself–NASA refers to Curiosity as a “she”–for the very first time.

Right now Curiosity is on its way to Mount Sharp, the highest peak within the Gale Crater, where Curiosity landed. The trip could take anywhere from nine months to a year, at which point Curiosity will do some scientific testing on the mountain.

You can read more about the trip over at NASA’s site.