Today On Mars: First Physical Evidence Of A Once-Flowing Stream

For the first time, scientists can actually observe the remnants of flowing water on Mars. 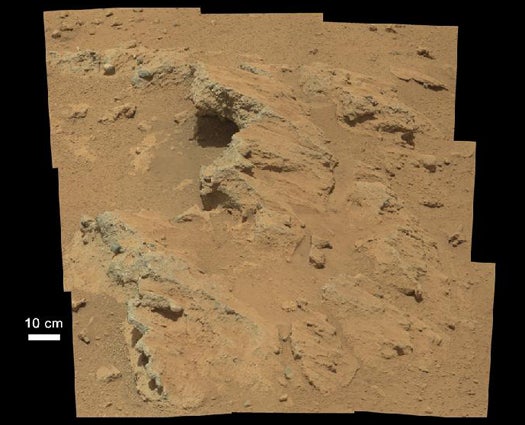 Scientists have known that water flowed on Mars at one point, but until now, what that flow looked like has remained educated speculation. Now a discovery changes that. Mars rover Curiosity has found gravel that was once part of an ancient stream. This image shows the Martian rock outcrop where that gravel is.

There’s a few facts we already know. Scientists started taking a closer look, and from the size of the gravel, we know the speed of the water in the stream (about three feet per second) and its depth (between ankle- and hip-deep). The roundness of the stones in the gravel even indicate they traveled long-distance, from above the rim of the Gale Crater (the slope of the crater is Curiosity’s destination). We can also tell it wasn’t a rare event; the stream flowed for years.

The bits of gravel varied in size from grain of sand to full-on golf ball, according to a statement from NASA. That means it couldn’t have just been blown over by wind. Water made it happen.

So now that it has this find under its belt, what else is Curiosity searching for? More evidence of life. From NASA’s statement:

The slope of Mount Sharp in Gale Crater remains the rover’s main destination. Clay and sulfate minerals detected there from orbit can be good preservers of carbon-based organic chemicals that are potential ingredients for life.

During the two-year prime mission of the Mars Science Laboratory,esearchers will use Curiosity’s 10 instruments to investigate whether areas in Gale Crater have ever offered environmental conditions favorable for microbial life.