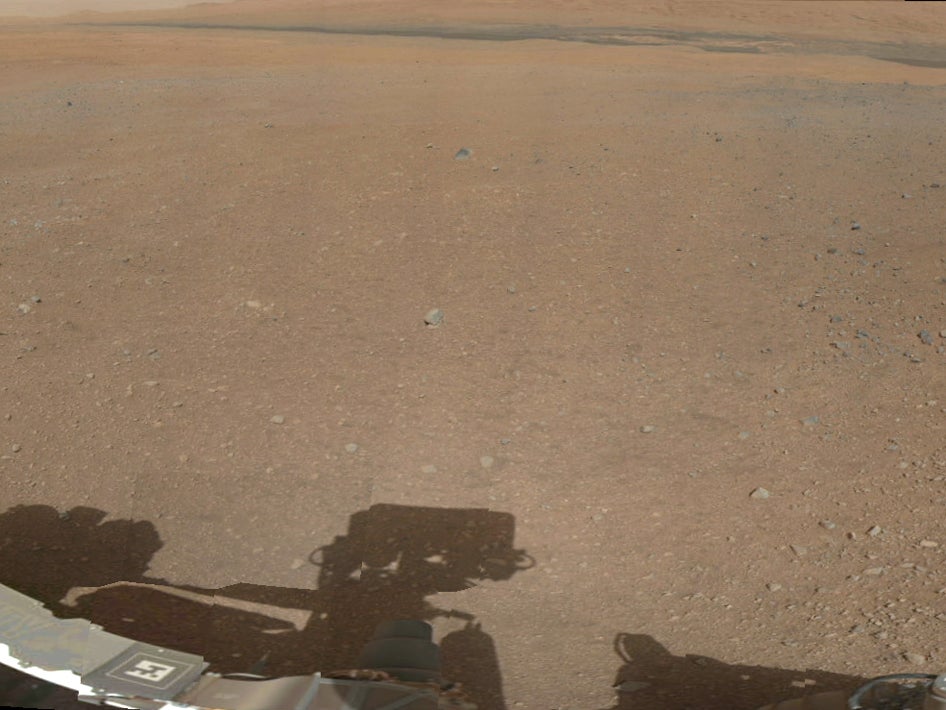 This is the first 360-degree panorama in color of Curiosity’s landing site in Gale Crater on Mars. The panorama was made from 130 different 144-pixel by 144-pixel thumbnails taken by the Mast Camera. . Scientists will be taking a closer look at several splotches in the foreground that appear gray. These areas show the effects of the descent stage’s rocket engines blasting the ground. What appeared as a dark strip of dunes in previous, black-and-white pictures from Curiosity can also be seen along the top of this mosaic, but the color images also reveal additional shades of reddish brown around the dunes, likely indicating different textures or materials.

After a couple days of black-and-white imagery and blurry color thumbnails, the Mars rover Curiosity has downlinked its first full-color, 360-degree view of its new home in Gale Crater. Click past the jump to enlarge the whole thing–it’s incredible.

The image was brightened during its processing, because it’s not actually this sunny on Mars. The planet is another 50-ish million miles from the sun, and it only receives half the sunlight Earth does.

Still, it’s bright enough for the rover to see its own shadow. The pebbly ground, which may be part of an ancient alluvial fan (water-flowing area), is also clear. Those grayish splotches are areas where Curiosity’s sky crane descent stage blew away the dust with its rockets, and those will be interesting targets for scientists. Curiosity team members want to study the bedrock at Gale Crater to understand how the crater formed and what minerals are present there. They need to be careful the hydrazine rocket fuel doesn’t interfere with measurements, however, which is one reason they don’t plan to visit the descent stage itself, which isn’t too far away.

You can also clearly see sand dunes at the top, which appeared as a dark strip in the black-and-white images the rover previously sent this week. In color, you can see more detail and make out brownish, reddish areas, which indicate different rock textures and materials.

Curiosity will be sending lots more postcards from Mars, along with its science findings — check with us for the latest updates.