We owe a lot to our wheeled rovers. Opportunity has contributed reams of data concerning the geology of Mars, while... 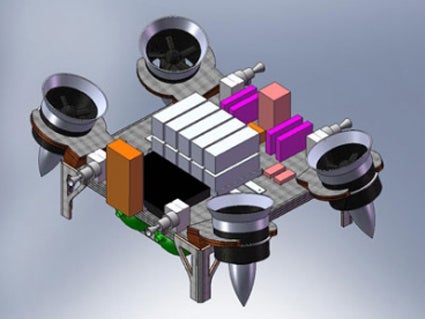 We owe a lot to our wheeled rovers. Opportunity has contributed reams of data concerning the geology of Mars, while Spirit has found possible evidence of past water there. But Spirit is stuck in the sand while Opportunity lumbers slowly toward Endeavor crater at a top speed of 2 inches per second. A team of MIT researchers thinks we can do better, and to prove it they are developing a new kind of planetary explorer that hops, rather that rolls, across a planet’s surface.

The Terrestrial Lunar and Reduced Gravity Simulator, or Talaris, is a collaborative effort between students and professors at MIT’s Department of Aeronautics and Astronautics and the Charles Stark Draper Lab as part of MIT’s effort to win the Google Lunar X Prize. One of the requirements for that $20 million prize is a 500-meter journey across the lunar surface by a robotic rover. If Talaris is successful, a hopping rover based on its design should be able to cover that distance, and then some, with ease.

Talaris employs two propulsion systems, one consisting of four ducted fans that counter the vehicle’s weight to simulate low-gravity environments, and another compressed nitrogen system that maneuvers the rover laterally. Researchers can adjust the ducted fan power to simulate different gravity conditions in different environments (say, the moon versus Mars), allowing them to repeatedly test guidance, navigation, and control algorithms to develop the right software.

A leaping rover equipped with such guidance software could avoid Spirit’s fate and Opportunity’s sluggish speed by simply leaping into craters or over mountains or obstructions. It could then collect data, perform some science, and hop right back out. Depending on the size of the craft and the gravity involved, a Talaris-based rover could leap for feet, for yards or even for miles across a planet’s surface quickly and without worrying about the hostile terrain below. Compared to the handful of miles traveled by NASA’s Martian rovers over several years of operating, that’s quite a leap.

Of course, a terrestrial hopper has one major drawback — fuel. Whereas our wheeled rovers run on solar power, a hopper would need fuel, and fuel is limited. Hoppers could only make a certain number of leaps before their nitrogen or some future fuel source runs out. The MIT team is considering designs that could be useful after the hopping fuel runs out, including designs that might turn to solar-powered rovers when their hopping days are done.

If the proper funding is secured, a real terrestrial surface hopper could be on its way to the moon by 2014, which is the deadline for Lunar X Prize teams to get their technology to the moon.