After 12,000 Days in Space, Voyager 1 Heads for the Solar System Boundary

Next time you’re marveling at the fact that Spirit and Opportunity have been roving Mars for over six years now,... 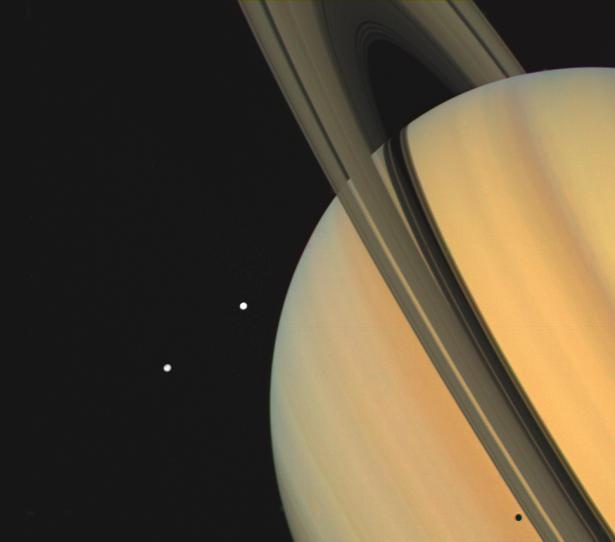 Voyager 1 photographed Saturn and two of its moons, Tethys (shown here) and Dione in November 1980. Shadows from Saturn's three bright rings and Tethys can be seen on the cloud tops on Saturn. NASA/JPL
SHARE

Next time you’re marveling at the fact that Spirit and Opportunity have been roving Mars for over six years now, ponder this: the two Voyager spacecraft have been hurtling through our solar system for nearly 33 years. Today, Voyager 1 hits a mission milestone of operating continuously for 12,000 days. The spacecraft launched on September 5, 1977, while Jimmy Carter was president, and has now traveled 14 billion miles.

Voyager 1 made its closest approach to Jupiter in March 1979, coming to within about 217,000 miles of the planet’s center and making detailed observations of Jupiter’s moons. During its flyby of Saturn in November 1980, the spacecraft’s cameras and remote sensing instruments revealed stunning images and information about Saturn’s rings and atmosphere, as well as its giant moon Titan. In early 1990, Voyager 1 captured the now-famous image known as “Pale Blue Dot.” As the spacecraft was on its way out of the solar system, astronomer Carl Sagan commanded it to turn its camera and take a picture of planet Earth dangling in the vastness of space.

By early 2005, Voyager 1 was about 94 times farther from the Sun than Earth is. Within the next five years, the spacecraft will enter interstellar space, where it will study the boundaries of the solar system, including the Kuiper Belt. Long-life nuclear batteries are expected to power Voyager 1 until at least 2020, when it will be more than 13 billion miles from Earth.

Voyager 2, which completed observations of Uranus and Neptune in addition to Saturn and Jupiter, reached its 12,000-day milestone on June 28. The two space probes are the most distant human-made objects in the universe. 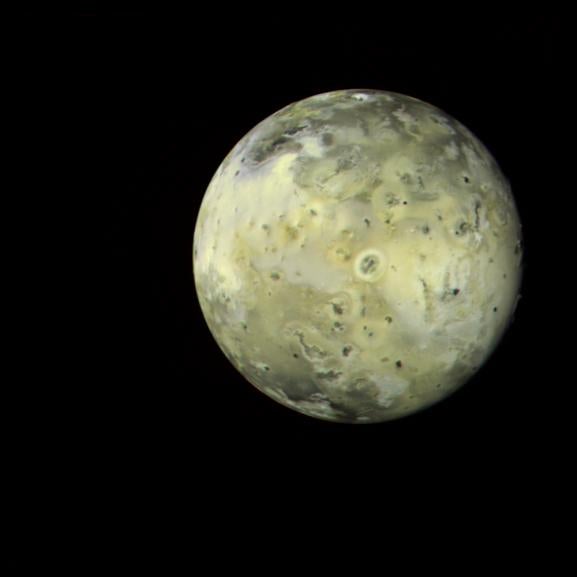 This image of Jupiter’s moon Io was created from several frames taken by Voyager 1 in 1979. Io is about 500,000 miles away from the spacecraft here.

Voyager 1 photographed Saturn and two of its moons, Tethys (shown here) and Dione in November 1980. Shadows from Saturn’s three bright rings and Tethys can be seen on the cloud tops on Saturn. 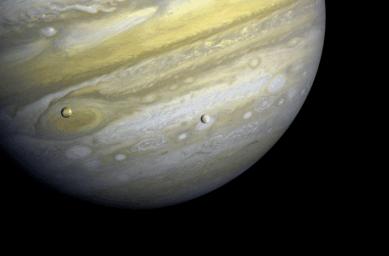 Voyager 1 took this photo of Jupiter and its moons Io (shown here) and Europa in 1979. Io is about 220,000 miles above Jupiter’s Great Red Spot. 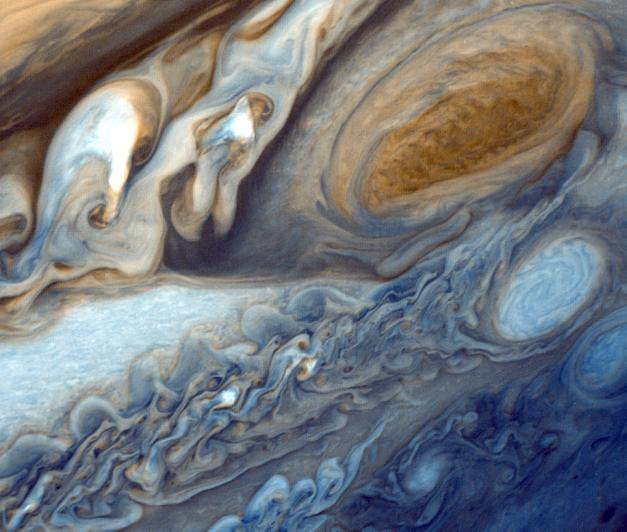 This Voyager 1 image of Jupiter’s Great Red Spot was assembled from three black-and-white negatives and then processed to produce the color image. 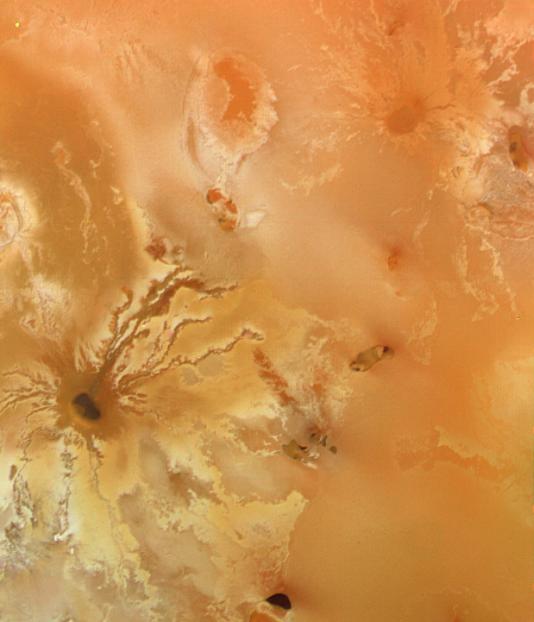 This color picture of Jupiter’s moon Io was taken by Voyager 1 in 1979 at a range of 77,100 miles. The dark spot with the irregular radiating pattern near the bottom of the photo may be a volcanic crater with radiating lava flows. 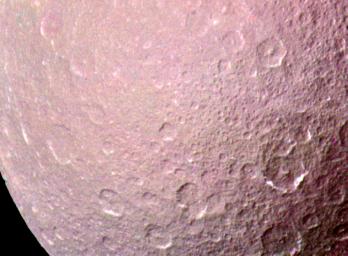 This image of Saturn’s moon Rhea was taken just before Voyager 1’s closest approach to the moon in 1980. The visible area is heavily cratered and indicates an ancient surface that dates back to the time immediately after the formation of the planets. 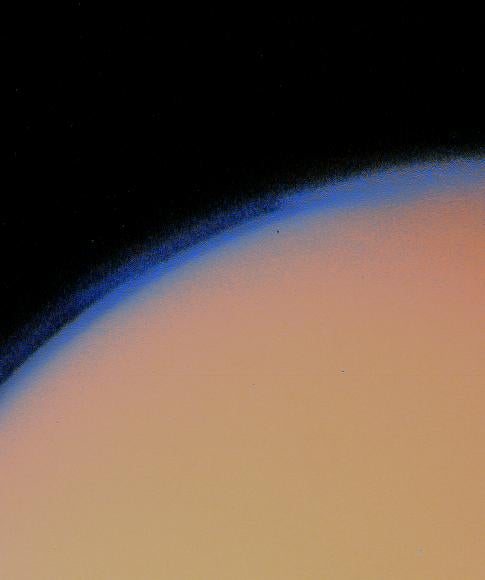 This enhanced Voyager 1 image taken in 1980 shows Saturn’s largest moon Titan enveloped in a thick layer of haze. At Voyager’s closest approach to Titan, spacecraft instruments found that the moon has an atmosphere far denser than that of Mars and possibly denser than Earth’s. 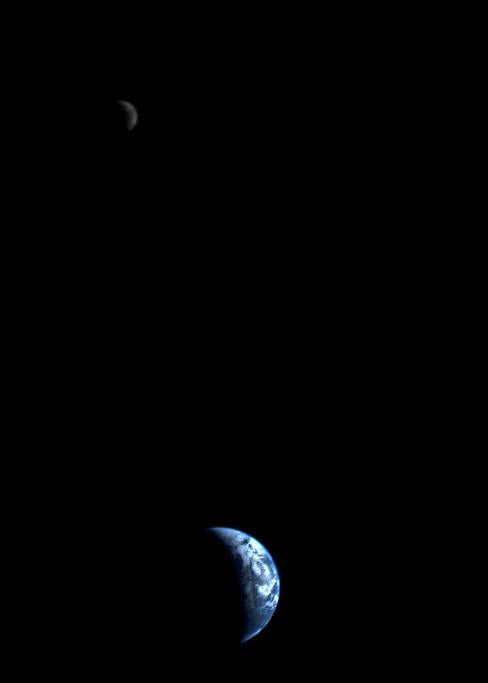 This 1977 image of a crescent-shaped Earth and Moon was the first of its kind ever taken by a spacecraft. The Moon is at the top of the picture and beyond the Earth, as viewed by Voyager 1.
jupiter
nasa
solar system
Space
Technology