Researchers at Big Bear Solar Observatory have tuned their adaptive optics array and achieved first light, capturing this image of... 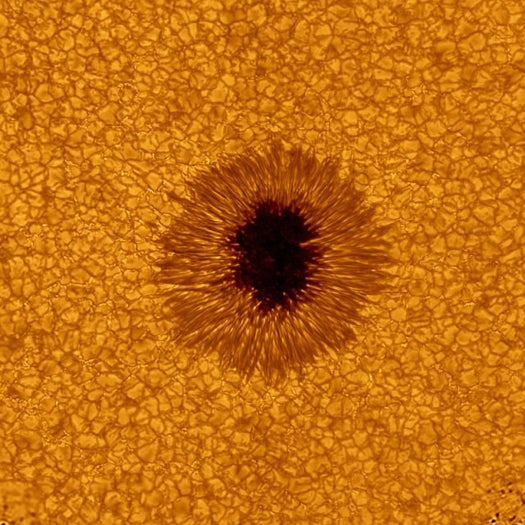 Researchers at Big Bear Solar Observatory have tuned their adaptive optics array and achieved first light, capturing this image of a sunspot that is now the most detailed ever captured in visible light. The image was captured with Big Bear’s New Solar Telescope (NST), a brand new instrument (as the name implies) with a resolution of just 50 miles on the sun’s surface.

The NST is the precursor to an even-larger telescope, the Advanced Technology Solar Telescope (ATST), which will be constructed over the next decade, allowing Big Bear researchers to build a new kind of adaptive optics system known as multi-conjugate adaptive optics, that should provide them with a clear, distortion-free means of observing the sun from Earth in unrivaled detail.

In the meantime, NST will collect incredibly detailed images of solar phenomena like this that should help researchers understand the complexities of solar weather and its impact on the space climate in our neighborhood of the solar system.