With President Obama taking the budget axe to some of NASA’s most darling projects lately, it makes sense that the... 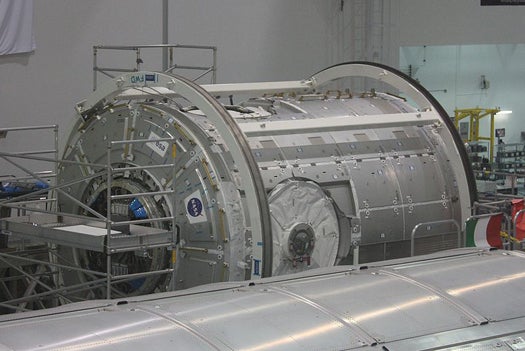 With President Obama taking the budget axe to some of NASA’s most darling projects lately, it makes sense that the agency might look at ways to cut down on waste by getting a little more mileageout of its current hardware. A proposal by NASA’s “Blue Sky” group would do exactly that, repurposing a room on the ISS as a crew capsule for a manned mission to an asteroid.

Node 3 is one of the newest additions to the space station (it’s the one with the big panoramic cupola window) and contains everything an astronaut on a deep space mission might want: Life support systems, astronaut sleeping quarters, and a nice view. If it were detached from the ISS and fitted to two space exploration vehicles, it could serve as crew quarters for a long-duration spaceflight.

At 24 feet long by 15 feet wide, Node 3 would offer a good deal of space in which astronauts could live and work, and that space could be expanded using attachable inflatable structures (the companion space exploration vehicles would also be fitted with pressurized cabins). A spinning centrifuge could even be installed, theoretically, to provide some artificial gravity to help astronauts avoid muscle and bone atrophy during the long trip.

And the timing couldn’t be better. Right now, the ISS is slated to run through 2020, and if its mission is not extended by the partner nations that support it, it will become another piece of orbiting space waste. President Obama has set a 2025 goal to launch a mission to an asteroid, and Node 3 would be freshly defunct in the years leading up to that launch.