During an average day of knocking electrons loose from their host atoms with high-energy lasers, a team of European physicists... 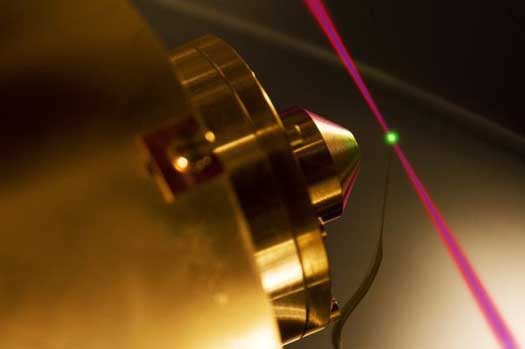 During an average day of knocking electrons loose from their host atoms with high-energy lasers, a team of European physicists uncovered the shortest time interval ever measured in nature. At about 20 attoseconds, the interval is indeed very short. That’s 20 billionths of one billionth of one second. Blink and you’ve missed it many, many times over again.

During photoemission – the expulsion of electrons from an atom by bombarding them with high-energy light – it’s always been assumed that there is no delay between the photons’ impact and the breaking loose of the target electron. But a group of German researchers in collaboration with Greek, Austrian, and Saudi Arabian colleagues decided to challenge that assumption with extremely sensitive time measurement tech.

Their findings turned up two interesting results. For one, they found that electron ejection is not a “time zero” action as once presumed, but that excited electrons hesitate very, very briefly before leaving the atom. But perhaps more interesting, they found that electrons from different orbitals behaved differently, leaving the atom at slightly different times even though they were impacted simultaneously.

The researchers are not exactly sure why this is, but it likely has to do with some small, overlooked influence that electrons exert over one another that is different that the forces exerted on electrons by their nuclei. If that’s the case, the tiny time lag could have big consequences for physics, a discipline ruled by the interactions between atoms and the behavior of electrons. Until they figure all that out, they can at least take pride in their 20-attosecond record for the shortest time interval ever directly measured.