Bacteria taken from the scrumptiously named fishing village of Beer on Britain’s south coast have proven themselves some of the... 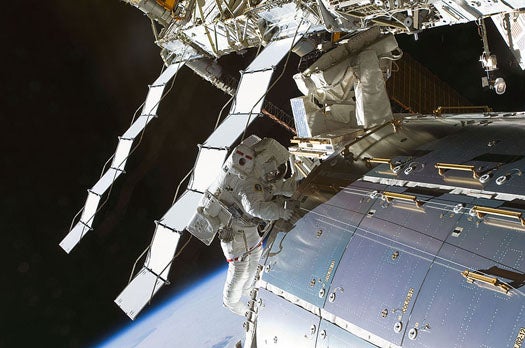 Bacteria taken from the scrumptiously named fishing village of Beer on Britain’s south coast have proven themselves some of the hardiest organisms on Earth — or in space for that matter. Bacteria found in rocks taken from the cliffs at Beer have survived a grueling year-and-a-half exposure to space conditions on the exterior of the ISS and returned home alive, becoming the longest-lived photosynthesizing microbes to survive in space.

The bacteria were sent to the ISS as part of an experiment to identify potentially helpful microbes that could be used in life-support systems or bio-mining operations on future moon or Mars missions. The researchers didn’t select the bacteria specifically, but rather sent whole chunks of bacteria-laden rock from the cliffs to the station, where they were installed in boxes on the exterior of the ISS’s Columbus Laboratory.

Out there, the bacteria were exposed to everything from the wild temperature swings between day and night, cosmic radiation, extreme exposure to ultraviolet light, and the effects of the vacuum of space. For most living cells that’s a deadly cocktail, but while some bacteria in the rock died as they were pounded on by the harsh space environment, a colony of bugs known as OU-20 (they were sent up by the UK’s Open University) resembling the cyanobacteria genus Gloeocapsa survived.

It’s not exactly clear how they did it, but the survivors of the grueling 553-day trial are now back here on Earth for study. Researchers hope such hardy bugs could help future planetary exploration missions extract minerals from rocks or recycle waste on remote planets, allowing something like a permanent moon or Mars base to operate self-sufficiently.