The weirdest things we learned this week: Sheep on meth, hopping space robots, and the economy of “Frozen” 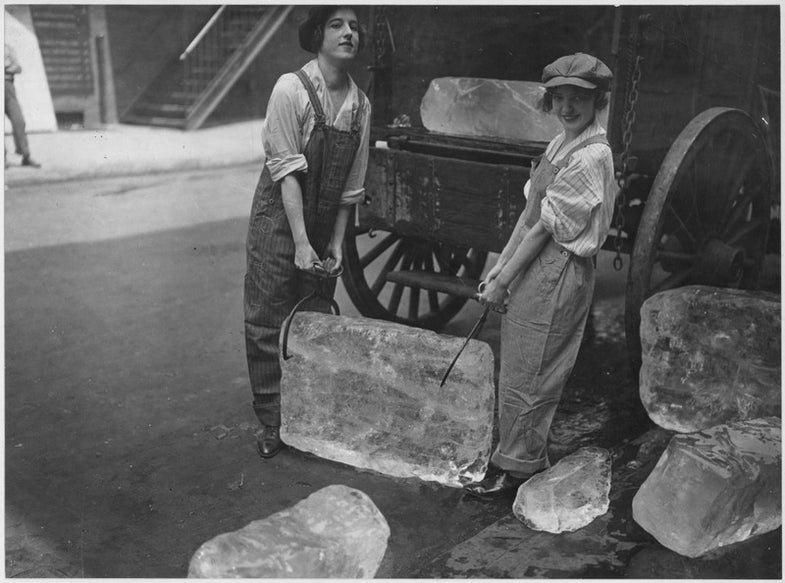 Ice delivery was a booming business—including during World War I, when women took over some of the manual labor. U.S. National Archives and Records Administration
SHARE

Fact: Ice was once a hot commodity

In 2018, ice is everywhere. You can make it yourself by putting a tray of water into the freezer. Or you can find one of those special fridges with an in-unit ice machine and wait for the cold stuff to simply plop out into your cup. But ice used to be much, much harder to get your hands on—and in the era before A/C, it was desperately desired. That’s why, for much of the 19th century and into the 20th, ice was the cold, hard heart of an international economy called the “frozen water trade.”

How did it work? In New England and other northerly regions, ice would be cut up from frozen lakes or brought down from mountain peaks. It would be insulated (though 90 percent was still somehow lost) and transported by ship, and later, in some places, by ice, around the globe. Boom towns arose on the banks of frosty rivers, the hardy carvers besieged by frostbite and knee injuries. Ever wonder what those singing Swedes were doing in the opening sequence of Frozen? They were carving ice. In the dead of winter. (Probably to be shipped to India!)

Today, when an unchilled beverage is a rare offense and there’s so much ice to go around we can do YouTube-d dunk challenges, the frozen water industry has a twinge of ridiculousness. But for Frederic Tudor, the industry’s founder, the Ice King himself, the man who was (probably) the first to say, “Stop, collaborate, and listen, ice is back with my brand new invention,” it was the foundation a fortune.

Fact: These robots are hopping around an asteroid and sending pictures home

When I got to write about this amazing picture I was instantly charmed by its photographer: a hopping robot currently bouncing around on another world like a tiny, majestic mechanical bunny rabbit.

Rover 1B—and its twin, Rover 1B—are part of the Japanese Hayabusa-II mission. They’re currently leaping around on the surface of the crystal-shaped asteroid Ryugu taking pictures and temperature measurements. They’re autonomous, which means they decide where and when to jump. But why jump? It turns out that because the gravity on asteroids is so low, rolling wheels would just send rovers floating off into space. So instead, internal motors push the little Roomba-like bots into the area above the asteroid and send them gliding for 15 minutes, taking them about 50 feet from their last position.

This is especially exciting for Japan, which had a rover planned for its first asteroid-visiting mission, Hayabusa, back in 2005. Sadly, the rover was released from the spacecraft and tumbled off into space. (If you click on that link, the rover is circled in yellow, floating away).

The current mission to Ryugu is just getting started. A more-powerful lander was just released to the surface today and while it won’t hop around as much as the rovers, it will still be able to right itself on the asteroid surface.

Fact: Octopuses on MDMA are way better than sheep on meth

After editing an article about a truly delightful study about how octopuses act on ecstasy, I found myself wondering what other research on critters and recreational drugs I could dig up. I found one example that intrigued me and another that totally horrified me! We’ll start with the bad news: back in 2010, researchers (funded in part by Taser International) shocked a bunch of methamphetamine-addled sheep to show that tasers don’t pose life-threatening risks to human drug users. Some animal research is important, and some is arguably harmless (those octopuses, for example, just got very huggy and then went back to normal), but this study definitely made me squirm.

On a less disturbing note, I was excited to learn that those super-meme-able photos of spider webs made under the influence are actually exactly what the internet advertises them to be. But does a spider’s inability to weave a normal web while hopped up on caffeine mean that drinking coffee is bad for your workflow? Not exactly.