New Neurochip Listens Closer Than Ever To Brain Cells Communicating

An updated version of a neurochip can monitor brain cells’ communications at the clearest resolution yet, according to scientists in... 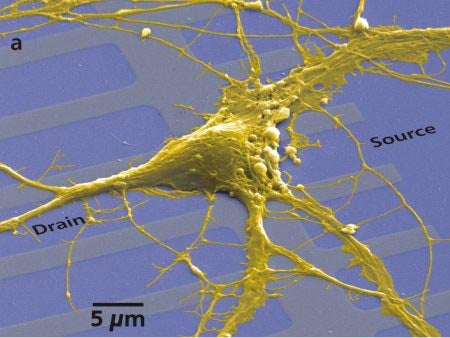 An example of a neurochip, which combines brain cells with a computer chip. Moritz Voelker and Peter Fromherz/ Max Planck Institute of Biochemistry
SHARE

An updated version of a neurochip can monitor brain cells’ communications at the clearest resolution yet, according to scientists in Canada. It’s cellular-scale mind-reading — or mind-listening, to be more precise.

The team at the University of Calgary was one of a handful of groups to first demonstrate it was possible to wire neurons into a computer chip, thereby sensing brain cells’ electrical communications. The goal is an improved understanding of how brain cells talk to each other, which could help scientists can design new drugs and therapies for neurological disorders.

Now, UC professor Naweed Syed’s research team has an updated neurochip that drills down into the brain’s smallest, most complex communication systems — the level of ion channels and synaptic potential, according to a University of Calgary news release.

The team embedded a recording device beneath the neurochip, and developed an amplification system that allows them to hear the electrical activity taking place among the cells, as
The Globe and Mail reports.

If scientists can “hear” what the cells are saying, they can quickly test the efficacy of drugs for patients with various brain disorders, Syed says.

The research was reported early online this week in the journal Biomedical Microdevices.

[University of Calgary via PhysOrg]