SpaceX’s cheap internet could cost us the night sky

Reusable rockets make launching satellites affordable, but they could brighten our skies to a fault. 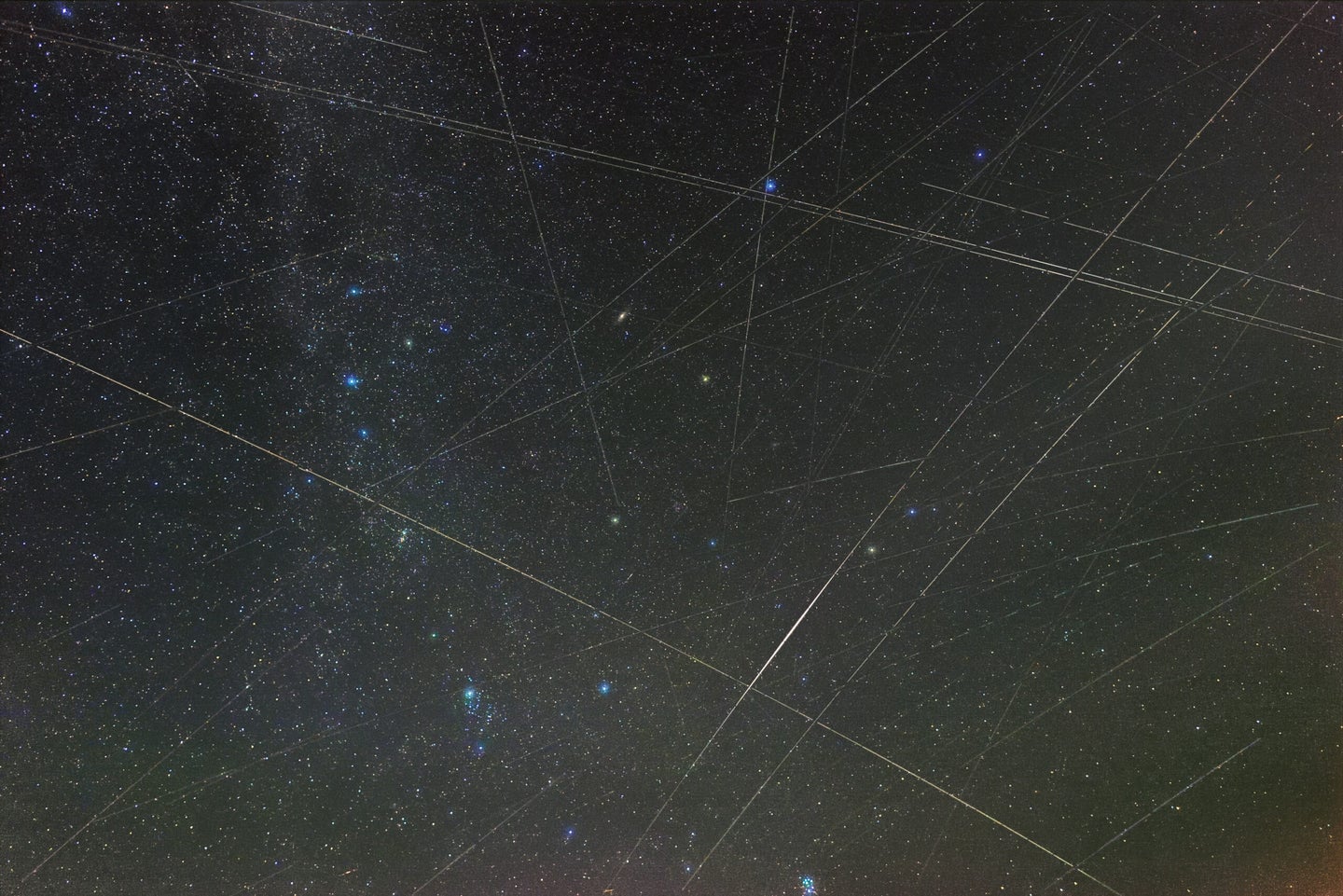 The Earth just gained five dozen new artificial satellites. The newcomers represent a drop in the bucket compared with the thousands of functional machines already up there, but also an early raindrop in a deluge of tens of thousands to come.

Private space company SpaceX, which launched the satellites on Monday, is driving the orbital boom with its construction of the Starlink constellation—a flock of satellites that will eventually number in the thousands intended to blanket the planet with internet access. But while the enterprise will increase connectivity here on Earth, astronomers fear it will sever them from the rest of the universe, filling the night sky with unavoidable streaks of light. Such vast assemblies have been prohibitively expensive in the past. But Monday’s launch featured SpaceX’s most reusable (and frugal) rocket yet, and the company appears to be capable of singlehandedly changing our local space environment.

SpaceX launched the stack of satellites, each weighing 500 pounds, from Cape Canaveral on Monday morning, releasing them into orbit 174 miles above the Earth. They will continue to spread out, extend their solar panels, and rise into higher orbits over the following days. There, they’ll join a batch of prototypes from a previous launch, making for a current constellation just shy of 120 working satellites.

After the last Starlink launch in May, strings of satellites glowing with reflected light from the sun as they paraded across the sky delighted some observers. But the astronomical community, which has spent decades designing and building sensitive optical equipment tuned to pick up the faintest of glimmers from across the galaxy and beyond, sees the same sight as a menacing threat to their enterprise. Until recently, such low and bright satellites numbered only in the hundreds, according to the International Astronomical Union, which posed little risk to observations and nocturnal animals. But Starlink and similar constellations could rapidly change that.

“We do not yet understand the impact of thousands of these visible satellites scattered across the night sky and despite their good intentions, these satellite constellations may threaten both [astronomy and wildlife],” the Union said in a statement.

Eager to fund its Martian ambitions, SpaceX hopes to start selling internet service made possible by its satellite constellation sometime in 2020. CEO Elon Musk has already tweeted via a Starlink connection, and the company plans to ramp up fast. Monday marks the first of nearly every-other-week launches planned to push the constellation size past 1,000 satellites over the next year. The constellation’s planned size has swelled from 12,000 satellites to more than 40,000, paperwork submitted to the International Telecom Union revealed last month. That’s twenty times the total number of working satellites currently in orbit from every nation combined. Space is about to get crowded.

Astronomers are scrambling to see how the influx of night lights will affect their operations. An earlier simulation found that the original 12,000-satellite version of Starlink would make the upcoming Large Synoptic Survey Telescope—a billion dollar venture—unusable about 20 percent of the time, Shannon Hall reports in the New York Times. Researchers are currently updating their calculation to see what the company’s new plan will do to theirs. SpaceX, for its part, has said it will work with astronomers to take steps such as painting the satellites black to reduce their shine.

The constellation may affect the general public too. Once completed, the global sky will contain four to five times more Starlink satellites than it will visible stars. In fact, 500 satellites will be simultaneously visible from certain points, according to calculations by astronomer Alex Parker. Urban dwellers who count themselves lucky to see Jupiter on a good night likely wouldn’t notice, but rural stargazers could experience a drastically different night sky. “I’ll wait to see what happens when they reach their operational orbits, but my heart sank when I saw those first pictures,” Parker wrote on Twitter after the first launch.

Musk believes that the satellites won’t impact astronomy, and that the economic benefits of a global internet represent a “greater good.” He has also tweeted that the future of astronomy lies in space anyway.

Monday’s launch showcased the reason why SpaceX can afford to assemble space infrastructure on such an unprecedented scale, setting not one but two records for rocket reusability. The bundle of satellites flew on a Falcon 9 whose booster stage was being launched for a record fourth time. The booster went on to make its fourth landing too. “These boosters are designed to be used 10 times,” said SpaceX Starlink engineer Lauren Lyons during launch commentary according to Space.com. “Let’s turn it around for a fifth, guys.”

The protective capsule that carried the satellites at the nose of the rocket, known as the payload fairing, had been to space before too—another first for the company. The nose cone originally ferried a communications satellite for the Arab League into orbit on a Falcon Heavy in April, after which SpaceX was able to recover and refurbish the fairing. Over the summer SpaceX started successfully catching more of its fairings (which cost $6 million each, about 10% of the $62 million sticker price for a launch) with a giant net before they hit the corrosive seawater, making future fairing reuse more likely.

The Falcon family, however, will never achieve full reusability, since the upper stage returns from orbit too fast for recovery. For that milestone, SpaceX is betting everything on its next generation system, the more maneuverable Starship spacecraft and Super Heavy booster. Despite being able to hoist more than four times as much stuff into orbit as the Falcon 9, Musk recently estimated that Starship launches will cost SpaceX about 30 times less than its semi-reusable sibling, coming in at around $2 million dollars—roughly a million for fuel and a million for refurbishing the recovered parts and putting them back together.

SpaceX plans on retiring the Falcon family in the 2020s and relying exclusively on the reusable Starship system for all its space activities, from Mars missions to Starlink launches. No word yet, however, if all that extra launch capacity will be able to move the earthbound telescopes out beyond the glare of the expanding Starlink constellation.