Astronomers will need additional software, new cameras, and a lot more money to cope with Starlink. 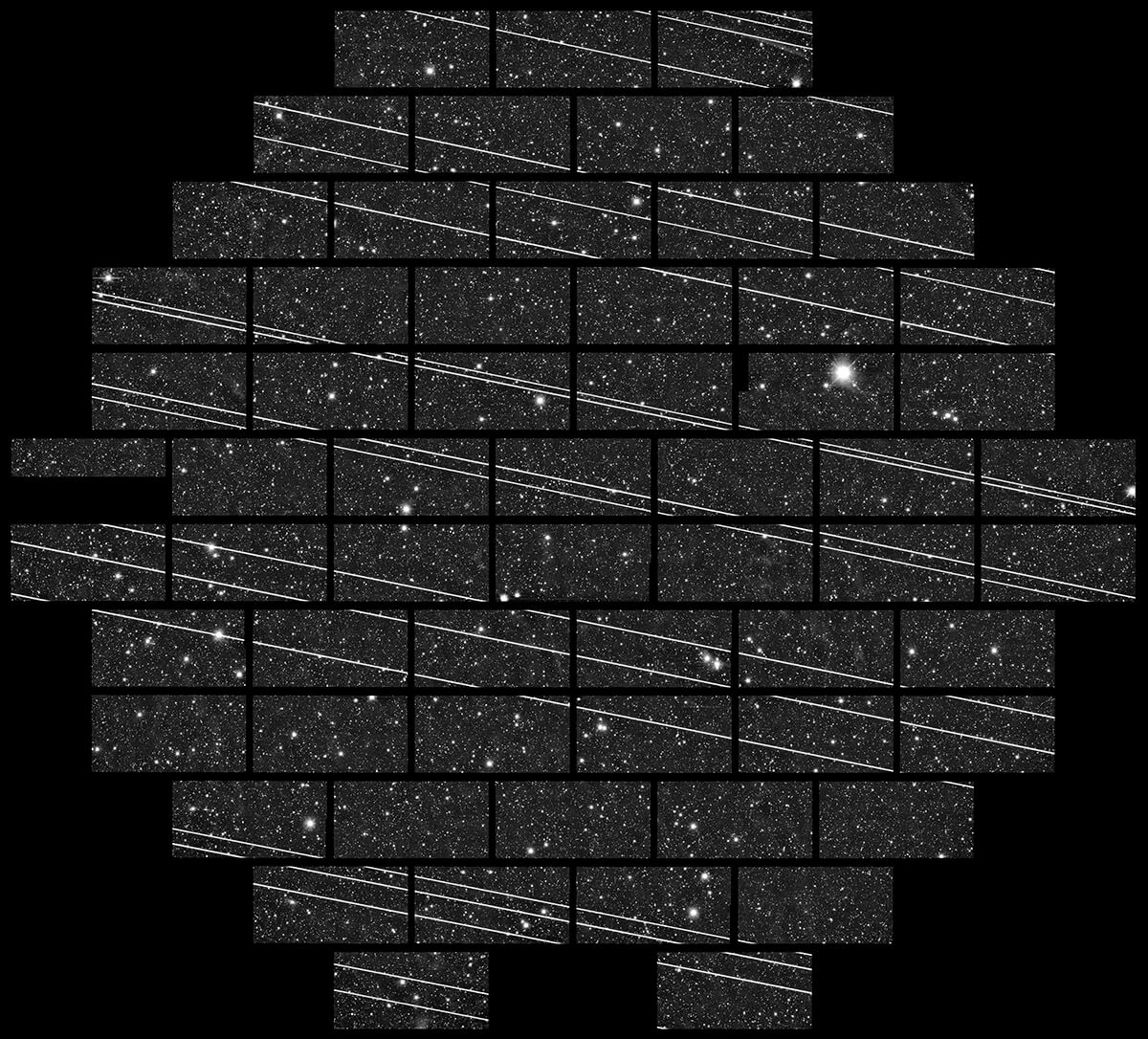 Summer star gazers in rural areas are used to seeing a handful of satellites streak across the sky. But in the coming years, eagle-eyed amateurs may be able to pick out hundreds. And for professional astronomers, research will never be the same again.

The race to blanket the globe in satellite internet is on. SpaceX leads with its fleet of Starlink satellites, which aims to provide high speed connectivity to anyone on the planet. The company has already placed more than 350 of the 570-pound, 30-foot wide machines into orbit, 60 of which launched on Wednesday. The company plans to eventually construct a “megaconstellation” of tens of thousands of satellites, with additional swarms to follow from Amazon and the UK company OneWeb. Ever since the first strings of bright new lights started passing overhead, astronomers have fretted about the future of their field. Now one of the most comprehensive analyses yet of the first 12,000 Starlink satellites brings both good and bad news.

The damage the satellites inflict on astronomical research will vary by project and observatory. The celestial newcomers don’t pose an existential threat to the field, but dealing with them will likely become a significant part of how astronomy is done in the future. “This is a wakeup call for astronomers generally to start thinking about the mitigations,” says Jonathan McDowell, an astrophysicist at the Harvard-Smithsonian Center for Astrophysics and author of the analysis.

SpaceX founder Elon Musk claims that Starlink will pose no danger to scientific progress. “I’m confident that we will not cause any impact whatsoever in astronomical discoveries, zero,” he said at a conference last Monday. “We’ll take corrective action if it’s above zero.”

The company is cooperating with a variety of astronomical organizations to minimize its influence on the night sky, but completely eliminating that effect appears next to impossible. In fact, the near-Earth environment is already undergoing an upheaval, according to McDowell’s report, which is under review by the Astrophysical Journal Letters. While thousands of satellites currently circle the Earth (many of them defunct), the zone SpaceX is targeting sits relatively empty. Before the first Starlink launch less than a year ago, there were just 400 large satellites (over 220 pounds) orbiting at low altitude (under 370 miles)—the kind that are easiest to see. Today, Starlink satellites have nearly doubled that number, and the network is only three percent complete.

A sky with 12,000 low-flying Starlink satellites in their current incarnation would look drastically different to the naked eye. McDowell built a simulation considering the satellites’ size, altitude, number, and observed brightness based on reports he commissioned from a network of amateur astronomers. He then calculated how many satellites would pass overhead at different points during the night, for various seasons and locations around the globe. City-dwellers won’t notice a thing, but according to McDowell’s model (which is based on SpaceX’s FCC filings), star gazers in rural areas would see the horizon swarm with hundreds of dim specks as sunlight glints off of the satellites’ metallic surfaces, dozens of them passing directly overhead. The exact number of visible satellites will depend on conditions but peaks in the hours after sunset during the summer—prime time for sky watching.

Fortunately for amateur astronomers, SpaceX is experimenting with painting the Earth-facing side of its satellites black to dim their reflectivity. The company launched its first “darksat” prototype in January, and it does appear to be about 2.5 times dimmer than its shiny counterparts, according to a pre-print published on Monday based on a single pair of observations. McDowell says that this reduction—if confirmed—would likely push the satellites right to the edge of human vision. You might notice a disorienting sense of movement if you squint hard enough, but you probably won’t be able to distinguish specks of light.

Astronomers are a diverse bunch, studying everything from local space rocks to distant black holes, and Starlink’s effects will be equally varied. Some research projects, especially those that operate late at night during the winter, will barely notice SpaceX’s additions. At these times, the sun lies entirely behind the Earth, and no reflective sunlight reaches the satellites. That came as a relief to McDowell. “I was unduly pessimistic initially,” he says, “but the fact that it’s not so bad in the winter is important. I was pleased and surprised to see that.”

The bad news, however, is the Starlink components will shine brightly in telescope mirrors during the first and last hours of the night when the sun hovers below the horizon, especially during summer. These conditions are ideal for observing objects near the sun, such as surveys that hunt for asteroids, including those that might someday collide with Earth. Projects like these just can’t be done on midwinter nights. If you restrict yourself to winter observing, McDowell says, “you’re losing half the sky essentially.”

With satellites launching at a monthly, and eventually bi-weekly cadence, McDowell suggests that researchers start preparing for the rapidly approaching Starlink future now.

The simplest way to edit out the unwanted streaks left behind by satellites is to use software. If astronomers take five pictures of a target, and if a satellite photobombs only a couple of frames, researchers can blend the photos together to erase the satellite. This method will work best for observatories with fewer satellites overhead, such as those deep in the southern hemisphere, and will come at the cost of valuable observation time to capture the extra data.

Other observatories will need specialized hardware. A system where small cameras surround the telescope’s main mirror in a ring, for instance, could grant the instrument a sense of peripheral vision. When the cameras spot a satellite coming, they could snap a shutter across the telescope’s field of view, temporarily blinding it until the spacecraft is gone. Projects targeting dim objects by using exposure times much longer than the momentary blips of passing satellites would benefit from this sort of scheme.

Ultimately though, each of the world’s many observatories will have to go through a period of trial and error while it works out which strategies best fit its location and specifications, and sees what problems crop up. “It’s going to change the environment so much that there will be unexpected consequences we haven’t thought of,” McDowell says.

But even if they can find the substantial funding needed to support longer observing runs and new hardware, there’s a limit to how much astronomers can adapt to a sky full of moving lights. At some point, if every image has multiple satellite streaks astronomy would just grind to a halt. McDowell suggests that researchers can learn to live with Starlink’s tens of thousands of darkened satellites, but stresses that in the long term astronomy will need an international treaty limiting the overall number if it is to survive.

“I think the compromise between astronomers and space explorers is that we have to work out some mitigations for a much more crowded sky,” he says, “but the space community has to ultimately set a cap on just how crowded that sky can get.”

SpaceX did not respond to a request for comment. But McDowell praises the company for its demonstrations of good faith, such developing the darksat and consulting directly with the Vera Rubin Observatory—a flagship facility coming online in 2022. He hopes that additional measures, such as painting the darksats’ antennas black, will continue to minimize the big shifts on the horizon.

“I’m mildly less worried than I was for the short term,” he says. “But it’s still a real change in the sky.”