Experts and companies agree: Methane is the rocket fuel of the future. 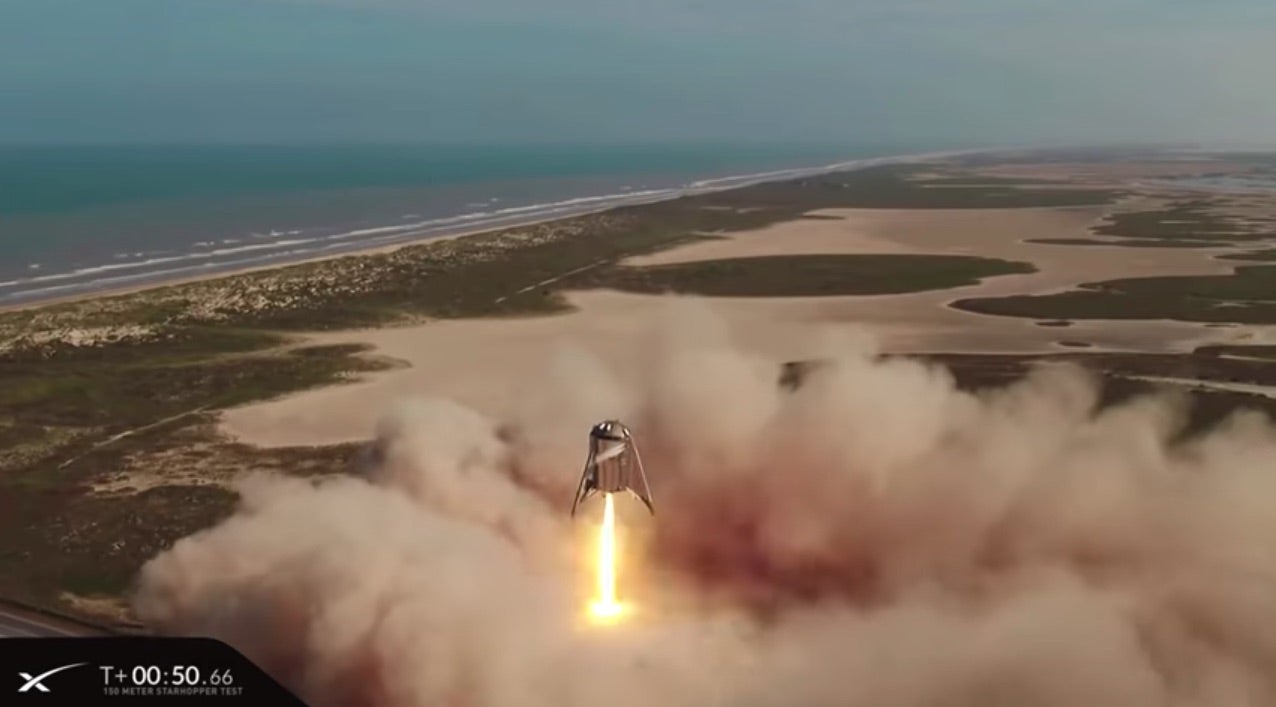 It was one giant leap for a silo-shaped prototype, one small hop for SpaceX’s Martian ambitions.

The 60-foot-tall “Starhopper,” a partial mockup of the vehicle Elon Musk hopes will one day land on other worlds, soared nearly 500 feet into the Texas sky on Tuesday afternoon. This second and final test flight represents the most significant trial yet of the company’s Raptor engine. While the trial frustrated residents in Boca Chica, many of whom evacuated their homes for safety concerns, it encouraged aerospace enthusiasts with its demonstration of a new type of rocket that runs on methane—an essential feature for a space program targeting the moon and beyond.

“People have talked about using methane engines for decades, and they’re finally here,” says Jonathan McDowell, an astrophysicist at the Harvard-Smithsonian Center for Astrophysics and spaceflight historian.

Tuesday’s flight was the latest run in a sequence of increasingly demanding experiments for the Raptor engine. After years of development, SpaceX began test firings with the contraption on its side and locked in place. It then followed with two more tests of the prototype nose up and tethered. The six-story, stainless steel cylinder finally flew freely for the first time in July, hovering a few dozen feet off the ground—although a cloud of billowing smoke obscured the vehicle for most of the time.

Tuesday’s round marked SpaceX’s second flight attempt this week—a day after an electrical issue stopped the Raptor’s igniter (like a spark plug for rockets) from setting off the controlled explosion just as the countdown hit zero. The more recent, successful test showcased the engine’s capabilities in a clearer light. It rose about 50 stories into the air, appearing to hover above the mottled brown and green landscape before touching down on a nearby pad. The full flight clocked in at 57 seconds.

In addition to tens of thousands of online viewers following various livestreams, a number of Boca Chica residents watched the hop too—although not necessarily out of interest. Fearing that a “malfunction” such as an explosion could shatter windows in nearby houses, the police department handed out fliers asking people to leave their homes (with their pets) when they heard the wail of a siren, ten minutes before flight.

Rocket scientists and aficionados, however, embraced the display of technology that will likely power the next generation of spacecraft. The single-engine Starhopper is a baby step toward the full vision: a 35-engine booster rocket (the Big Falcon Rocket) and a six-engine “Starship” spacecraft that Musk hopes will someday carry people to the moon and Mars.

“This is a key test of the Raptor in flight,” McDowell says.

The Raptor replaces the company’s Merlin family of engines, which ran on a refined form of kerosene, like most traditional rocket engines. The oil emerged as the industry favorite in the 1950s because it offered the most push per pound of fuel. Methane, however, has other advantages. In addition to producing fewer toxins, it’s the obvious choice for anyone who wants to leave this planet—and its abundant stockpiles of energy—behind.

Even if Mars were somehow hiding an unexpectedly rich fossil record, petroleum, the source of kerosene, needs a lot of processing to be turned into rocket fuel. Future astronauts could manufacture methane on Mars, though, by shuffling around the carbon and hydrogen atoms in the planet’s naturally occurring ice and CO2-rich atmosphere, McDowell explains. Leftover oxygen atoms could be turned into liquid to make up the other half of the explosive formula. Looking even farther out into the solar system, the compound appears to be everywhere. “In the lakes of Titan,” McDowell says, “you can put in a teacup and scoop up some methane.”

NASA has fired methane rockets on the ground and with small aerial craft before, but this week’s SpaceX flight cues their debut on a large-scale vehicle intended for orbit—putting the commercial company on track to be the first to use them for suborbital and orbital flights, possibly as soon as 2020.

But Musk and his team will have competition. Blue Origin, an aerospace company run by Jeff Bezos that’s also developing reusable rockets, has similarly chosen methane as the fuel for its BE-4 engine. The company carried out firing tests at full power in early August and hopes to use the model to push its upcoming New Glenn vehicle into orbit in the early 2020s.

Now that SpaceX has gotten its Raptor off the ground, the next technical hurdle will be turning what looks like a “flying water tower” into a proper spacecraft that can withstand the heat generated by hurtling through the atmosphere at multiple times the speed of sound. The engine will also have to prove itself under various air pressures at different altitudes, as well as in the vacuum of space.

These environments aren’t likely to foil SpaceX’s veteran engineers, McDowell says. Instead, he thinks the real test of the Raptor’s design will be whether unforeseen bugs like corrosion or clogged fuel lines crop up during the longer firing durations needed for it to actually travel somewhere.

Nevertheless, McDowell expects that between SpaceX and Blue Origin, a new era of rocket engines is on its way. “Methane engines are coming,” he says, “and this is the first real serious free flight.”