NASA and SpaceX pulled off their first rocket launch. Watch every second of it here.

The first crewed launch from American soil since 2011 went smoothly after the initial scrub. 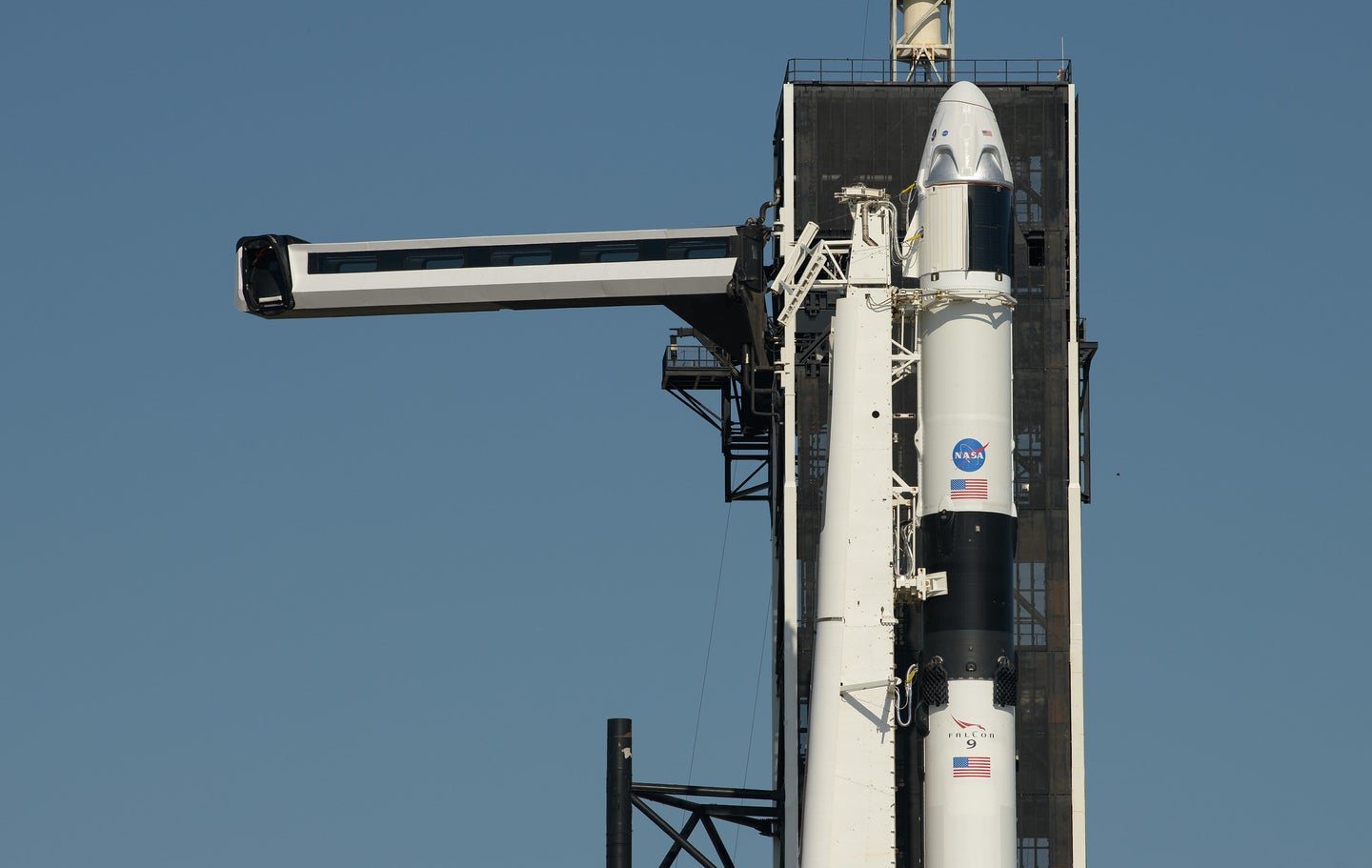 Update 6/1 at 8:33 am EST: The launch proceeded successfully on 5/30 after being scrubbed on 5/27 due to weather. Both astronauts have now boarded the International Space Station.

At 4:33 p.m. ET today, a classic scene may return (weather permitting) to Cape Canaveral after a nine-year hiatus. Two astronauts will don flight suits, climb into a vehicle perched atop a powerful rocket, and blast off toward the International Space Station (ISS).

If all goes according to plan—at time of this publication, chances of favorable weather hover around 50 percent—the mission will mark two historic milestones. First, space veterans Bob Behnken and Doug Hurley will become the first NASA astronauts to launch from American soil since the final Space Shuttle flight in 2011. And second, they will be the first human beings ever to fly to orbit on hardware designed, built, and operated by a private company—Space Exploration Technologies Corporation, commonly known as SpaceX. The mission represents a pivotal moment in an ongoing shift in how NASA handles crewed exploration, as well as a stepping stone toward a future where any well-heeled adventurer can purchase a ticket to space.

“In this new era, especially in low earth orbit, NASA has the ability to be a customer,” said NASA administrator Jim Bridenstine at a recent press conference, “one customer of many customers in a very robust commercial marketplace.”

NASA’s astronaut program has continued since 2011, and the agency has kept the ISS staffed by purchasing more than 70 rides on the Soyuz spacecraft from the Russian space program—pricey tickets that have cost the agency a total of around four billion dollars. But over the last decade or so, NASA has also invested at least three billion dollars in SpaceX and worked closely with the company to help it develop a vehicle—the Crew Dragon—capable of bringing astronauts to the space station. (The NASA program that funded SpaceX and others, Commercial Crew, has also awarded around five billion dollars to Boeing to develop its CST-100 Starliner spacecraft, which may launch with astronauts next year.)

“NASA has been an extraordinary customer, an extraordinary partner, and a mentor for us,” said Gwynne Shotwell, SpaceX’s president. “We’ve learned from them. We’ve obviously been pleased by their financial support, technical support, and knowledge.”

With the ability to reach orbit on their own terms restored, NASA officials hope to get more astronauts to the ISS, boosting the amount of research they can accomplish. They also look forward to having more flexibility: The cadence of available Soyuz seats has tended to set the duration of most missions at around six months in recent years, but the commercial crew vehicles may let the agency experiment with shorter and longer missions, according to Kirk Shireman, the program manager for NASA’s ISS program.

And it’s arguably an even bigger day for SpaceX. In 18 years, the rocket company has gone from startup to space heavyweight. It now carries out 70 percent of commercial launches worldwide, according to Bridenstine, and has also resupplied the ISS using its Dragon capsule 20 times. But founder Elon Musk dreams of establishing lunar bases and Martian settlements in the not-so-distant future, and building space metropolises will take more than food, tools, and materials. With today’s launch, SpaceX takes its first step toward moving people around the solar system—not just cargo.

While NASA has overseen more than 150 flights, this time will different because SpaceX will largely sit in the driver’s seat. NASA will participate in mission management, but the company will lead it, according to Steve Stich, the deputy manager of the Commercial Crew Program. That means that if the astronauts encounter a problem, they’ll be reporting it to SpaceX’s flight control team in Hawthorne, California, although NASA will be listening in.

Both organizations, however, have devoted thousands of hours of testing and training to minimize the chances of anything going wrong. NASA officials know the heartbreak of losing astronauts all too well, and SpaceX employees are keenly aware of the heavy responsibility that comes along with flying human beings. At their technicians’ own request, SpaceX started attaching photographs of Behnken and Hurley to every work order, according to Shotwell, keeping the unprecedented stakes of this mission front of mind. “There’ll be a little sense of relief when they’re in orbit,” she said, and “more when they get to the station. I’ll start sleeping again when they’re back safely on planet Earth.”

After Behnken and Hurley launch, it’ll take them about 19 hours to chase down the ISS. Crew Dragon will fly mainly on autopilot during this period, although the crew will have two brief chances to take the wheel (which, in this case, is not a “wheel” but a collection of large touch screens). They will take control first when the spacecraft reaches orbit to test the capsule’s responsiveness to twisting and rolling commands, and then again when the vehicle is few hundred feet from the ISS.

The original plan had been to bring the astronauts right back home, but about six months ago NASA decided that since Behnken and Hurley were going all the way to the ISS, they might as well stay awhile. Simulations suggest that Crew Dragon can remain in space for 119 days before the trace amounts of oxygen that persist hundreds of miles above the Earth’s surface degrade its solar panels. SpaceX and NASA will keep an eye the craft’s performance, and will determine the mission’s length by weighing the tradeoff between keeping extra hands on board the ISS and completing the mission’s main goal: to demonstrate that SpaceX’s hardware, software, and mission management are ready for the big time. A successful end-to-end test will wrap up the experimental portion of the vehicle’s development, letting official operations begin with the subsequent flight, “Crew 1,” whose timeline will depend on how this flight unfolds.

“We should not lose sight of the fact that this is a test flight,” Bridenstine said. “We’re doing this to learn things.”

Some people might feel nervous at the thought of being the first to hurtle through space in a relatively unproven vehicle, but Behnken and Hurley act cool as cucumbers. They’re aware of the unique positions they occupy in the history of the crewed space program—Hurley flew on the final Space Shuttle flight in 2011, and Behnken helped assemble the ISS—but they remain too focused on the task at hand to wax poetic about it.

“You have to go in knowing as much as you can about the vehicle and procedures, hyper focused on making sure all the work is successful,” Hurley said. “From the historical perspective, we’ll let somebody else talk about that when we get back.”

Nevertheless, they’re honored to be breaking new ground. After the Mercury, Gemini, Apollo, and the Space Shuttle vehicles, Crew Dragon will become the fifth American spacecraft to carry human beings into orbit. “It’s probably a dream of every test pilot school student to have the opportunity to fly on a brand-new spacecraft,” Behnken said.

Behnken and Hurley, while not tourists themselves, are also serving as pioneers for the fledgling space tourism industry. In some sense, today represents SpaceX’s debut operating the world’s first “spaceline.” NASA is currently it’s only client, but a successful demonstration of crewed spaceflight could change that quickly. In fact, the company has already announced that seats aboard Crew Dragon will be available to the general public soon, and Hurley, for his part, says that’s exactly how it should be. “Just that look out the window alone is worth going in people’s minds,” he said. “Access to low earth orbit needs to get greater and less expensive, and I think this is part of that exercise.”

Crowds of hundreds of thousands of people gathered at Cape Canaveral to watch past launches, but this time around NASA is inviting all to participate in the historic moment online. The agency will host a variety of digital festivities, and the launch will be broadcast on NASA Live and SpaceX’s website. The SpaceX and NASA teams have adopted a variety of anti-COVID-19 measures, and Behnken and Hurley are well quarantined. All parties hope to keep space enthusiasts safe, too.

“We don’t want an outbreak” resulting from spectators clustering at Cape Canaveral, Bridenstine said. “We need a spectacular moment that all of America can see and all of the world can see, to inspire not just us who have been waiting for years for this but to inspire the generations that are coming.”