European and SpaceX operators avoided a satellite collision… over email

When it comes to space traffic control, the final frontier is wide open.. 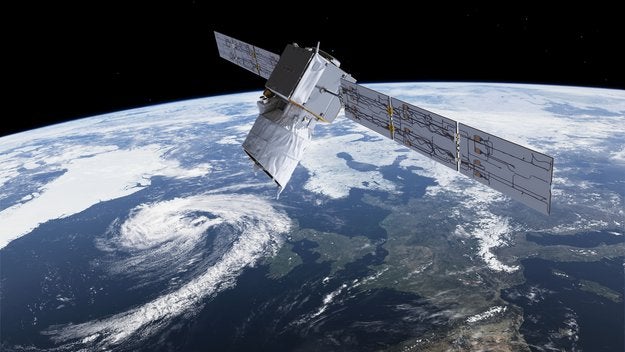 A European satellite dodged one belonging to SpaceX over the Pacific Ocean on Monday morning, hopping around the other spacecraft after a communication glitch left SpaceX unresponsive to follow-up messages.

While the odds of a collision remained low—never exceeding 1 in 1,000—the extraterrestrial game of chicken highlights the growing challenge of flying satellites through Earth’s ever-more-crowded orbital environment. Streets have stoplights. Airports have air traffic controllers. But space remains wide open, with European Space Agency (ESA) operators addressing Monday’s near miss the same way one might request a sick day—writing a polite email and hoping for a speedy response. As SpaceX and other companies build global internet networks using “mega constellations” of thousands of satellites, experts say only a better traffic control system can keep our space-based infrastructure from coming crashing down.

“I don’t think this is something we should consider normal in the 21st century,” says Holger Krag, the Head of Space Safety at ESA.

The U.S. Air Force’s 18th Space Control Squadron, which maintains the Department of Defense’s catalog of more than 20,000 crisscrossing space objects, notified the ESA about a potential crash (diplomatically called a “conjunction”) about one week in advance. The ESA gets hundreds of conjunction warnings every day, Holger says, and the risk initially looked too low to merit wasting precious fuel on a maneuver.

But the orbits of ESA’s Aeolus, which studies wind patterns, and SpaceX’s Starlink44, one of a 60-satellite pilot program for a future internet service, continued to inch closer. The collision risk reached 1 in 50,000 on August 28, prompting the ESA and SpaceX to exchange emails, but both agreed that evasive maneuvers would not be necessary.

The next day, however, the risk reached 1 in 10,000—the industry standard for taking action. ESA pinged SpaceX again, but heard nothing back. The ghosting didn’t bother the space agency, though, because they already knew that the Starlink satellite would be staying put—enough information to avoid a catastrophic hallway dance while they shifted their own course. “We actually like it that way,” Holger says. “Only one needs to take action.”

A SpaceX spokesperson said that after the first email exchange, a bug in the on-call paging system stopped them from seeing the rising risk estimates, and that had they been aware they would have communicated more with ESA to decide which satellite should move. “SpaceX is still investigating the issue and will implement corrective actions,” the spokesperson said.

The collision risk peaked at 1 in 1,000 on September 1, and ESA sent commands to get its satellite to safety. The next morning, half an orbit before its rendezvous with Starlink44, Aeolus fired its thrusters three times, boosting it up by nearly 1,000 feet. The satellite phoned home half an hour later and has since resumed its normal wind-watching activities.

ESA operators may have avoided creating satellite confetti this week, but Krag is worried about next time—and the many close-calls that will follow. SpaceX’s planned Starlink constellation alone would mean a ten-fold increase in the number of active satellites, and other companies plan to launch similar swarms.

As those numbers swell, operators will have to work harder to avoid pileups. The industry considers collision risks more likely than 1 in 10,000 worth spending fuel on, because even though one such event is rare, when they consider the hundreds of potential events each day the danger starts to add up. At the 1-in-10,000 level operators can avoid 90% of the risk with just a couple of maneuvers per year, Krag says, but that math will change as more satellites enter the fray.

And a single slip-up can have lasting consequences. Space debris has tripled since the year 2000, and just two events—a 2007 test where China intentionally destroyed one of its satellites and a 2009 crash between a pair of U.S. and Russian satellites—showered their respective orbits with enough junk to account for about a fifth of that jump.

A bunch of groups are working on ways to get the riskiest pieces out of the fast lane, but most experts—and the White House—agree that we need a better system to keep the machines that power our maps and timekeeping systems from becoming scattered clouds of expensive rubble. “We do not want to write emails anymore,” Krag says. “We need protocols and automated coordination.”

He first proposes assisting the Air Force’s tracking efforts with more accurate ground-based observations to nail down exactly where each object is. “You can [safely] fly within 10 meters if you know the accuracy to one meter,” he says.

ESA will also propose the development of a communication network and protocols—fixed plans for when a conjunction seems likely. Member satellite operators would all share the same information about location and speed, and, for instance, could even agree on standard movement plans so everybody knows what everybody else will do without ever crafting a polite email. Eventually, Krag hopes artificial intelligence could run the entire system autonomously.

He imagines such clever technological solutions will convince countries to opt-in to the network, but other experts suggest a more specific legal framework is also necessary. Chris Johnson, the space law advisor to the Secure World Foundation, says that any space traffic network will also need a way to resolve disputes and enforce decisions.

Future legal code should also specify what responsibilities each operator has, he says, such as staying on top of collision risk estimates rather than waiting for a message from the Air Force. For his part, he suggests that SpaceX’s communication glitch is an explanation, but not an excuse. “Could you tell an officer, ‘well, I didn’t know that I was speeding because my speedometer doesn’t work’?”

Developing better tracking and avoidance technology and agreeing to communal rules won’t happen overnight. In the meantime, maybe ESA and SpaceX should set up a Slack channel.