The birds are abandoning their old song with unprecedented speed. 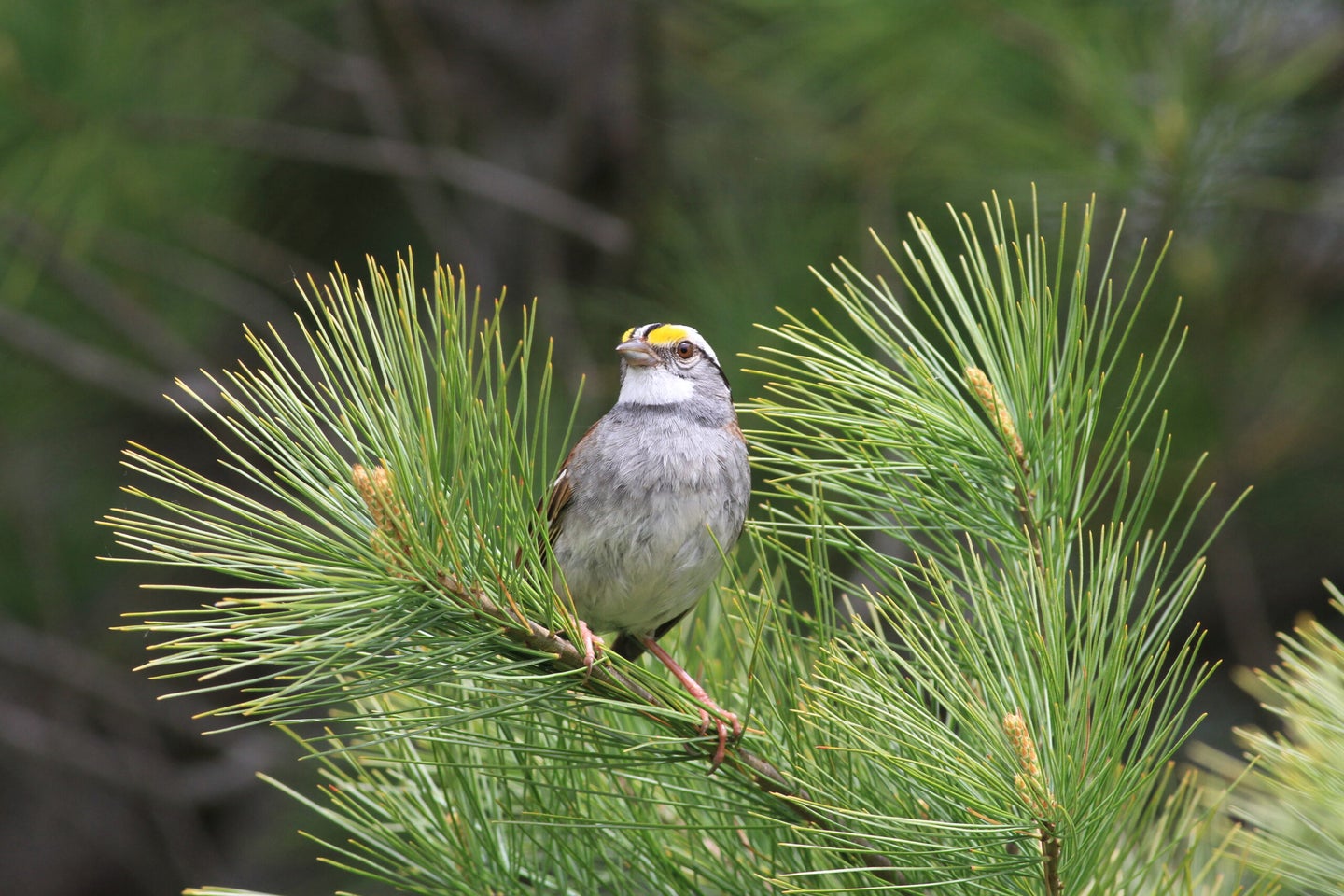 Researchers are tracking a potential new dialect of bird song that has swept rapidly through sparrows throughout North America. Scott M. Ramsay
SHARE

When ornithologist Ken Otter moved to Prince George in northern British Columbia in 1999, he soon noticed that there was something odd about one of the songs the birds in his new home were singing.

Otter was used to hearing male white-throated sparrows, which are common across much of North America, whistling a tune that ends with a repeating set of three notes, known as a triplet. But when he and his colleague Scott Ramsay, now at Wilfrid Laurier University in Ontario, listened carefully to recordings of the sparrows in Otter’s new home, they couldn’t identify the musical trio. They quickly realized that the birds were singing a different variant of the song that ended in a set of two notes called a doublet.

Otter, Ramsay, and their colleagues have been tracking this new dialect over two decades. During this time, it has swept across the continent and begun to replace the old triplet-driven version of the sparrow’s song. This appears to be the fastest documented case where a new dialect has caught on and spread to birds far and wide, the team reported on July 2 in the journal Current Biology.

“It doesn’t mean that this has never happened before,” says Otter, who is based at the University of Northern British Columbia. Nowadays, he says, it is easy and affordable for amateur birders to record bird songs and upload them to databases like eBird and Xeno-Canto, which Otter and his colleagues drew from to track the evolution of the white-throated sparrow’s song. It’s possible that other birds are also changing their songs quickly and we just haven’t noticed.

“Up until this point it would have been almost impossible to have detected this,” Otter says.

It’s not unusual for birds that belong to the same species but live in different areas to develop slightly different regional dialects, Otter says, but these songs “tend to stay fairly stable over space and time.”

In archival recordings of white-throated sparrows from across Canada in the 1950s, all the birds finished their songs with the traditional triplet ending. But sometime before the end of the century, the new version emerged and took over west of the Rocky Mountains.

To track the new dialect’s rise in popularity, Otter and his team examined recordings collected by scientists and volunteer birders over a 20-year span from 2000 to 2019. When the researchers recorded white-throated sparrows from across Alberta in 2004, they noticed that about half of the males were singing the version of the song with the triplet ending. By 2014, all the males recorded in Alberta had adopted the new two-note ending. Meanwhile at Algonquin Park in eastern Ontario, this new dialect went from being a rarity in 2005 to the chosen tune of nearly half the local males in 2017. By 2019, the new dialect had reached western Quebec, about 2050 miles from its first known recording in British Columbia.

Otter’s team suspected that the song might be spreading during the winter, when populations of birds from different areas may visit the same wintering grounds. To test this idea, he and his colleagues attached tiny backpacks equipped with trackers to a total of 50 sparrows that spent the warmer months in British Columbia. The researchers later recaptured nine of these birds and removed the trackers, which revealed that the birds had visited California and several states in the southern Great Plains, including Texas and Oklahoma.

These parts of the Great Plains are also known to be winter homes of white-throated sparrows that hail from as far as northwestern Ontario. This indicates that some sparrows from western populations where the new version of the song first emerged share their wintering grounds with birds from more eastern areas where the dialect has rapidly spread. This would have given a chance for the western birds to “tutor” their temporary neighbors in the new version of the song.

Why exactly this new dialect has taken the white-throated sparrow community by storm isn’t clear at this point. “We might expect that it might spread, but not take over,” Otter says. One possible explanation is that the female sparrows listening to these songs are drawn to the novelty of the new ending.

Within the past five years, yet another variation of the song has emerged and is spreading rapidly among sparrows west of the Rockies. Otter and his colleagues are tracking the new song, in which the birds adjust the volume of the doublet ending while they are singing. They plan to play recordings of both the new song and the outdated one with the triplet ending to see which version female sparrows prefer.

“There’s nothing necessarily particularly special about the doublet-ending song; it was just new,” Otter says. “It’s now the established one and it’s ripe for a new variant to come in and replace it and that seems to be what’s happening.”