Mystery Animal Contest: Who Is This Creepy-Handed Yelper? 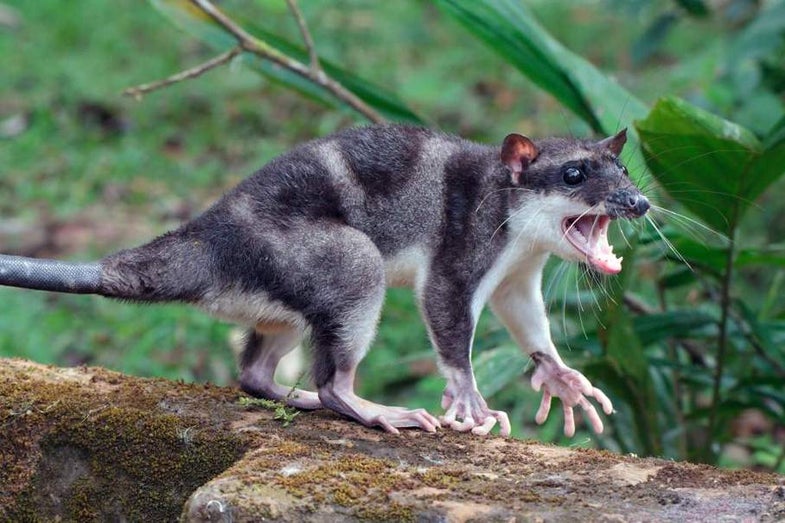 Update: We have a winner! @sqwerin correctly guessed that this is a water opossum, Chironectes minimus, which is otherwise known as a yapok. The water opossum is a marsupial native to Latin America, from southern Mexico through the northern part of South America. It’s much smaller and sleeker than the opossums we’re familiar with here in North America (namely the hideous yet impressive Virginia opossum), but has the same facial structure and some of the same habits.

That said, the water opossum is unusual in lots of ways! For one, it is the world’s only living aquatic marsupial. Marsupials aren’t afraid of the water and many are fine swimmers, but none spend the majority of their time in the water besides the water opossum. It has a bunch of adaptations to deal with a life in the freshwater streams and ponds in which it’s found; it has webbed back feet, its fur repels water and helps keep it buoyant, and its pouch actually seals shut to keep young dry while the mother is swimming. (The male has a waterproof pouch, too, but doesn’t keep young in it; its purpose seems to be keeping the male’s genitalia dry.) Its creepy, oddly human-like front feet are used to grab food, mostly crustaceans.

The water opossum isn’t particularly rare. It’s nocturnal, and its population is shrinking a little bit due to deforestation and water pollution, but it’s listed as Least Concern, so hopefully you’ll be able to see its weird little hands for awhile yet. Hi water opossum!